This past Thursday, we issued an OFFICIAL WARNING about a short-term breather for precious metals – we were thrilled to see it only lasted for 24hrs.

This is the MOST ROBUST we’ve seen both metals trading in just over a decade. If the year ended today, gold’s 29.6% return in 2020 would be its best since the year 2000!

Truly, this is one of the best years for the precious metals sector IN LIVING MEMORY.

As expected, when a special commodity like gold hits a new ALL-TIME HIGH, there’s media coverage as well as fast-building momentum.

You can see below that gold is IN DEMAND.

Silver, though, is the REAL STAR of the show in recent weeks. I’ve not seen CNBC, MarketWatch, Bloomberg or other major financial publications, like the WSJ or Barron’s, cover anything about its more than 100% return, since the MARCH LOWS or about the fact that the GDXJ and GDX are outperforming the NASDAQ 100!

All I’m hearing about is gold, and I’m telling you that’s NOT WHERE the major gains will come from, going forward.

Gold has double-digit upside, perhaps even low triple-digit since nobody knows where this currency stimulus experiment is going and when it is ending, but we do know ONE THING for certain: DOLLAR BEAR MARKET has arrived!

The chart below leaves no room for debate on this matter; the 10yr trend-line has broken and we anticipate it reaching as low as 60, a 33% decline from today’s value (that’s a MASSIVE PULLBACK in the currency sphere) 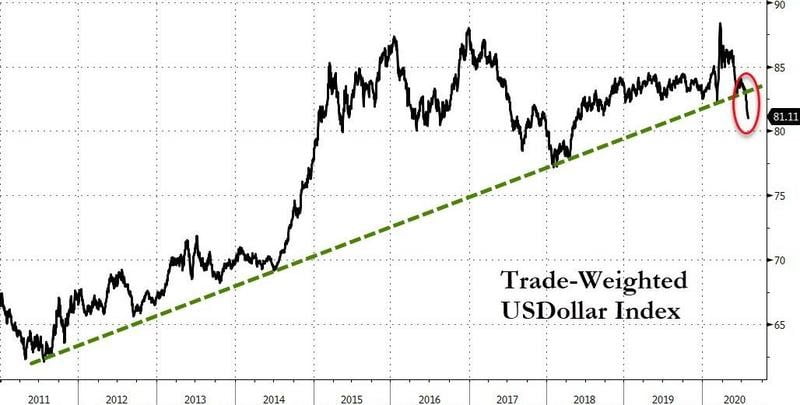 There is still $5,000,000,000,000 parked in money market accounts – a RECORD-HIGH. In the coming weeks and months, as more evidence COMES OUT that Covid-19 is easily cured by using READILY-AVAILABLE medicine when caught in the first five days, the public will go back to feeling safe.

Up to this present moment, I personally haven’t felt even a shred of doubt that this virus is a MEDIA BLITZKRIEG and that the facts do not align with the fear-mongering; don’t settle for what CNN and NBC are puking at you – research on your own.

One habit that I’ve practiced since the age of 21 is to CONSUME ZERO MSM programming.

I’m extremely grateful to the mentor who came into my life, and told me to SHUT MY EYES to what the traditional media focuses on and to only consume QUALITY CONTENT.

Using the garden as an illustration, he said that the MSM is like weed growth and that my job is to ROOT THEM OUT. 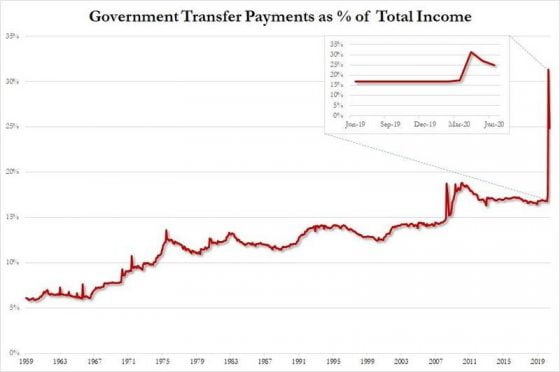 Most Americans, unfortunately, haven’t searched for mentors, so they get their REALITY PROPAGANDA from the media, which is literally engaged in DELIBERATE MISINFORMATION and has no regard for the truth.

The above chart is the result; a quarter of Americans get their income from the government, which gets its income partly from taxes, but mostly from ISSUING unsustainable DEBT.

I’m stunned how unprepared people are for the worst financial regression of their lifetimes.

We’re entering a decade of stagflation and 50 million people are unemployed.

The world has lost $10tn of GDP this year and this is my message to you: