Total Backfire: Watch As Stephen Colbert Alerts Audience To Comey Firing and Gets The Exact OPPOSITE Reaction He Was Looking For 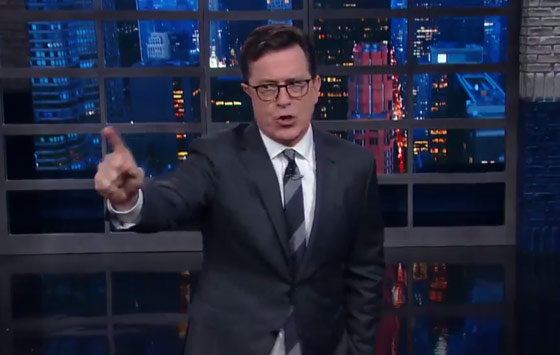 If the last 24 hours have proved anything about the Democratic Party and its constituents, it’s that they have no idea what media narrative they are supposed to be following.

On Tuesday, President Donald Trump fired FBI Director James Comey following numerous scandals. Comey has been blamed by both voters and former Presidential front runner Hillary Clinton for her failed election bid. As the election played out and Comey released information about the Clinton email investigation to the public, thousands had called for his termination, including many prominent Democrats.

But now that Trump has actually terminated America’s top cop, liberals the country over are totally losing their minds.

It’s quite a confusing situation if you are a Democrat. Are you supposed to support the firing of the man who has been blamed for single handily tanking Clinton’s campaign? Or are you supposed to be outraged that the lead investigator into Trump’s Russian ties has been removed from his position?

The confusion was highlighted by Stephen Colbert on the Late Show Tuesday evening. The comedian explained to the audience that the FBI director had been fired by Trump. Based on his reaction, he must have assumed his comments would be met by boos from the audience, but instead, everyone cheered, much to Colbert’s surprise.

He quickly tried to back-peddle and explain to the audience why it was actually a bad thing, but it was too late, because the moment, and his attempt to rewrite the mainstream narrative has been exposed:

As succinctly note by Twitchy.com:

Dems have gone back and forth on Comey so much even Colbert’s fans are unsure how they’re supposed to react on any given day.

@colbertlateshow Your crowd’s funnier than you, Steve

They’re not sure quite what to think or do and are awaiting further instructions about whether to cheer, protest, riot, or fashion some new hats to wear in outrage.