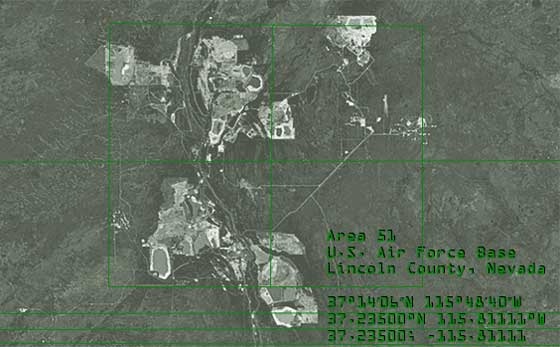 Few subjects boggle the mind more than the secrecy of the government.

And no place, among those which are known to exist, is more secretive than Area 51.

I’ve had friends and acquaintances tell me first hand about being detained by security personnel in black SUVs – just for stopping on the public road outside the perimeter. The territory is strictly controlled, and absolutely no one gets in there without authorization. What exactly is in there remains tantalizingly unconfirmed, and the subject of heated debate. Even Bill Clinton couldn’t get answers about what went on there, or if he did, he refused to enlighten the public when asked about it.

But while there hasn’t been disclosure, Google Timelapse has now revealed a decades-long build-up in stunning satellite imagery that proves at least this much – at lot is going on there, and its operations have been significantly expanded over the years:

Much more may be going on underground. Researchers have sniffed out massive construction of federal government and/or private contractor sites for underground bunkers, operations facilities and other preparations for the continuity of government after a major crisis.

Now, a Google timelapse has revealed how the mysterious base has developed over the past 32 years.

[…] It has long been fenced off from the prying eyes of the public, with armed guards swarming the surrounding area.

The timelapse reveals that the base has been gradually expanded and improved by the US military since the first photo, taken in 1984.

The original runway is now far wider and longer, with a large second runway now built further to the East.

The images suggest that the US government has dedicated a lot of construction to the North end of the base in particular.

And military engineers have steadily been digging into the mountain to the West of the base.

An excavation site clearly expands over the decades, though what it is being used for is unknown.

Famous machines developed there include the U-2 spy plane, SR-71 Blackbird, and the F-117A Nighthawk stealth fighter.

The update of Google’s Timelapse feature gives  a very clear view of the development – and tells what bureaucratic red tape could not.

The satellite imagery is telling, because the alleged activity that goes on there is consistent with the massive base expansion – which researchers have long-connected with covert experimental aircraft and advanced weapons technology.

At least some of the upgrades were specifically to keep the public out, and keep its activities absolutely secret.

The Groom Lake base was considerably expanded in the 1980s. The main runway (14/32) was extended to the south, and then a huge northernly extension built out onto Groom Dry Lake, today having a length of 27,000 feet.

A smaller parallel runway was built in the early 1990s. Semi-recessed “scoot and hide” shelters were built on the main taxiway so that secret aircraft could be more easily hidden from spying satellites overhead.

New radars, satellite telemetry and other communications facilities were installed, and extra warehouse and assembly areas constructed. The base housing area was completely rebuilt, accommodating up to 2,000 people, and an extensive recreational facility provided.

Today, Groom Lake seems to be administered by Detachment 3 of the Air Force Flight Test Center at Edwards AFB.

Perimeter security was also increased. Until 1984, it was easy to view the base from Bald Mountain and other hills in the Groom Range to the north of the lakebed. The USAF then extended the Nellis Range military reservation to cut off the view…or so they thought! Two hillsides to the south of the Groom Range still offered a view of the base from 12 miles away. White Sides Peak and Freedom Ridge, these points were annexed by authorities in 1995.

Clearly marked but not actually fenced, the entire boundary of the base is patrolled by an anonymous security force equipped with high-tech surveillance gear.

While many speculate that is the ground zero of the alien cover-up, it is clear enough that it is the home base of many sited “UFO” aircraft – a phenomenon reported by a significant number in the public that has not been sufficiently explained.

It is a fact that black ops military contractors EG&G and Douglas Aircraft are connected to the base’s top secret affairs, and have been deeply involved in stealth aircraft, UAV drones and, perhaps, other things of the weird. Many have connected this clandestine aircraft with unexplained sightings.

Biblioteca Pleyades.net and Above Top Secret have reported on what is known about the secret and fully classified work that goes on at Area 51:

There is much circumstantial evidence to link Groom Lake with (at the very least) experimental high-Mach vehicles. It has even been claimed that a new mother/daughter combination like the A-12/D-21 has been flown, known as the Super Valkyrie.

Evidence from base-watchers and elsewhere also suggests other top-secret, Special Access Programs that have been conducted at Groom Lake in recent years:

• High Altitude Stealth Reconnaissance: Large subsonic long-endurance vehicle jointly developed by Lockheed and Boeing to replace the SR-71’s ability to overfly denied territory at will. Based on the Skunk Works failed bid for the Advanced Tactical Bomber (ATB) – the B-2, it was cancelled in 1992 after at least $300 million had been spent, and replaced by the Tier 3 Minus UAV (Lockheed’s Darkstar).

• Stealth Helicopter: Different designs with emphasis on low blade and transmission noise, also exploring new technology to reduce blade and efflux signature. (Sikorsky’s new attack helicopter, the successor to the Apache – the Comanche, incorporates stealth technology, but this is being tested elsewhere.)

• Cloaking Technology: Cloaking technology in the form of electrochromatic panels mounted to aircraft has been revealed as being tested at the Area 51 installation.

There are many more questions than answers, but clearly this is an extremely busy installation, and the lid may come off of the secrets that have been contained there throughout the post-WWII period.

Elite Feverishly Building Survival Bunkers: “Fear of Uprising From the 99%”