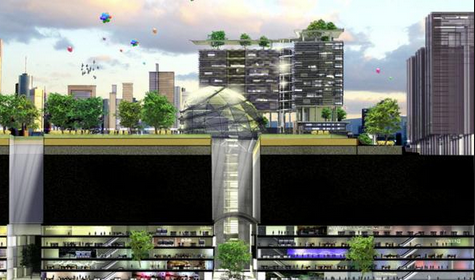 As populations grow into cities across the globe, and increasing majority of people will live in urban areas – places which quickly become very desperate and vulnerable during a major crisis.

Every prepper knows the dangers of being stuck in a major metropolitan city in the event of a major hurricane, a grid down scenario or civil unrest and societal collapse.

In such a situation, as every prepper knows, food, water and other vital resources will quickly become scarce or unavailable. The gridlock of survivors trying to get out, or get their hands on assets.

Increasingly, the Pentagon is looking at the likelihood – perhaps the inevitability – of war/conflict inside of a destabilized or decimated megacity urban center like New York.

The Pentagon is calling for help from technological innovators to take on the future of warfare.

In the program titled ‘Thunderstorm Spiral,’ the US government solicits demonstrations to tackle the challenges of megacities and underground environments, which will become increasingly prevalent as populations continue to grow.

A megacity is defined as a city with more than 10 million residents. To put this in perspective, there are currently over 8 million people living in New York City.

As these numbers continue to grow within defined areas, infrastructure will have to adapt, pushing megacities toward the development of subterranean – or underground – environments.

To meet these needs, the Deputy Assistant Secretary of Defense for Emerging Capability and Prototyping, Rapid Reaction Technology Office (RRTO) Technology Demonstration Program is sponsoring the request for information (RFI) issued by the Pentagon.

‘As the world’s population grows, the probability of the U.S. needing to conduct combat and humanitarian assistance / disaster relief (HA/DR) operations within a megacity (defined as a city with more than 10 million residents) also grows,’ the solicitation states.

The ‘desired capabilities’ in focus of the program include GPS techniques for underground and dense urban environments along with intelligence, surveillance, and reconnaissance sensors for use in tunnels.

As major American, Asian and European cities grow with extreme rapidity, urban planners have been expanding large underground facilities. Increasingly, it is not just subway systems, but shopping malls, parking lots, utilities and perhaps even residential units that are being built underground.

While this may be practical to facilitate crowded above-ground conditions, it brings new dangers for populations who could be trapped underneath in the event of a bombing, terrorist attack or major natural disaster.

The United Nations University has studied many of the disaster scenarios that could occur in underground spaces, noting the rapid growth of underground facilities in mega-urban areas across the world:

The rapid and extensive underground expansion of mega-cities – for subways, malls, parking and public utilities – takes place often with too little knowledge of associated risks and too few plans to minimize the effects of a natural disaster, United Nations University experts warn.

While many underground shelters can withstand earthquakes and other disruptions, flooding stands as one of the biggest and untested underground disasters cities may face in the near future:

Modeling a variety of catastrophic events is essential for building contingencies into underground infrastructure designs, including evacuations and the emergency containment and transport of flood waters, for example.”

Via underground interconnections, water can travel considerable distances away from the flood source. However, there are often no subsurface maps; underground space is usually mapped in relation to a building overhead.

Strategic relocation expert Joel Skousen and other prepping experts have warned against allowing yourself to be trapped in a major city – particularly on the East Coast – where evacuation may be nigh impossible. Being trapped underground in such a megacity only adds another layer of disaster to that recipe.

If you have your own underground structure, make sure that its design has accounted for flooding, because the possibilities are all too real.

Strategic Relocation: Where To Go When It Hits the Fan (Full Movie)