This Unusual Indicator Confirms That The Tech Bubble Has Burst: “The Answer Lies In Ping-Pong” 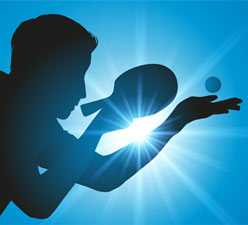 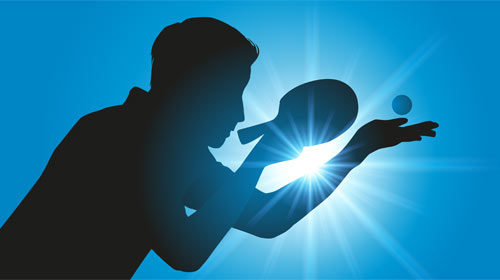 If you’re trying to figure out what the economy is doing and where financial markets are headed in the near future you can focus your efforts on a never-ending flow of charts, earnings reports and scores of daily analyses from professionals around the world.

But as it relates to the technology industry, namely those multi-billion dollar conglomerates and unicorn startups in Silicon Valley, a new report from Silicon Beat says that the answer may lie in Ping-Pong:

The table tennis game — as ubiquitous among Silicon Valley tech startups as free food and T-shirt attire — can be used to measure the market’s health, according to The Journal’s report.

Sales are down among local ping-pong table vendors, and many are blaming a downturn in the tech economy. Billiard Wholesale in San Jose reports sales to companies fell 50 percent in the first quarter of this year, compared to the quarter before. David Vannatta, sales team leader at Sports Authority in San Francisco, told The Journal that his ping-pong table sales have fallen since Christmas.

And big tech companies that have struggled with layoffs, shrinking revenue and lackluster quarterly reports, such as Yahoo, Intel and Twitter, have stopped buying tables, vendors told The Journal.

The Wall Street Journal explains that the phenomenon is real and tech companies all over Silicon Valley are pulling the plug on reckless spending, noting that startup funding has dropped 25% during the same period as ping pong table sales dropped:

In the first quarter of 2016, his table sales to companies fell 50% from the prior quarter. In that period, U.S. startup funding dropped 25%, says Dow Jones VentureSource, which tracks venture financing.

The table-tennis indicator is a peek into Silicon Valley culture, in which the right to play ping pong on the job is sacrosanct.

“If you don’t have a ping-pong table, you’re not a tech company,” saysSunil Rajasekar, chief technology officer at Lithium Technologies, a San Francisco software startup.

Table sellers seeing a decline include David Vannatta, sales team leader at Sports Authority in San Francisco. The store was getting a “good flow of tech companies” buying tables, he says, but sales have fallen since Christmas.

A visual, via the WSJ: 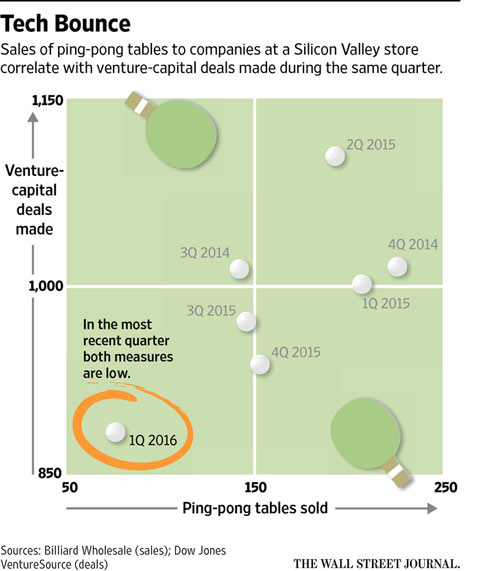 But if that’s not enough to convince you there are serious cracks in not just the tech bubble, but the system as a whole, consider that renowned investor Carl Icahn recently unloaded his entire stake in Apple, Inc., totaling some 45 million shares and now holds a massive short position potentially amounting to billions of dollars in expectation of a major market correction or crash:

When asked about this unprecedented bearish position, Icahn Enterprises CEO Keith Cozza said during the May 5 earnings call that “Carl has been very vocal in recent weeks in the media about his negative views.” He certainly has been, although many though he was merely exagerating. He was not.

“We’re much more concerned about the market going down 20% than we are it going up 20%. And so the significant weighting to the short side reflects that,”Cozza added.

And he’s not the only one who’s keeping his eye on the ping pong ball.

As reported by Zero Hedge, hedge fund manager Stanley Druckenmiller, who delivered average gains in excess of 30% for his clients over 25 years, has shifted assets into a defensive position in anticipation of what is an apocalyptic mood in financial markets:

If it wasn’t clear already, Drucknemiller is very bearish stocks: “volatility in global equity markets over the past year, which often precedes a major trend change, suggests that their risk/reward is negative without substantially lower prices and/or structural reform. Don’t hold your breath for the latter.”

The former Duquesne hedge fund manager, who averaged annual returns of 30 percent from 1986 through 2010, also agreed that negative rates are “absurd”, said that he is bearish stocks, and concluded by revealing what his biggest currency allocation is. “Some regard it as a metal, we regard it as a currency and it remains our largest currency allocation” he said, without naming the metal.

We know what he was talking about. Gold.

The smart money investors aren’t the only ones preparing.

The elite around the world are downright terrified, as highlighted by their feverish pace to build emergency bunkers in an effort to insulate themselves from the revolution, rebellion and anarchy that would follow a widespread economic collapse.

You’d think they might be crazy for going to such extremes, but they aren’t alone. The US government has been simulating economic collapse and civil unrest scenarios since just after the Crash of 2008, which suggests they, too, are expecting nothing short of a national apocalypse when this thing blows.

As for the rest of us, if you haven’t already taken steps to prepare for the disaster to follow, now is the time. Major global investors are re-allocating their financial positions, the elite are already getting out of Dodge, and the U.S. government itself is stockpiling emergency supplies and, quite literally, billions of rounds of ammunition.

But don’t worry because President Obama saved the world from depression, so these people must be overreacting to all of that peddled fiction about the world being in crisis.

Prepare For Collapse: A Step-By-Step Guide