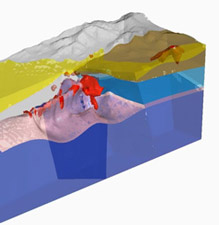 For decades, the standard practice used for prospecting hard gold deposits have been limited to identifying surface level geophysical anomalies by sight, locating mineral veins and then performing rock sampling to identify areas that may have viable deposits. Once identified, most companies began open pit mining operations to confirm their exploration results. The process is time consuming, costly, and more often than not, it fails to yield positive results. As a result, many companies that may have thought they were sitting on a gold mine turn out to be sitting on nothing more than a pile of sand.

But an innovative technology from well known geologist Wade Hodges may soon change that and could lead to massive gold discoveries at a fraction of today’s costs. As the CEO of Nevada Exploration. Hodges has been featured on the History Channel and already has 30 million ounces of gold discoveries under his belt. If he has his way, he’ll soon be adding more.

Nevada Exploration’s testing methods don’t touch the top-soil or underlying rocks like traditional exploration companies, but rather, focus on the one element we find almost everywhere – ground water. The methodologies focus on looking for gold anomalies in the water, which can then be traced back to the bedrock that contains the deposits. Hodges explains how he came up with the invention in a recent interview with The Daily Coin:

To me, the analogy is it’s 1849.. you’re a gold panner on a creek in California and you’re panning that gold… and you start looking furiously for gold in riverbeds… and eventually you realize that gold in the riverbed is only the tip of the iceberg and it leads you to gold in the bedrock…

Fortunately we have their experience… I’m standing in a place called Fletcher Junction with a very high gold and groundwater anomaly… this is like me and the gold pan… maybe this gold-in-groundwater chemistry is going to lead me to the gold in the bedrock.

To date the company has added some 230 Nevada gold claims, indicating that they may have already identified potential spots. And tests on existing gold mine deposits suggest that their groundwater chemistry exploration programs are accurate over 90% of the time.

There are hundreds of mines that have been abandoned in Nevada and around the world because preliminary exploration was unsuccessful. It’s quite possible that the gold deposits are there, but the technology to identify their exact location wasn’t available. In a previous interview Hodges explains how his groundwater chemistry exploration may be the game changer the industry has been looking for:

There is no doubt there are more gold deposits to be discovered. The problem is they’re going to be located where you can’t see the rocks. So what you have to focus on – the root cause here – is to figure out a way to see beneath the ground cover.

The one medium here that everyone is aware of but nobody has paid attention to is ground water. It’s everywhere in the State of Nevada even though it’s a desert. There’s plenty of water in all the basins. It’s just underneath the gravels and it’s in contact with all the bedrock. So, chemically it’s a medium which can transmit a scent from the gold deposit that’s hidden by the sand and gravel, into the groundwater.

You can then potentially follow it back to its bedrock source.

Hodges says that his company has been able to demonstrate that the process can be applied “consistently and systematically” across various target areas.

If he’s right, then the state of Nevada may soon see another gold rush.

Learn more about Wade Hodges, his company Nevada Exploration, and see how the exploration technology works.

Visit The Daily Coin for more interview like the one you just watched.