This Is How Fast It Happens: Watch As Security Guard Shoots and Kills Bank Robber 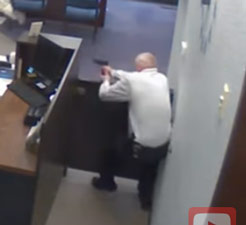 When Laurence Turner entered the Rockford Bank in Illinois he thought he’d be walking away with a bag full of cash.

The armed robber brandished a weapon as he walked quickly through the front door of the bank, only to be met with an immediate and deadly response from security guard Brian Harrison.

Watch the incident unfold on CCTV from three angles:

Turner died after collapsing in the doorway of the bank as he tried to escape.

Police say Harrison acted in self defense and will not be charged.