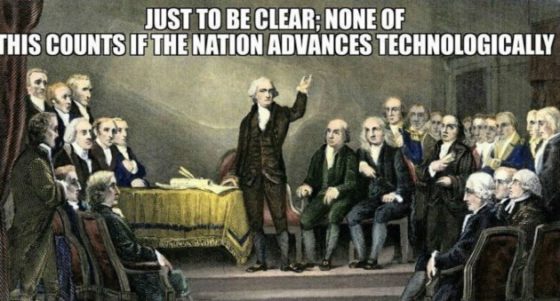 *Said no Founding Father, ever

In New York (the state, not just the city) there’s a rather Orwellian gun bill on the table that would require would-be firearm purchasers to turn over 3 years of their social media history and one year of their internet search history if they want to buy a gun.

“A three-year review of a social media profile would give an easy profile of a person who is not suitable to hold and possess a firearm,” said Brooklyn Borough President Eric Adams, who has proposed the legislation with New York State Senator Kevin Parker. (source)

Applicants to purchase a gun would be required by law to turn over their social media passwords to accounts like Twitter, Facebook, Snapchat, and Instagram, and they’d have to allow police to see a year’s worth of their searches on a year’s worth of searches on Google, Yahoo, and Bing. As well, anyone renewing their permit for a pistol would be subject to this invasive investigation.

Now, for those of you sitting there saying, “That’s fine, I don’t use social media and I use Duck Duck Go or StartPage” this is great – for now.

How long do you think it would be before other outlets like blogs where you comment or these different search engines are added to the list of things that are searched? Trust me, if it gets passed, this is a greasy slide straight to the bad place.

What will the police be looking for?

According to a write-up on the Democrat and Chronicle, a daily newspaper in Rochester, NY:

Police would be required to look for evidence the applicant searched for or used racist or discriminatory language, threatened the safety of another person, inquired about or alluded to an act of terrorism, and, finally, “any other issue deemed necessary by the investigating officer.” (source)

Think for a moment about how much the investigating officer’s bias would come into play here. In some ways of thinking, people who say “all lives matter” are considered the epitome of racism even when taken out of context.

And what about a couple of women talking about a breakup using heated language in a conversation about the ex who has become the enemy? Are they really going to act on it or are they just blowing off some steam?

Then I think about my search history regarding terrorism – I’m a blogger, for goodness sakes. My search history is a dark place. What if you’re researching what kind of gun you want to buy and you’re looking up things like “stopping power” or some other thing the anti-gun folks consider “scary” that is a completely legitimate question in reality?

And “any other issue deemed necessary” is just far, far too broad to provide any comfort whatsoever that the investigations would be fair and impartial. All of this is completely subjective. Anyone with a dark sense of humor, regardless of their sanity or upstanding citizen-ness, is going to be in for a hard time.

This social media and search history bill is unconstitutional on so many levels.

If you think it takes a long time now to get a gun or a carry permit (it can be weeks to months in some states), imagine how long it would take if officers are poring over everything on your laptop for the past 3 years. People in those areas would be waiting for far longer to make a purchase they’re allowed to make by the Second Amendment of the constitution.

Then there’s the dirty little pre-crime aspect of the whole thing. Eric Adams, one of the founders of this bright idea, said it was just basic police work. “If the police department is reviewing a gang assault, a robbery, some type of shooting, they go and do a social media profile investigation.”

But as the Foundation for Economic Education points out, in those cases, police are investigating a crime, not trying to predict one.

First, comparing the search of a prospective gun buyer’s internet history to routine police investigations is odd. When an assault, robbery, or shooting occurs, police are investigating a crime. That is not the case with someone trying to buy a firearm; the buyer is simply trying to make a lawful purchase. This bill is closer to what one might call pre-crime, an idea that has served as a plot device in dystopian literature for more than half a century. (The 2002 Tom Cruise movie Minority Report, a story that centers around a state that has figured out how to stop crimes before they happen, was based on a 1956 Philip K. Dick novel.) (source)

This complete lack of privacy for gun owners is also concerning. Remember, it isn’t just new gun owners who would have to submit to this investigation – any gun owner who wants to keep his or her firearm in a place where permission must be renewed would be subject to an invasive search every time they were up for renewal. This, to me, slips into the realm of unreasonable searches, against which we are protected by the 4th amendment.

The right of the people to be secure in their persons, houses, papers, and effects, against unreasonable searches and seizures, shall not be violated, and no Warrants shall issue, but upon probable cause, supported by Oath or affirmation, and particularly describing the place to be searched, and the persons or things to be seized. (source)

Buying a gun is not a crime, which means there is no probable cause, right?

And who gets to decide whether something is hate speech? Ask any two people if a statement is hateful, and you’re likely to get two different answers. It all depends where you’re coming from. If some self-loathing, social justice warrior type is the one investigating versus some rigidly alt-right traditionalist, they’re going to see the social media commentary of a person very differently. You simply cannot make sweeping laws like this and leave the enforcement up to human beings who have their own biases without setting up a system of unfairness.

Additionally, there is the issue of defining hate speech, a notoriously nebulous term. (Europe has already shown where the road of state-regulated hate speech takes us.) What authority would determine what speech qualifies as “hateful”? To deny someone a fundamental right based on the state’s interpretation of “hate speech” would be an affront to constitutional principles. (source)

These people want to “protect” us right into dystopia.

But they don’t enforce the laws we already have.

They’re not even enforcing the gun control measures already in place.

The folks who want to make it more difficult for innocent people to exercise their second amendment rights should perhaps focus on the laws that are already in place instead of heaping even more of the onus on innocent people.

Several of last year’s mass shootings would not have occurred if those laws were enforced.

Nicolas Cruz, who shot up the high school in Florida. had serious mental health issues that were not properly reported and documented. Had they been, he would not have been able to purchase a gun – at least not legally.

And Devin Patrick Kelly, the guy who shot up a church in a small town in Texas, had a dishonorable discharge for violently assaulting his wife and child. Had the military reported this as they were obligated to do, he would not have passed the background check. He would not have been able to legally purchase those guns either.

We must ask ourselves this question seriously.

If we don’t enforce the gun laws that are already on the books, what good will more gun laws do?

More laws will mean that innocent people have a greater burden and that bad people will continue to flout the law with no fear of repercussions.

I don’t want to lose my right to protect myself just because government agencies aren’t taking seriously their responsibilities in preventing crimes.

Devin Kelley should not have been able to buy a gun according to the current laws. But the Air Force did not follow them.

Nikolas Cruz flat out told everyone he was going to be a school shooter. But the FBI didn’t do anything to stop him. He had years of history of mental illness and behavioral problems. But these issues were not reported to the database that would have prevented him from purchasing a gun.

Is the problem really with law-abiding, innocent gun owners? Or is it more reasonably with the authorities who aren’t abiding by the responsibilities charged to them and the people who are intent on killing? (source)

What good will more laws do? The proposed bill will cost extra money for anyone who wants to buy a gun, lengthen the waiting period, and rule out people based on the whims of the investigator.

Remember, these things never stop with just one state.

It’s easy to scoff and say, “Those crazy people in New York are getting what they voted for.” I know someone’s going to say it so there, I said it for you.

But that’s short-sighted, and dare I say, ignorant of the way the world works.

Look at all the states that have recently flipped from red to blue in the midterm elections. If you don’t think it could ever happen where you are, you’re not paying attention. Please keep in mind that I am neither a Democrat nor a Republican, but am referring to some party generalizations here.

Democrats, who tend to lean more toward gun control measures than Republicans, took over the House of Representatives in the midterm elections. They also won 7 governor’s seats that were previously held by Republicans. A Democrat won a Senate seat in Montana, for crying out loud, long known to be a conservative stronghold.

There has been hard blowback against President Trump which will leave ripples in future elections for decades. In fact, I don’t recall in my adult life ever seeing a president so hated, disrespected and maligned. And the people doing the most maligning are the ones with the biggest microphones – namely, the mainstream media and Hollywood.

It’s not a stretch of the imagination to suggest we could soon see a dramatic shift in the United States that will open the door to all sorts of controlling “greater good” kinds of things.

Greater good. You know, like searching people’s computers before letting them own or keep their guns.

All of these new gun control measures are a scary, Orwellian slope and we’re slipping down it a little more every day.