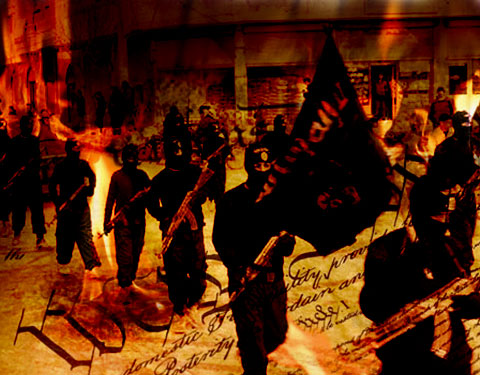 It’s difficult to quantify how much of an effect ISIS has had our collective psyches. Since this organization started making the news several years ago, we’ve been inundated with utterly horrifying stories about ISIS on a nearly daily basis. These people do things that are so wicked, it’s hard to believe that they were committed by human beings. Because of that, I suspect that long after ISIS is gone, their organization will be a talking point for decades in much the same way that Hitler and the Nazis are still brought up on a regular basis today.

Fortunately, it appears that ISIS is becoming history as we speak. All evidence suggests that the moment of collapse for the ISIS caliphate is rapidly approaching. In fact, the RAND Corporation recently published a report that spells out just how much ISIS has declined over the past few years.

The report found that ISIS, also known as the Islamic State, “has lost substantial control of territory and people since 2014 in Iraq, Syria, Afghanistan, Libya and Nigeria,” putting it in danger of losing its state, which it calls a “caliphate,” altogether.

But control over territory and people isn’t the only thing that makes ISIS a formidable terrorist organization. The group has recently been focusing heavily on external attacks, some of which are mounted without any direct orders from ISIS leaders.

RAND reported that ISIS has lost 57% of its territory and 73% of its population. And much more importantly, polls suggest that their support in the Muslim world is rapidly dwindling. ISIS isn’t just a terrorist group. It’s an insurgency that tried to carve out a state from Iraq and Syria, and no insurgency could have made it this far unless they had at least some support among the population. Now ISIS is losing that as well.

However, this encouraging news comes with a catch.

It’s important to keep in mind that the RAND Corporation is a major facet of the military-industrial complex. So what they think will happen after the caliphate collapses is very telling.

The group still has enough supporters, though, to be considered a serious threat to countries in the Middle East and around the world. Rand also found that ISIS attacks have shot up in recent months. The data suggests that ISIS “has begun to move from an insurgent group that controls territory to a clandestine terrorist group that conducts attacks against government officials and noncombatants,” the report said. This is the model of ISIS’ predecessor organization, Al Qaeda.

Though it seems that the US-led campaign against ISIS has been successful so far, ISIS remains a long way from extinction.

“Fully eliminating the threat the Islamic State poses will require continued American leadership for years to come,” the report said. “… In the short and perhaps medium terms, this contraction in territorial control may actually lead to more terrorist attacks across the globe. But over time, the group’s capacity to recruit, fund, organize, and inspire such attacks will likely diminish, and its brand may lose its allure if the Islamic State no longer controls territory in Iraq and Syria.”

In other words, the military-industrial complex is licking its chops. That’s because ISIS, which is largely a creation of the West, is about to replace Al-Qaeda as America’s elusive bogeyman. Long after their hellish caliphate is dead, they’ll be launching attacks on the United States from far-flung lands, which will surely be used as an excuse to decimate our freedoms, and drag us into many more wars in the future. A lot can happen between now, and when ISIS “loses its allure.”