They Are An Invading Army: “Let Me Explain What You’re Not Seeing Reported About The European Situation” 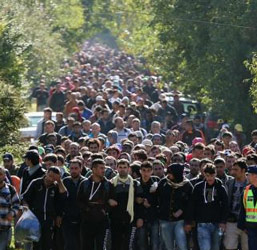 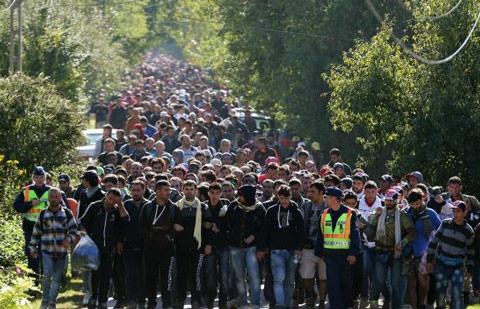 (As many as 10,000 people a day are flooding into Europe from the middle east)

In Europe, Right Now — Here, In The US TOMORROW
By Karl Denninger

Let me explain what you’re not seeing reported about the European situation right here, right now.

There are millions of immigrants coming into the EU.  Germany alone has apparently taken in close to 800,000.  The story being sold to the population is that these are just people from a war-ravaged part of the world seeking a better life.  The first part may be true, the rest is bunk.  There are, on some weekends, over ten thousand migrants coming over one border (Hungary) alone and virtually none have an interest in remaining there.  They are all concentrating in the places where they believe the handouts (not opportunity) will be greatest.

But that is not the bad part. No, the bad part is that these are not, for the most part, refugees from a war.  The demography doesn’t match that profile; war refugees trend female, very young (children) and very old (men past the age of productive resistance to the war in their own country.)  These “refugees” are the exact polar opposite of that demographic profile; they trend male and of fighting age.

It only gets worse from there.  These are also not healthy, first-world people.  Many have communicable diseases, almost none have been immunized (against anything) and they’re all concentrating in relatively-small areas.  This has the potential to be a health disaster of unprecedented size and scope in the developed world.

If it ended there it would be bad enough, but it doesn’t and won’t.  If these people are allowed to stay they are the demographic anchors for the remainder that did not come.  Those are the women and children who will immediately migrate if the men are allowed to stay, and they will do what men and women do once together; in other words, create a population explosion.

And then the really bad news comes: Virtually none, and I do mean none, of these people have any intention of assimilating into the cultures where they “migrated” to.  They have every intention of planting their culture in those places and demographically guaranteeing its survival.

These are not stupid people, but the governments and people in these nations are stupid.  They believe these are “refugees” for the most part.  They are not.  They are an invading army that requires no guns as they’ve been invited in exactly as the Greeks were in Troy — except they don’t have to hide inside a wooden horse.

How are the people of Europe going to stop it, if they haven’t stopped it by now?  Good question — but they had better stop it, because if they don’t what is considered western civilization in Europe is about to end; first by disease and pestilence and then by revolution from inside.

Don’t kid yourself folks, and don’t kid yourself about it not coming here.  It most-certainly will; if not in the form of “refugees” than in an actually-worse form — people with college educations and no debt from third-world nations displacing hundreds of thousands of indebted American young adults!

Now here’s why: We have a bunch of politicians who understand exponents.

You may refuse to wake the **** up and do the math, but they have done so. They know that the promises they made depend on ever-forward exponential expansion of resource, especially cheap labor, but that’s impossible as the land we live on is finite in resource, size and mass.

They believe they can import votes and through handouts control it.  They think they’re in control, in short, but they are not — the people invading know damn well what they’re doing and are exploiting their stupidity.

Europe is finished within a decade if they don’t put a cork in this now, and we’re not far behind. There is a point beyond which a literal civil war will be the only way to reverse the trend and nobody in their right mind wants that to happen.  The only other alternative will be to submit to being part of a Caliphate.

What Do You Prep For: Local / Regional Trouble