The Whole Eurozone Could Be Ablaze by New Year 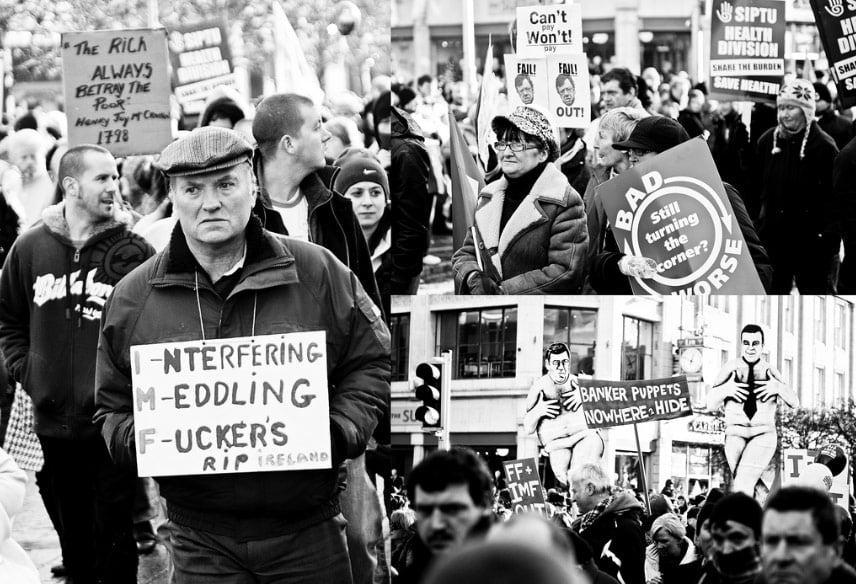 Late Sunday night the EU announced that they have agreed upon an 85 Billion Euro ($113 Billion) bailout for Ireland. Early media reports sought to calm global stock markets by suggesting that crisis talks were over and the deal was just about inked.

The problem is, however, that even though the EU wants to give Ireland a bailout, the Irish people may have none of it. Ireland’s debt crisis, though a drop in the bucket compared to that of Spain (and the USA), may be the catalyst for a complete bond meltdown in Europe if the Irish Parliament refuses to accept assistance from the IMF et. al. :

Therefore, the next week will be crucial, in Ireland. The next week could likely decide the fate of the Eurozone.

If the popular perception grows over the coming week that the Cowen government sold out the country to the IMF and the EU, then it is possibleâ€”very possibleâ€”that the austerity budget will not pass on December 7.

This would be a disaster to the European Union.

Is such an outcome likely? Will the Irish reject the austerity budget on December 7? Will they instead force the Irish banks to default on their debt?

But if the Irish reject the austerity budget on December 7, it is obvious that the Spanish problems will come to a head a lot faster.

An Irish rejection of the bailout would send the bond markets into a frenzyâ€”Spanish debt would immediately come under pressure, likely crashing before Christmas. Italy would come immediately next. The whole Eurozone could be ablaze by the New Yearâ€™s.

Therefore, the EU needs to make the December 7 budget vote go smoothâ€”they need to pull out all the stops and make the Irish understand the situation. They need to make them see the wisdom of making sacrifices for the well being of British and German banks.

We realize that the goings on in Europe are not the concern of the majority of Americans – we’ve got plenty of problems right here at home – but, consider what may happen to US stocks, bonds and our economy in general if Europe collapses.

Correction: Not if, but when.

We’ve maintained, that like the US, the coming European collapse is inevitable. Even if the Irish accept the bailout, the EU still has Italy to deal with, as well as Spain, which would require a bailout five to ten times times larger than Greece, Ireland and Portugal combined.

In early November we asked Is a Monster Reversal In Stocks, Commodities, and the US Dollar in the Works?

We will soon find out, either by the end of this year if Ireland doesn’t take the bailout, or by next Summer, at which time Spain’s problems will be the talk of mainstream financial pundits the world over.

Whatever the case, whenever Spain and Italy finally do have a meltdown in their debt markets, we can see massive capital flows shifting from Europe to the US.

This means that the Euro may be annihilated, while the US dollar benefits.

If we had to guess, further continuation of the European debt crisis will lead to falling equities, commodities and perhaps even precious metals (for a time). Depending on the severity of how the EU crisis is perceived, we may even see a sharp correction or crash in US financial markets.

This, of course, may lead to further erosion of the American consumer, as many will fear that a double dip recession has occurred (those paying attention realize that we’re way past recession and in the throes of another great depression), leading to further reinforcement of the negative feedback loop of rising unemployment, falling wages, and increased government assistance.

Keep an eye on Europe, it is a good indicator of things to come here in the US.