As most know by now, conspiracy theories often become conspiracy facts.  The United States government’s counterterrorism center has accidentally released documents about the use remote mind control on the easily manipulated masses in a FOIA request.

The Washington State Fusion Center, a government multi-agency counterterrorism center, accidentally released some documents that will puzzle and surprise many this week: A dossier on the effects of remote mind control, a media report claimed. According to RT, investigative journalism site Muckrock filed a Freedom of Information Act (FOIA) request with the center, looking for documents on Fusion’s investigations into white supremacist groups and far-left activists Antifa. Among the trove of documents that Muckrock got back was a file titled “EM effects on human body.”

This file contained an apparent explanation of the effects of electromagnetic waves on the human body. These waves, one document explained, can read and broadcast a person’s thoughts, manipulate their limbs, control their dreams, and create sensations, from agonizing all-over body pain to involuntary orgasm, the report states.

Another document explains how electromagnetic mind-control weapons can be deployed by satellite, through mobile phones, or from equipment hidden in the back of the proverbial sinister-looking black van. It really is the stuff of nightmares and totalitarian control of the entire population. 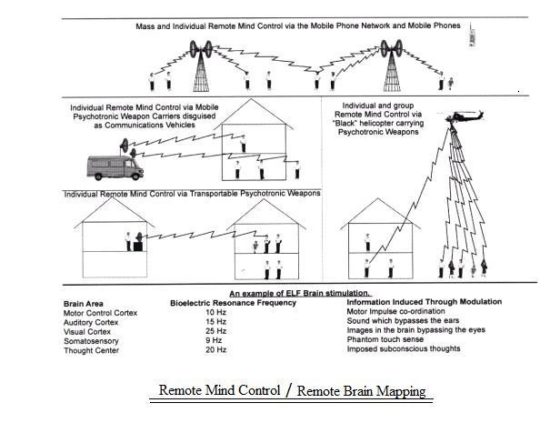 Nowhere in the file is any research by the Center on this technology mentioned, nor is the origin of the images explained. No agency logos are present on the images, and it is unclear whether they were intended for a different release or not. Likewise, they could simply have belonged to a member of staff and found their way into the FOIA release by accident.  Either way, we now have even more evidence that the US government is seeking to control our minds.  To what extent? Who really knows…

According to Popular Mechanics, some of the images are from an article in Nexus magazine, a fringe Australian publication about conspiracy theories and the paranormal. The article in question describes a lawsuit filed by a John St. Clair Agnew against the NSA in 1992. Agnew claimed that the NSA used electromagnetic technology to “assassinate US citizens covertly or run covert psychological control operations to cause subjects to be diagnosed with ill mental health.” So how did those particular files accidentally end up in a FOIA request for investigations into Antifa and white supremacy?  Files that came directly from the US government.

Of course, many of us have heard of MKULTRA, the government’s own mind control experiment. Historically, the CIA experimented with mind control as part of its MKULTRA program during the Cold War. According to Senate hearings in 1977, these horrific human experiments included the use of hallucinogenic drugs, hypnosis, and sensory deprivation.