The U.S.’s “Nuclear Coffin” Is Likely Leaking Radioactive Sludge Into The Ocean 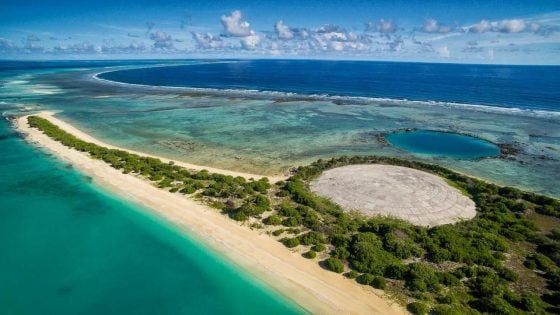 The United States’ “nuclear coffin” could be leaking radioactive sludge into the Pacific Ocean.  The coffin holds the radioactive waste from testing nuclear weapons during the Cold War and could be causing untold damage to the ecology and marine life in the sea.

According to United Nations Secretary-General Antonio Guterres, a concrete dome that was built on Runit Island in the late 1970s to contain waste from massive atomic bomb tests conducted after World War II could be leaking toxic sludge into the sea. “The Pacific was victimized in the past as we all know,” Guterres said, according to AFP as reported by Fox News. Guterres was referring to nuclear explosions carried out by the United States and France in the region.

Guterres has sounded the alarm over the giant concrete dome built 40 years ago in the Marshall Islands, specifically on Runit Island, to contain radioactive waste from Cold War-era atomic tests.  A little over a year ago, these same warnings were blared.

Between 1948 and 1958, the Enewetak Atoll was used by the U.S. government to test 30 megatons of nuclear weapons, which is the equivalent to 2,000 Hiroshima blasts. More than 8,000 people later worked hard to clean up that island, shifting 110,000 cubic yards of radioactive debris into a 30-foot-deep crater, which was later sealed in a concrete dome to prevent contamination.

Paul Griego, who took part in the cleanup and blames the radiation for a host of health problems, said the dome was never fit for the purpose of containing radioactive waste. Although the dome is 16 inches thick, and 350 feet across, Griego says it’s nothing more than a “gigantic radioactive toilet.”

“We were given an impossible task – cleaning up the radioactive fallout from 43 nuclear bombs. When I first arrived, the dome’s blast crater was open to the ocean – it continued to be full of sea water even after it was sealed off from the ocean. During my 10-hour work day, I witnessed the water level in the crater rise and lower as the tide came in and out,” says Griego. –SHTFPlan

Cracks have developed in the concrete and there are fears that it could break apart in the event of a tropical cyclone. “The United States Government has acknowledged that a major typhoon could break it apart and cause all of the radiation in it to disperse,” said Columbia University’s Michael Gerrard.

The “nuclear coffin” was seen as a temporary fix at the time the U.S. government needed to dispose of massive amounts of radioactive waste. “I’ve just been with the president of the Marshall Islands [Hilda Heine], who is very worried because there is a risk of leaking of radioactive materials that are contained in a kind of coffin in the area,” Guterres, who is touring the South Pacific to raise awareness about climate change, told AFP.

Guterres did not propose a fix but declared he’s worried about the situation.