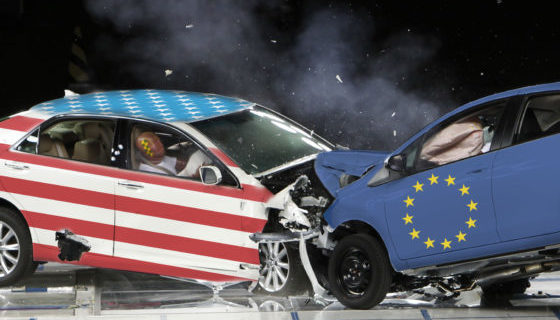 Tariffs imposed on goods by the European Union, and the Chinese and American governments on boats, cribs, bourbon, and more have put Wisconsin businesses between a rock and a hard place. The tariffs imposed are already damaging a bloated bubble economy and the hardships are just beginning.

“It’s been catastrophic,” said Rob Parmentier, who is the president and CEO of Marquis-Larson Boat Group, which builds Carver yachts in Pulaski, Wisconsin. According to USA Today, the first “hand grenade,” as Parmentier described it, tossed during the trade wars at him specifically, was a 25 percent tariff the European Union placed this year on boats built in the United States, along with scores of other products including Harley-Davidson motorcycles.

The next disaster was a 10 percent tariff slapped on boats shipped to Canada, along with price increases of up to 40 percent on a lot of boat building materials. This is causing skyrocketing prices, fewer sales, and will, in turn, result in a huge loss of jobs, something manufacturers warned about before the tariffs went into effect.

“We’ve had a lot of order cancellations. Canada and Europe have essentially stopped buying boats,” Parmentier said according to USA Today. “We’ve been absorbing some of the additional costs … hoping the tariffs will go away. But we can only do that for so long,” he said. The next step is layoffs.

And the tariffs aren’t going to only affect boats.  Ford Motor Company has already announced a loss of $1 billion thanks to the tariffs and says layoffs are all but imminent. Ford has announced that the company will lay off workers to cover the cost. The exact number of layoffs is not yet known, however, a recent report by Morgan Stanley estimates “a global headcount reduction of approximately 12 percent,” or 24,000 of Ford’s 202,000 workers worldwide. “Such a magnitude of reduction is not without precedent in the auto industry,” analysts wrote in the investment note. And if you believe this will only affect those workers in the industries hit hardest by the tariffs, think again. The cost of a car will go up about $7,000 because of companies being forced to comply with the trade war regulations and tariffs.

Stores such as The Dollar Tree have already felt the impact of the tariffs, and they are passing costs onto their customers. And those customers are particularly susceptible to higher costs, as most shoppers are lower or middle-income families. Customers are likely to see slightly less merchandise in stores, smaller packages at the same price for certain items and perhaps some higher prices at Family Dollar, said the company’s chief executive, Gary Philbin.

Businesses are running out of ways to cut costs and that will result in the loss of jobs.