The Swine Of The Mainstream Media Are Terrified: We Finally Have A President Who Acts On Behalf of The U.S. 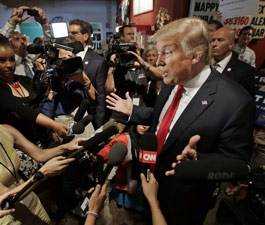 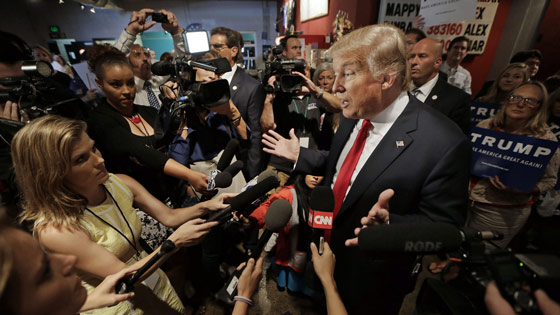 Just look at President Trump go!  Yes!  Enjoy it!  This is the type of thing that all Americans who want to restore the United States to a free nation want to see!  The TPP (Trans Pacific Partnership) is not going down the drain: The President is flushing it down the toilet, where it belongs.  Hopefully the toilet paper he used is the New York Times, which published an article covering the death of (as they quoted it) “Obama’s signature trade agreement.”  Here’s an excerpt of that AP article:

“WASHINGTON — President Trump upended America’s traditional, bipartisan trade policy on Monday as he formally abandoned the ambitious, 12-nation Trans-Pacific Partnership brokered by his predecessor and declared an end to the era of multinational trade agreements that defined global economics for decades.

With the stroke of a pen on his first full weekday in office, Mr. Trump signaled that he plans to follow through on promises to take a more aggressive stance against foreign competitors as part of his “America First” approach. In doing so, he demonstrated that he would not follow old rules, effectively discarding longstanding Republican orthodoxy that expanding global trade was good for the world and America — and that the United States should help write the rules of international commerce.

Although the Trans-Pacific Partnership had not been approved by Congress, Mr. Trump’s decision to withdraw not only doomed former President Barack Obama’s signature trade achievement, but also carried broad geopolitical implications in a fast-growing region. The deal, which was to link a dozen nations from Canada and Chile to Australia and Japan in a complex web of trade rules, was sold as a way to permanently tie the United States to East Asia and create an economic bulwark against a rising China.  Instead, Mr. Trump said American workers would be protected against competition from low-wage countries like Vietnam and Malaysia, also parties to the deal.”

There are quite a few items to take note of in the piece.  First, distortion of the facts, as with this example: “…and declared an end to the era of multinational trade agreements that defined global economics for decades.”

That sentence may not seem as if it’s important, but it is, because the use of the word “decades” ties Republican and Democratic administrations into the “soup” of the paradigm: multinational agreements.  It is true in part.  What it leaves out is that the world economies are all currently faltering, but this is part of a broader plan to bankrupt and destroy individual sovereign nations and in the process of doing so, foster dependency upon one another in the mindset of the collective.

By gutting economies, fostering geopolitical upheavals, the changing of boundaries, and the allowance of oligarchs to become inexorably intertwined with “governments” (hence becoming governments in a de facto manner), the “multinational trade agreements” have bypassed laws of individual nations.  The IMF, the World Bank, and the UN have been the brokers, bankers, and (kangaroo) enforcers, respectively, to draw these nations into the global net.

There is more, as with this phrase: “…he [President Trump] demonstrated that he would not follow old rules, effectively discarding longstanding Republican orthodoxy that expanding global trade was good for the world and America…”

Follow the “old rules,” eh?  Such as those slipped under the crack of the front door by the Federal Reserve, the Council of Foreign Relations, and the Bilderbergers that made any compliance with them neither Democrat or Republican…but Globalist.  Longstanding Republican orthodoxy being translated into rigidity and procedure foisted upon the people with the objective of enabling complacency (by the Republicans), and hence the further realization of the planned shift to global governance.

The Democrats see themselves either as revolutionaries or as “socially-conscious” individuals working towards the “betterment” of mankind (i.e. – Marxists).  That “Republican orthodoxy” being a way to polarize the masses into the illusion of one camp or the other, while the alleged Republicans put up a weak/faux resistance and speed along the transition to globalism either directly or indirectly.

The slant and bias is evidenced by this phrase within the article: “…Trump’s decision to withdraw…doomed…former President Barack Obama’s signature trade agreement…”

Not President Trump, mind you…. they made him one of the “average Joe’s” while glowingly giving Obama the lofty title…and showing you, mind you…how we, the American people…are losing a signature trade agreement.  As if it’s a piece of Godiva chocolate being lost, and not offal flushed into the sewers: its true identity.

Nothing of what it is: The President removing a heinous piece of strangling paperwork, a treaty that attempted to circumvent Constitutional procedure and ratification to entangle the US in a GDP and border-destroying relationship that places us on a par with countries such as Malaysia and Vietnam.  With Vietnam?  Really?

By flushing this piece of garbage, the President has already taken a step toward affirming a position not of isolationism, but of sovereign national strength.  The Times unwittingly (or “witlessly” perhaps the better term) allowed this last part to slip through that gives the clear intent of the President’s actions: “…Mr. Trump said American workers would be protected against competition from low-wage countries like Vietnam and Malaysia, also parties to the deal.”

Boy, they love using “Mr.” instead of “President,” don’t they?

The key to keep in mind here is this is almost a Freudian slip on their part, because it gives the true reason for scrapping the TPP…in the interests of American workers.  It still manages to skew even within the sentence… “low wage countries like Vietnam…”  Low wage?  No.  Slave wages: the slave labor of communism is the actual “economy” of Vietnam.  It also attempts to keep the Democrats focused on the evils of the President, in this targeting for their “porridge” minds: “Oh, he’s destroying a deal that would benefit the poor, low-wage, non-Caucasian workers of Malaysia and Vietnam!”

Those swine of the Mainstream Media can’t detract from the actions that the President is taking, and inwardly they’re terrified.  They are petrified of the hiring freezes on the federal government, terrified of the go-ahead orders with the border fence, and “mortified” by the decision to open those keystone pipeline areas, creating jobs and boosting the economy.  Petrified of a President of America, vs. Thomas More’s “Utopia.”  The President is off to a great start.  It’s going to take quite a while to clean up this mess, but he has the right idea: to institute change without conforming to the existing (and expected) “Republican orthodoxy” paradigm.

The paradigm shift is occurring, and the President is the impetus.  After almost a decade of diseased Marxism and community agitation raised to the level of the highest elected office of the land, we now have an actual President of the United States, a representative of the American people.  Kudos so far, and the praise is deserved.  We the people need to monitor his progress and not let up with either our vigilance or our voice.  It is on us, too, and there’s a long road ahead of us to reversing the course inflicted upon us.  But it’s good to finally have an American President: one who acts on behalf of the United States and the people.