Let me start by reiterating something – all of this has to be kept in context.Â  I know Scottsdale is not in dire straights (yet) like some other areas of the country (e.g., Detroit…with a real unemployment supposedly approaching 50%).Â  However, as I said last time, my family has lived here since the early 80s…and this is some stuff that I’ve never seen.

Anyway, a couple of weeks ago I was running some errands and decided to take a drive around a couple of areas to see if I could get a better idea of the state of commercial real estate around here.

I knew it was going to be pretty bad…but I think I found it to be considerably worse than I was expecting.Â  Note that all of these photographs were taken within five miles of my house and/or the shopping center that was the subject of my previous post on this subject.

This first complex is mostly office space.Â  However, I think the first floor can be used for retailers. It’s just up the street from my house and definitely in a Snottsdale area. (Well, I guess that means I am a Snottsdalean).Â  It was completed probably around this time last year.

First, take a look at both photos so you can get an idea of the size of this place. 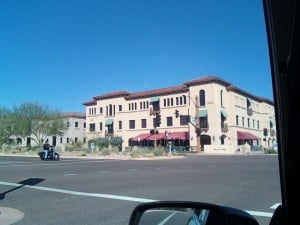 Here is the front of the complex. 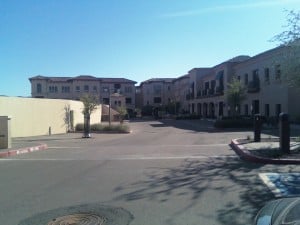 This is the back.

Well, in the first photograph, on the corner, you will see a spot with the red canopies.Â  That is a little Italian restaurant/bar.

That little Italian restaurant/bar IS the ONLY tenant in the entire place…and I mean that literally. From what I could see, every other section of the complex is empty.Â  I even checked the website of the complex, and that restaurant is the only business mentioned. Well, I guess there is probably a spot designated for the complex manager – must be an easy job.

Next, there is this retail/office center about a mile north of my house. It’s been open for less than a year, I think.Â  So, yep – it’s basically brand new. I believe the idea behind the retail section (the first photo) is that it’s supposed to a “housing design” kind of thing (talk about bad timing) with maybe a cabinet dealer, a flooring dealer, an appliance dealer, etc. – all in the same complex. The other two buildings appear to be pretty standard office space.Â  Yes, there are two seperate office buildings – they look identical.

In the first photo, if you look carefully, you will see a black SUV on the other end of the complex.

That spot in holds the one tenant.Â  (By the way, it is related to housing design – ironic.) 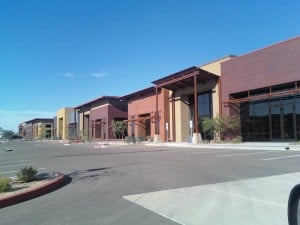 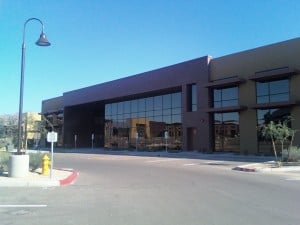 The first office building. You can see the reflection of the retail section in the windows. 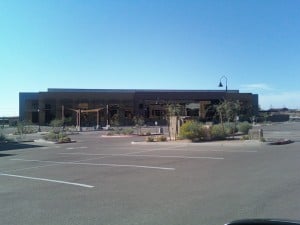 The second office building. Finding a parking spot was not a problem.

I have been able to confirm that at least one the office buildings is completely empty.Â  I am not sure about the other…though neither looked active to me at all.

The rest of the photographs were taken in the area referred to as “Scottsdale Airpark.” It’s a relatively large (for this area) commercial real estate area that surrounds Scottsdale Aiport, which is a basically a fairly large municipal airport. In my opinion, this is really the center of Scottsdale these days.

These first two photos are of a large (c. football field size), warehouse-like building (but I think individual units can be built out). It was completed some time ago – maybe two years. 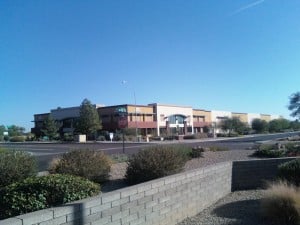 Itâ€™s a big building. I had to park kitty corner from it to get a good shot of the whole thing. 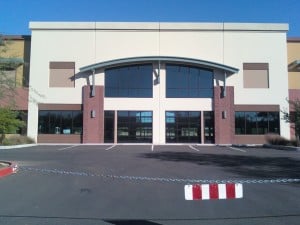 I drive by this place quite a bit.Â  It has been COMPLETELY EMPTY since it was completed. Period. Heck, it’s so empty that they have the parking lot chained off (see the second photo).

As you can see, it looks like a nice, new building…as do all the other ones I’ve shown you.

Now, this next area just gave me the creeps. 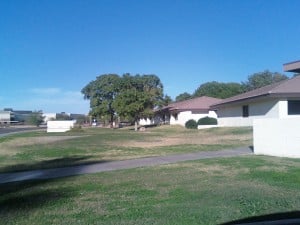 Maybe this was used for medical offices at one pointâ€¦ 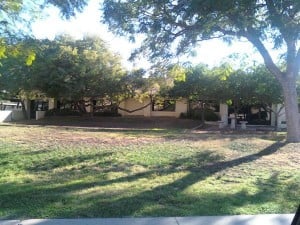 From the other side of the complex. 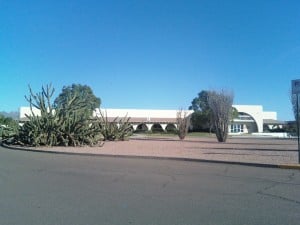 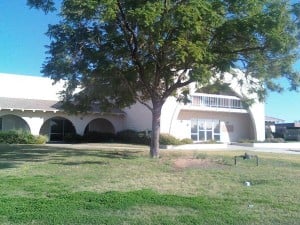 This is on the other, older side of the Airpark.Â  The complex in the first two photos looks like maybe it was used for medical offices or something at some point, and I have no idea what the second building was used for.Â  Either way, this area felt like a ghost town.

Granted, these are older office buildings, and I don’t know how long they’ve been empty (and they appear to be as empty as possible) or what their “legal” status is.Â  That being said, driving around here made me feel like The Omega Man.

These things just look flat out dilapidated, at least relative to the rest of Scottsdale. I’m sure if someone bought them (or squatted them for adverse possession), they could be cleaned up and be perfectly fine.

However, the state of this section, along with that of the other places I have shown you, is something I have NEVER, EVER seen in North Scottsdale before.

For the time being, if I chose to film an independent, low-budget SHTF movie of some sort (probably a zombie attack), I’m going to film at least one scene at each of those last two places.

Once again, this is all relative and needs to be kept in context, but as far as my memory serves me, we are in uncharted territory.Â  It should also be noted that I took these photos while driving around for less than an hour…and had I stopped at every single place that obviously had a substantial portion that was vacant, this post would probably have hundreds of photos…literally.Â  This is just a small taste of the state of commercial real estate in this area.

…but wait!Â  I do have some good news.

I was able to pin point one business that appears to be doing well in this area: 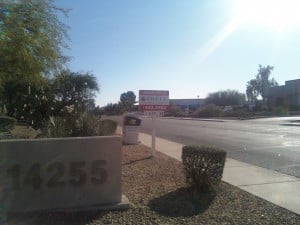 There are signs like this ALL OVER the Airpark. And for those who haven’t figured it out yet, they are used to indicate where space is available for rent and/or sale. Someone has to be making a killing on these things right now. Although I did not actually count them, I would that at least 50% of the buildings in the Airpark have signs like this out front…and that is probably being conservative.

But hey, someone is selling the signs! Chalk that up as a green shoot!