The Reality Of A Massive Market Crash: “I Have Lost Everything… I Don’t Know What To Do… I Trusted the Government Too Much…” 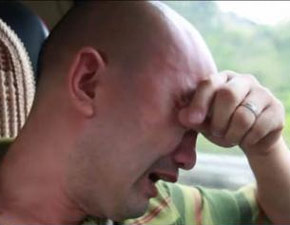 In April of this year, as Chinese stock markets rocketed to new all-time highs and the country’s speculators joined online brokerage firms by the millions, we learned that everyone, from farmers to banana stand workers, was joining the fray. It was different this time, of course, because infinite growth was guaranteed by the government, so there was no risk, only profit.

It was then that we shared the following picture of the modern-day shoeshine boy, noting at the time that it was the only thing you needed to see to know it was time to get out of stocks: 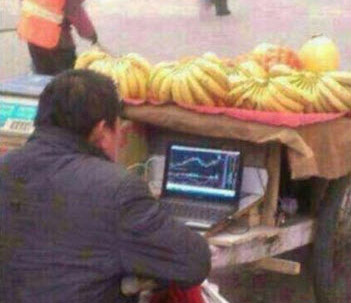 Markets continued to rise over the following weeks and warnings from alternative financial media analysts went unheeded. In fact, so convinced were the Chinese that the stock market was the new road to riches that over 10 million people opened trading accounts in the first half of 2015.

But their rags-to-riches success stories were not to be.

Within three months we have seen the reality behind the meteoric rise in global equities as prices collapse under the weight of heavy leverage and insane speculation.

And the reality is stark. What’s worse, it will soon make its way to Western exchanges where millions of investors, pensioners and average Americans will witness what millions in China are living through today.

It won’t be pretty:

What a difference a month makes: back in June, Chinese farmers could barely wait long enough to open one (or more) brokerage accounts and leave the pig herd for good, filled with dreams of getting filthy rich and early retirement happy endings; farmers who said on the record that “it’s a lot easier to make money from stocks than farmwork.”

Alas, like with every rigged market (which in the New Normal is every market), dreams always turn into nightmares for the participants, and as we documented earlier, the same farmers who were giddy with delight a month ago realized that there is no such thing as a guaranteed “get rich quick” scheme, and the full extent of their naive stupidity:

“I have lost everything. I don’t know what to do… I trusted the government too much…” he exclaims, adding “I won’t touch stocks again, I have ruined everyone in my family.” 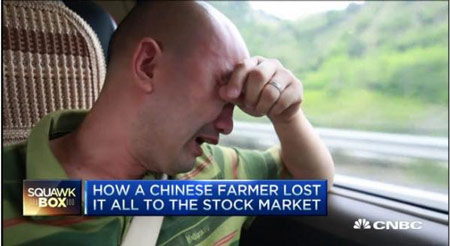 Even sadder, like the Greeks, these poor (and now even poorer) representative of China’s lower/middle class only have themselves to blame. Call it Natural Selection with a margin call…

However, not everyone was stupid enough to gamble (with 5x leverage), and get wiped out. Some are stuck in stock market purgatory, or as Reuters puts it “trapped in the market” and now they are hoping, praying and “plotting their escape with government money.”

Some, like Mrs Zhu who is the “type of investor the Chinese government should worry about as it tries to engineer a turnaround in the country’s stock markets, whose massive swings have heightened fears for the country’s financial health.” Mrs. Zhu is one of millions of retail investors who bought at what they thought was a low price with hope of selling to a greater fool higher, however the greater fools ran out and sho is now “trapped by the market crash in June who prefer to hold losing positions rather than take a loss” – in short, Zhu is just waiting for indexes to rise so she can sell.

She could be waiting for a long time. In the meantime, this is how millions of hopeful underwater investors pray their purgatory ends:

“I will sell all my shares tomorrow if there is a chance,” said the government clerk, who almost hit the sell button last week after markets had recovered somewhat from June’s slump. But because she was still set to take a loss, she held on.

“I am pretty sure that if the government does not come to rescue us, the situation will get much worse,” she said.

The Chinese, like the rest of the world, are headed into depression. What’s coming cannot be stopped, as evidenced by the continued degradation of China’s stock market despite over a trillion dollars of emergency liquidity and bans on the selling of stocks.

The economic “growth” numbers around the world are being revealed as the conjecture they really are.

With numerous analysts and insiders forecasting a serious financial calamity over the course of the next six months, we can fully expect similar confusion from Americans who were told by their government that they need to keep spending, keep borrowing, and keep investing.

The pain is coming and those who were vilified for preparing stockpiles rather than buying stocks will soon be praised for their foresight and fortitude in the face of a concerted effort to marginalize their warnings.

As for what to do to prepare for serious crisis, well known economic forecaster Martin Armstrong says you should have at least three months of cash on hand for basic expenses because no financial institution is safe.

And if Greece is a guide, then we can also expect serious problems with the global supply chain as credit-dependent commerce systems are disrupted. That means food, medicine, toilet paper and other necessities become impossible to find at nearly any price.

And when people finally realize that they’ve been lied to by their government and no help is coming they’ll very quickly descend into panic mode, as noted by The Prepper’s Blueprint author Tess Pennington:

3-5 days following a disaster is the bewitching hour. During this short amount of time the population slowly becomes a powder keg full of angry, desperate citizens. A good example is the chaos that ensued in New Orleans following the absence of action from the local government or a timely effective federal response in the aftermath of Hurricane Katrina. In such troubled times, people were forced to fend for themselves and their families, by any means necessary. This timeline of Hurricane Katrina effectively illustrates “the breakdown,” and within three days, the citizens of New Orleans descended into anarchy, looting and murder.

New Orleans was just a warm-up compared to what could happen in an emergency on a national scale wherein the government will be overwhelmed and under-prepared to handle the needs of millions of people.

The Step-By-Step Guide To Help You Through Any Disaster