The One True Thing 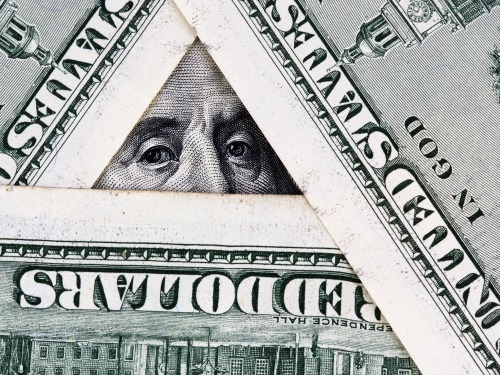 This article was originally published by Chris Martenson at Peak Prosperity

Until you see clearly how the rules of society work, you will be trapped within a system of control.

What you mistake for reality is instead a fabricated simulation, designed to keep you trapped right where the system wants you.

Your social conditioning, education, and family structures program you with a set of beliefs, values and norms — often unexamined — that “properly” align you in such a way that you focus your life and labor on keeping the existing social hierarchy in place and that you never deeply question this arrangement.

Put visually, your culture is in the shape of a pyramid. And what keeps you pinned to your particular layer is your belief system.

Every civilization has its own defining narratives that, while beautifully diverse, all generate exactly the same structure: a pyramid consisting of many more people at the bottom than at the top.

Every civilization throughout history had One True Thing that determined each person’s position on that pyramid.

In some past eras, it was royal bloodline. In ancient Egyptian culture, it stemmed from being a direct descendant of the Sun god Ra. And today, it’s a function of how much money you have.

No matter the marker, the pecking order is held in place because everyone accepts the rules. They’re fully understood by the citizenry, and are only rarely questioned (usually at great personal risk).

But even though accepted as “100% true” by the participants of one culture, social markers often don’t translate when applied to another.

For instance, if you traveled back in time to the height of the Aztec empire with $1 billion in cash, your paper bills wouldn’t have any accepted value. You’d probably have trouble acquiring even a single tortilla with them.

Your modern currency just wouldn’t be money to that ancient culture.

Similarly, the highest of the high priests of the Mayan culture, decked out in their amazing plumage headdresses would be granted neither power nor awe by today’s society. At best, they’d be valued as a curiosity; perhaps as entertainment in a traveling circus or Las Vegas show.

Trapped In The Matrix

Throughout all of civilized history, the ‘One True Thing’ absolutely ruled our way of life. There has been no escaping it. Your position on the societal pyramid has been absolutely determined by your relationship to the prevailing social marker.

Due to ignorance and/or fear, the vast majority of people in every civilization never question their culture’s prevailing ‘One True Thing’. Instead, they live their lives as good, dutiful, compliant citizens. Largely because “that’s just the way it is”.

Further, because each layer of the pyramid is afraid of the masses sitting beneath it, its residents actually defend the system quite vigorously. Each layer of middle management in this architected hierarchy works hard to keep things as they are, lest they lose their advantage over those below them.

This is why the police are busy clubbing, gassing and rubber bulleting Yellow Vest demonstrators across France. This is just one layer of management trying to keep the other (lower) layers from upsetting the whole pyramid.

This is just protecting their own self-interest. I seriously doubt if many of the police involved truly care about protecting the people who socially outrank them. They probably despise those elites just as much as the Yellow vests do.

But the cops are committed to vigorously beating the Yellow Vests because doing so justifies their existence within the cultural pyramid. To do otherwise would be to more closely examine their own lives — and how unfulfilled, sometimes miserable and unprofitable they really are. That’s an existential trip most are unwilling to take.

They figure it’s best to just break out the clubs and get busy defending … something.

Self-Education Is The Path To Freedom From The Matrix

The ‘One True Thing’ that our current culture is fixated upon, just as surely as any prior civilization has ever been sure of its own explanation for the few being supported by the many, is money.

If you have it, you can literally live like the gods of old. Every comfort is available to you, every freedom, the ability to go anywhere and do anything — without consequence.

It’s that powerful of an idea.

It doesn’t mean that people with more money are necessarily better than anybody else. But culturally, we willingly act as if that’s the case.

Now, given the importance of money in society, let me ask you a question; “How much were you taught about money in school?”

Were you taught how it is created by banks during the act of making a loan? Or, that the Fed can simply create it into existence at will?

Were you taught the tax code? All those rules and wrinkles that can benefit you enormously if you know of them?

Were you taught which careers, investments, and strategies created the most wealth? Or which ones are tax-protected? Or which ones will condemn you to a life as a wage slave and tax donkey?

Did you have an amazing teacher that taught you about managing your personal income and balance sheets?

Me neither. None of that was imparted to me during my time in the education system (and I have an MBA and a PhD).

That information, while easy to learn and understand, is strictly withheld from public education for one reason and one reason only: it’s the language of the protected classes. The rich have access to that information; the masses don’t.

If you want to move up and out of your economic layer, you have to learn that language. You have to self-educate.

Luckily this information isn’t hidden or forbidden. But you have to seek it out yourself. You won’t find it in mainstream resources — and certainly not in the news, especially the financial press.

In Part 2: The Path Forward we lay out a process for self-educating your way out of the prison of the social pyramid. These include our learnings as well as those imparted to us by the extremely successful entrepreneurs we’ve spend the past week with at a secluded investor summit outside of the US.

It’s amazing how many of these investors who have reached true financial freedom, where their passive cash flow from investments exceeds their living expenses, attribute their success to “unlearning” what they were taught in school. And then learning the rules to beat the wealthy at their own game.