The Next Crash Could Be The Big One: “Don’t Be A Refugee In Your Own Country” 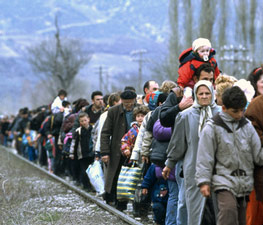 Though our political leaders maintain that the contagion from Europe and China won’t spread to the United States, our economy is likewise an utter catastrophe. In his latest interview with the Financial Survival Network hard asset investor Daniel Ameduri suggests that given what we know about the coming destruction to financial markets set to take place over the next six months, “maybe the conspiracy guys aren’t completely nuts after all.” When those markets finally collapse, he warns, America could look like the aftermath of Hurricane Katrina, but on a massive scale as our currency loses purchasing power, credit markets lock up, and the regular flow of commerce is disrupted.

With that in mind Ameduri issues an important warning – prepare accordingly and don’t become a refugee in your own country:

For Americans, when it comes close to home, unfortunately it may be a very sad event… like the event that happened after Hurricane Katrina when you had so many refugees… It’s a big thing… Don’t be a refugee… especially in your own country.

Even though crisis is on the horizon, many people either don’t realize it, or they simply ignore the warnings and fail to position themselves properly. The end result of such apathy to events happening around us can be seen in Greece, where people waited until the last minute. But by then it was too late as store shelves ran out of food and banks ran out of money.

For Americans who are watching this, the Greek people have been in crisis for years and years and it’s been very public. The United States has also been in crisis but it’s not as public. It’s more of an undertone.

You see it in the food stamps, you see it in under-employment… in the dramatic rise of college graduates working in bartending and waiter and waitress jobs… So it’s there. The crisis is there, just like Greece has the crisis.

Even though they have been in this crisis for five years it took the crisis boiling over just in the past few weeks to see empty store shelves and lines at the ATM’s.

And though the average American may not be heeding the warnings, it is clear that those in the know are:

For Americans, we’ve had the ultimate privilege for the last fifty years with the world’s reserve currency and super power status.

…Things are shifting with the new alternative IMF type bank that the BRIC nations have created, and the physical gold bullion that China and Russia are buying, and the changes we’re seeing in currency transactions not denominated in U.S. dollars.

…Major powers out there are planning for how they’re going to proceed post U.S. dollar dominance.

…The next market crash… the next financial crisis could be the big one because there’s really no ammo left… the ammo has been fired… trillions and trillions… we’re paper thin away from the whole thing just cracking.

Crisis is coming. In fact, we’re likely in the midst of it now, but it remains an undertone as politicians and their mainstream media mouthpieces continue the cover-up.

But that doesn’t mean you have to sit back and be impoverished during the next leg down. Though Ameduri warns of serious problems in the near future, he is ever the optimist. As he explains, there were more millionaires created during The Great Depression than there were during the gilded age of the Roaring 20’s. Crisis breeds opportunity for those willing to take advantage of it.

In addition to preparing for disruptions to our commerce and supply systems, Ameduri recommends a number of strategies including hard asset investments, partnerships with successful individuals, and turning your passions into businesses.

You can ignore the warnings and become a refugee without a home or a way to earn a living when financial disaster strikes, or you can take steps to prepare for it today.

The choice is fairly simple.