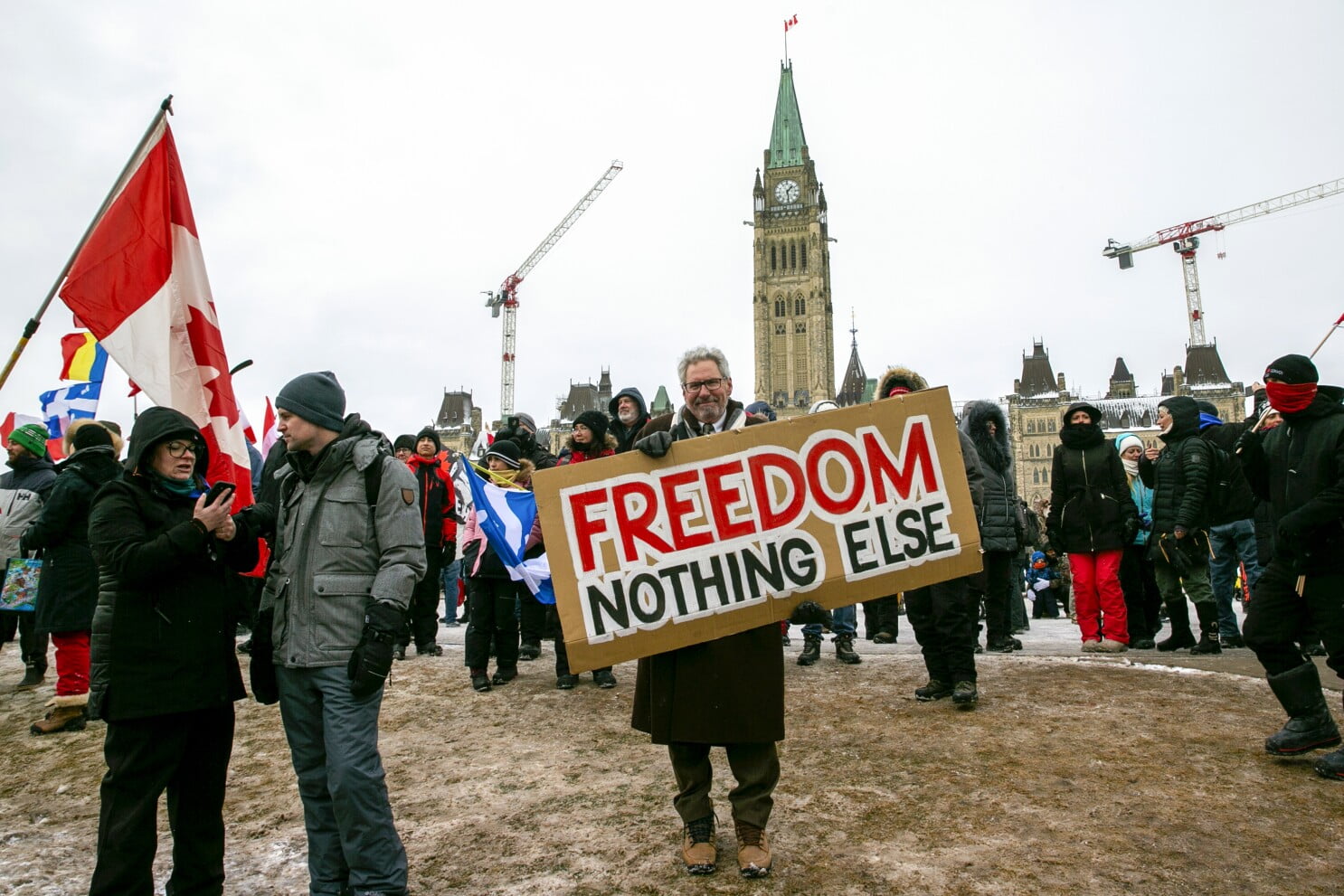 This article was originally published by Craig Duddy at The Mises Institute. 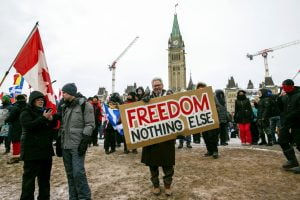 With its recent crackdown on protesting truck drivers, Canada’s government has shown that it is an enemy of liberty, and there is little hope under the current government that we shall ever see a return of any of the libertarian principles that once characterized Canadian life. Besides using guns and brute force, the Trudeau regime also has weaponized banking.

Trudeau has recently put into action the Emergencies Act of 1988 in response to truckers’ protests for their basic liberties. Canada had required truck drivers to be vaccinated to cross the US-Canada border or be forced into quarantine upon return. Rightfully demanding their most basic civil liberties, these drivers used their right to protest against the government, choosing to do so at the Ambassador Bridge, but after a week-long stalemate, the protesters were cleared.

The Emergencies Act, which really is another name for martial law, requires a “national emergency” to justify its use but determining what qualifies as such is another issue. Because governments that grab power without limits have no intention of giving back what they have taken, we can be assured Canada is no different.

When he invoked the Emergencies Act, Justin Trudeau claimed that the situation at the Ambassador Bridge qualified for these conditions, allegedly endangering the lives or national security of the Canadian citizens to where it

“[s]eriously threatens the ability of the Government of Canada to preserve the sovereignty, security and territorial integrity of Canada,” and “cannot be effectively dealt with under any other law of Canada.”

The law allegedly has boundaries but clearly is broad enough to apply to whatever the political elites believe to be an “emergency.” However, the truckers did not “seriously threaten” the sovereignty of Canada, nor did government response to the protests require the use of martial law that makes use of tyrannical powers. By invoking these laws and engaging in heavy-handed measures, Trudeau has invited future protests against his regime that likely will force his hand again.

Although these emergency powers are supposed to last only for a matter of weeks, we are reminded of the influential Milton Friedman’s quote: “Nothing is so permanent as a temporary government program.”

The Emergencies Act grants the Canadian government the power to ban travel to or from specific areas, order evacuations, require individuals or companies to lend services that the government requires, freeze bank accounts without court orders, suspend car insurance, and other powers that easily can be used tyrannically. The Canadian Civil Liberties Association too has denounced these actions of the Canadian government, claiming that the protesters did not pose a serious threat to the nation’s sovereignty and that therefore the antidemocratic Emergencies Act should not have been used.

This is only from a legal point of view, however. From a strategic point of view, the retaliation against the protesters may incite even more resistance against the government. If we are to judge a policy’s effectiveness in a “value-free” manner, we must merely suggest that this certain policy will not serve the desired ends of the Canadian government. It does not pass as a good policy even on its own judgments.

Not only does the Emergencies Act clash with basic civil liberties, such as the freedom of public assembly and the right to protest, but it also clearly violates the freedom of privacy that citizens of modern nations have enjoyed for many years. Trudeau’s bill calls for private banks to freely freeze the accounts of anyone connected to the protests at Ambassador Bridge, and depositors do not have the leverage to sue banks for such actions. James Stannus writes in The Spectator:

Trudeau’s government immediately declared that banks are allowed to freeze personal and business accounts on the mere suspicion of involvement with the protest, without obtaining a court order. They cannot be sued for such actions. Police, intelligence agencies and banks are authorised to share “relevant” information. Banks are now required to report financial relationships of persons involved in the protests to the Canadian Security Intelligence Service.

Thus, freedom of information and privacy in Canada has been wiped out by government edict. The mere suggestion of this bill at the highest level of political authority is outrageous in a nation supposedly founded on fundamental Enlightenment values. But there is more to this seemingly puzzling move by the Canadians. Trudeau clearly has a weak legal case, and his strategy should be exposed for what it is: an incitement to further centralized power. By framing a simple resistance as a violent and reactionary movement, authorities can claim that they require “extraordinary” and supreme powers of political authority.

One example of this kind of scenario is the Shays’s Rebellion in the United States during the 1780s. During the American Revolutionary War, high levels of debt were incurred in order to fund the war effort, and this particularly crippled Massachusetts, which had lost its main source of commerce, the West Indies, and saw its wartime debt rise from £100,000 to £1.5 million. Due to the high taxes and harsh penalties leveraged on the Massachusetts people, they rebelled in an effort against the courthouses. However, in the end, the effort failed, many of their demands were not met, and the nationalists of the time used the rebellion as a justification for exacerbating national power.

Unlike the Shaysites, the truckers in Canada are a hard case to make for a violent protest. The craftsmen of the elite certainly tried; however, the truckers in reality merely provided a peaceful blockade to trade. It was not in any sense violent. The violence, in fact, came from the authorities, who were recently caught running over a protester with a horse. The truckers, on the other hand, were not violent and were engaging in peaceful civil disobedience. This is the supposed “security threat.” The Spectator writes:

This civil disobedience is all Trudeau can cite in justification of the Emergencies Act. The rationale is that ongoing protest and peaceful civil disobedience constitute a threat to national security and to the economy. Yet a credible government would have avoided this situation entirely by addressing, or at least expressing a willingness to evaluate, the suffering it is inflicting on its own people.

This expansion of power is vehemently antidemocratic. The Canadian government is going against the wishes of its constituents by upholding the autocratic covid measures. According to a poll conducted by Maru Public Opinion for Postmedia, 64 percent of Canadians believe the mandates should be ended. Trudeau holds himself to be committed to progressivism, a governing ideology that more and more seems to be backward and irrational.

The Canadian government’s actions to freeze bank accounts without liability and without court orders might well lead to massive bank runs. Where depositors can withdraw funds, they will seize the opportunity. Banks such as Scotiabank, RBC, BMO and the TD Canada Trust have seen massive surges in withdrawals since the conflict began. On February 16, Google searches for the keywords “bank run” in Canada also spiked.

Another approach, however, which as of now remains a lingering political threat but still, a theoretical approach is what economists have called “the war on cash.” The war on cash is an increasing pressure by governments and central banks to eliminate transactions in cash, whether that be debt, retail, or other transactions. If economic actors cannot use physical cash in transactions, there exists a new variety of tools for state power and monetary policy. When laws such as the Emergencies Act are imposed, people will not have the choice to withdraw their funds; they must use bank accounts in order to transact and clear balances. They must accept their accounts being frozen and cannot react the way they have in these circumstances. The war on cash allows governments and central banks to further control the “animal spirits” of economic actors and use a new interest rate policy on deposits. This was attempted during the pandemic in Europe, where interest rates on deposits reached under the lower bound at –0.5 percent.

This conflict should not be treated as over, as it is still ongoing in Parliament and banks are still dealing with its effects. On February 18, the Canadian Parliament was intended to debate the proposal of the Emergencies Act; however, parliament was suspended, as police created a “no-go” zone.

However, there is hope. Trudeau faces fierce opposition in the Canadian Parliament, the Conservative opposition has vowed to stand against the Trudeau government, and out of the ten provinces, seven have declared their opposition to the Emergencies Act. We must remember the lessons of the past; the ghost of moderation looms large. We must oppose such tyrannical actions unequivocally; there is no “middle ground” that is sufficient to appease both sides. Only with full analytic vigor and radicalism can liberty prevail, and this lesson the Canadian conservatives must remember. Numerous candidates have already announced their standing on social media, Tracy Gray and Frank Caputo have both vowed to oppose the Emergencies Act; on the other hand, Mel Arnold disappointedly is striving for the middle, supporting “A reasonable approach to help lower the temperature across Canada by providing Canadians a specific plan and timeline for ending federal mandates and restrictions.”

The mandates must be ended, and the tyrannical government in Canada must be ousted by the opposition. The only way this can be done is by embracing the full analytical vigor, and unwavering radicalism of the past leaders of the liberty movement, such as Patrick Henry, Lord Randolph, and Murray Rothbard.