The Grand Finale: “World War III Will Be A Fight Over Basic Human Needs – Food and Other Commodities” 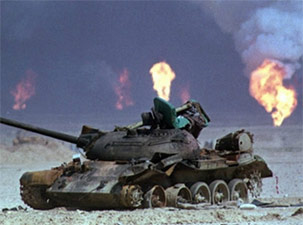 As political tensions heat up it is becoming clear that the world’s super powers are vying for control of resources like oil, water, metals and food. And though developed nations have thus far avoided any significant clashes with each other, the proxy wars being waged in the middle east and Europe are a slow burning fuse that will soon lead to widespread military confrontation.

Throughout human history one key factor has been behind every major war: a battle for resources. As the following documentary from Future Money Trends warns, this time will be no different:

“The Pentagon told Fortune Magazine that World War III will be a fight over basic human needs – food and other commodities.”

Natural resource wars are brewing and becoming an increasing threat, and may be the grand finale to an already intensified currency war among the world’s top economies.

Most wars in human history are a fight over natural resources.

… Credit is ever expanding, but the resources we pull out of the ground are finite.

The culmination of economic, financial and monetary crisis will be a grand finale unlikely any seen in the history of the world. War is coming. The time to prepare is now.

Click here to protect yourself with hard assets now.