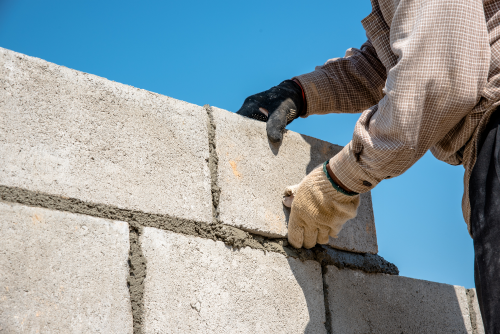 When most people consider how many migrants have entered Europe in recent years, they probably assume that the whole continent is a beacon of tolerance and love for foreigners who are seeking a better way of life. But a more accurate picture of Europe would suggest that the only thing most Europeans are tolerant of, is their corrupt governments who aren’t willing to close the borders. That tolerance is quickly wearing thin however, as most Westerners reject the migrants, who are burdening the social fabric of their communities.

Which would explain a recent incident in the French town of Séméac, where the government recently bought a hotel in the hopes of turning it into a migrant shelter.

Protesters in a town in southwest France have built a nearly-two-metre-high wall around the entrance to a disused hotel to try to prevent it being turned into a migrant shelter.

Working under cover of darkness, a few dozen residents of Semeac in the Pyrenees mountains erected a wall 18 metres (60 feet) long and 1.8 metres high barring access to the Formule 1 hotel, a spokesman for the group confirmed.

“We not against taking in migrants,” Laurent Teixeira told AFP. “But you have to take account of the citizens.”

The locals are frustrated with the government for not being transparent with the public, and not really having a plan for the migrants. The French government is currently under pressure to establish as many shelters as they can, in anticipation of another spike in migration later this summer.

Teixeira accused the authorities of failing to consult residents about the project to turn the former budget hotel into a shelter for up to 85 migrants.

“Nothing is planned for the migrants’ daily life,” he said, arguing that schools and other public services in the town of 5,000 people would be unable to cope with the newcomers.

Protester Hugo Lacoue, a tobacconist, said he was opposed to migrants being hosted in a suburban neighbourhood.

But it’s safe to say that those aren’t the only reasons why these French villagers are concerned about the migrant shelter. The politically correct media in that country probably wouldn’t publish the fears that are really on the minds of these people.

Like the fact that rapes and other violent crimes are skyrocketing in countries that have accepted the migrants with open arms.

Or that the countries which haven’t brought in so many migrants don’t have any terrorist attacks.

Or that migrant shelters often devolve into drunken riots where refugees burn down their own shelters, and assault police officers and their fellow refugees. Surely, that’s not something that this small town is equipped to deal with.

But most importantly, the media will never report on the fact that walls really do work.

The Map The Media Doesn’t Want You To See: Nation’s With The Most Refugees Have The Most Terror Attacks

The Future Of Multicultural Europe: German City With The Most Immigrants Also Has The Most Crime