The Fed Is Now The Proud Owner Of Bankrupt Hertz Bonds

On March 23 – the day the S&P dropped to its cycle low of 2,237 –  the Fed stunned capital markets when it announced it would purchase investment-grade corporate bonds, traversing a Rubicon into a secondary market intervention that not even  Ben Bernanke had dared to cross. A few weeks later, on April 9, the Fed doubled down by announcing it would purchase not only junk bonds from “fallen angel” issuers (an announcement which came just days after a quarter in which a record $150BN in investment-grade bonds were downgraded to junk, starting the long-awaited tsunami of “fallen angels”), but would also buy junk bond ETFs such as HYG and JNK.

This is what the Fed’s Secondary Market Corporate Credit Facilities term sheet said on this topic:

Naturally, the news cheered beaten-down markets and was enough to send junk bond ETFs such as JNK and HYG soaring.

One month later, following a surge in inquiry including from the bond king Jeff Gundlach as to when the Fed would actually start buying corporate bond ETFs, the Fed realized it would not be able to jawbone markets anymore and would have to put its money where its term sheet was, and on May 11 the NY Fed said it would “begin purchases of exchange-traded funds (ETFs) on May 12.”

And while the central bank said the focus of its ETF purchases would be on IG-focused ETFs, the New York Fed also disclosed it would start buying junk bonds ETFs as well:

Then, last Thursday, we reported that as part of the Fed’s record balance sheet, which for the first time ever surpassed $7 trillion, the Fed disclosed that it also held $1.8 billion under Corporate Credit Facility holdings, the line item that includes purchases of both investment grade (LQD) and junk bonds ETFs (HYG, JNK, etc). 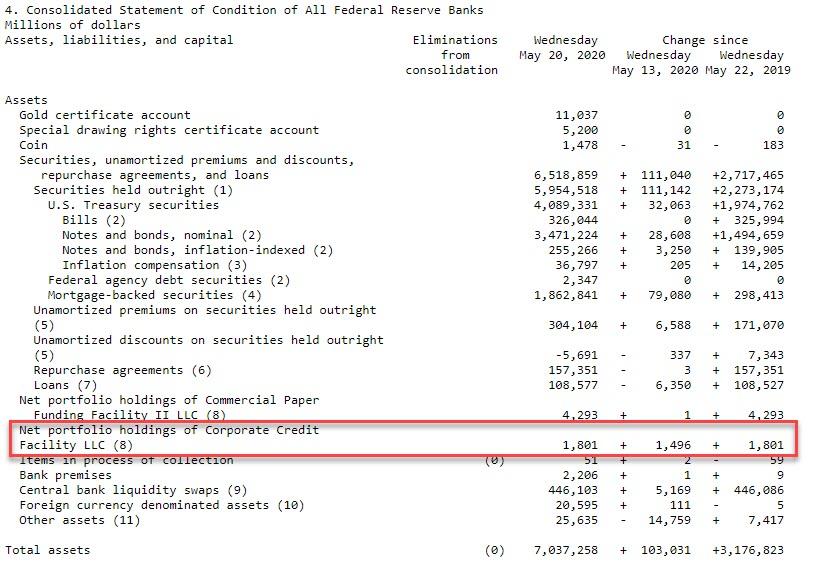 This came two days after Powell defended the Fed’s program to buy junk bonds during his testimony before the Senate Banking Committee, which asked how purchases of junk bonds is “helping folks on Main Street.” Powell flagged that the Fed allowed for buying bonds from so-called “fallen angels” to ensure there is “no cliff” between the two lending markets (even though as we pointed out previously, a clear cliff has formed), saying “we don’t want to have a cliff there to where investment grade markets are working well, but the leveraged markets are not, non-investment grade markets are not.”

He then added that “we made a very limited, narrow set of actions to support market function in these markets, including buying ETFs, and that’s had an effect to improve market function there.”

Powell concluded by saying “we’re not buying junk bonds generally across the board at all,” which of course is correct: he is merely buying ETFs that have junk bond constituents.

And this is where the Fed’s first major test of directly manipulating and intervening in market functioning is about to take place.

While the Fed’s H.4.1 statement does not breakdown how much of the $1.8 billion in ETF holdings is allocated to investment grade and how much is junk, it is safe to say that at least $1 dollar of that amount has been allocated to purchases of Junk ETFs.

That will be a problem for Powell, because a quick scan of the holdings of both HYG and JNK reveals that these junk bonds ETFs own, among the hundreds of other securities, several bonds from the just defaulted rental giant, Hertz.

Here are HYG’s holdings of HTZ bonds: they amount to just over $50MM in face value across 4 bonds (out of a total of $23.3BN in holdings across just over 1,000 bonds).

And yes, for those asking, both ETFs hold that infamous Hertz bond that was issued last November and that will default before paying a single coupon.

To be sure, we can only extrapolate but it is safe to say that the Fed’s holdings of both these ETFs are modest for the time being, and we assume that the bulk of ETF purchases have targeted the investment grade, LQD ETF; still the fact is that as of this moment, the Fed is a holder, via BlackRock and via HYG and JNK, of bonds which are in default, and which make the Fed a part of the Hertz post-petition equity once it emerges from bankruptcy!

This means that unless the Fed somehow manages to divest of Hertz bonds that comprise its HYG and JNK holdings, the US central bank is as of this moment a stakeholder in the Hertz bankruptcy process, and assuming there is no liquidation, will end up owning a pro-rata stake of the post-petition equity once the company emerges from bankruptcy in the not too distant future.

What happens then nobody knows: will the Fed take a vocal position in the company’s future? Can the Fed even own equities via a debt-to-equity swap? What happens when hundreds of other junk bonds default and the Fed ends up owning billions in post-petition equity pro forma for equitization?

We don’t know; we doubt anyone on Wall Street or in Congress knows. And we are certain that the Fed itself doesn’t know because, in its scramble to stabilize the bond market, it forgot that once companies file for bankruptcy (certainly there is no discussion in the Fed’s term sheets of what happens once its corporate bond holdings default) the Fed will – sooner or later – end up being an equity holder.

As a reminder, the ECB was faced with a similar scandal in Dec 2017 when it ended up holding bonds of insolvent Steinhoff, but back then Mario Draghi quickly liquidated the bonds and the market pretended nothing ever happened. The problem for Powell is that one look at the HYG and JNK holdings reveal dozens if not hundreds of companies which will file for bankruptcy within months if not weeks, suggesting the Hertz debacle is just the start of a bankruptcy flood in which the Fed will emerge as a key actor in bankruptcy court and Powell will have to explain away why it is now an equity stakeholder of bankrupt companies.

We eagerly look forward to Powell answering all these questions, hopefully as soon as this Friday when the Fed chair holds yet another video conference.