The Dumbing Down Of America: ‘The Numbers Speak Volumes’ 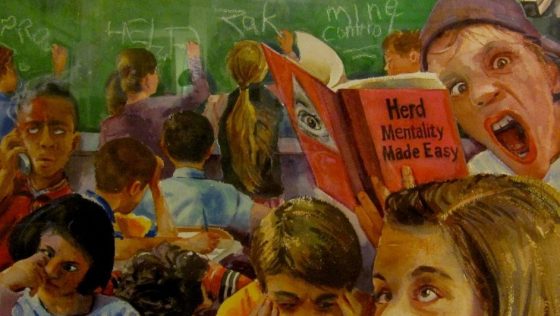 Almost everyone can see that the dumbing down of America is in full effect.  A video breakdown of a Psychology Today piece from 2014 which details the anti-intellectualism most of us have already experienced in some way.

According to Signs of the Times, there has been a long tradition of anti-intellectualism in America, unlike most other Western countries. Richard Hofstadter, who won a Pulitzer Prize in 1964 for his book, Anti-Intellectualism In American Life, describes how the vast underlying foundations of anti-elite, anti-reason, and anti-science have been infused into America’s political and social fabric. Mark Bauerlein, in his book, The Dumbest Generation, reveals how a whole generation of youth is being dumbed down by their aversion to reading anything of substance and their addiction to digital “crap” that is composed on social media.

Joe Joseph from The Daily Sheeple breaks it down in his new video. “You have plenty of these experts that are basically sounding the alarm,” he says. “Let’s keep it simple,” he continues. “I ask everybody a very simple question. If you think about what you learned from grade K to grade 12, give yourself a percentage of how much of that you actually use in your everyday life. Out of all of that information…now think about how much of your life experience weighs in.”

Joseph then goes over the statistics that have been compiled which are evidence of Americans getting dumber by the decade. Part of that, is because of the declining quality of higher education. After leading the world for decades in 25-34-year-olds with university degrees, the U.S. is now in 12th place. The World Economic Forum ranked the U.S. at 52nd among 139 nations in the quality of its university math and science instruction in 2010.

According to the 2009 National Assessment of Educational Progress, 68% of public school children in the U.S. do not read proficiently by the time they finish third grade. And the U.S. News & World reported that barely 50% of students are ready for college-level reading when they graduate:

We’re creating a world of dummies. Angry dummies who feel they have the right, the authority and the need not only to comment on everything, but to make sure their voice is heard above the rest, and to drag down any opposing views through personal attacks, loud repetition and confrontation. –Signs of the Times

The new elite are the angry social media posters; those who can shout loudest and more often, a clique of bullies and malcontents baying together like dogs cornering a fox. Rational thought is the enemy, says Bill Keller, writing in the New York Times.