The Disaster Myth Narrative: No One Panics, No One Loots, No One Goes Hungry

SHTFplan Editor’s Note: There will be no panic. The government will be there to help when everything around you falls apart. Those really smart people on TV said so. This is the 21st century, and we’re way past really bad things happening. 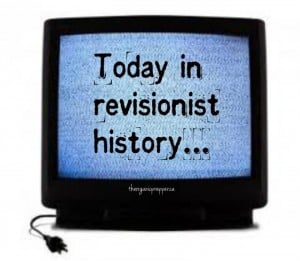 “The most effective way to destroy people is to deny and obliterate their own understanding of their history.”  ~ George Orwell

I was recently doing some research about the aftermath of some natural disasters that took place here in America. I was shocked to find that the articles I was looking for – ones that I had read in the past – were pretty hard to find, but articles refuting the sought-for pieces were rampant.  Not just one event, but every single crisis aftermath that I looked up, had articles that were written after the fact stating in no uncertain terms that the hunger, chaos, and unrest never happened.

Apparently we, the preparedness community, are all wrong when it comes to the belief that after a disaster, chaos erupts and civic disorder is the rule of the day.

According to “experts” it never happens. 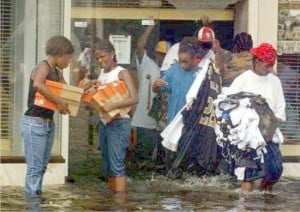 According to newspaper articles written after Superstorm Sandy devastated the East Coast and after Hurricane Katrina caused countless billions in damage in New Orleans, people were calm, benevolent and peaceful.  Heck, they were all standing around singing Kumbayah around a campfire, sharing their canned goods, calming frightened puppies, and helping the elderly.

Apparently studies prove that the fear of anarchy, lawlessness, and chaos is nothing but the “disaster myth”.  Reams of examples exist of the goodness and warmth of society as a whole after disaster strikes. All the stories you read at the time were just that – stories, according to the mainstream media:

Yet there are a few examples stubbornly fixed in the popular imagination of people reacting to a natural disaster by becoming primal and vicious. Remember the gangs “marauding” through New Orleans, raping and even cannibalizing people in the Super-Dome after Hurricane Katrina? It turns out they didn’t exist. Years of journalistic investigations showed them to be racist fantasies. They didn’t happen. Yes, there was some “looting” — which consisted of starving people breaking into closed and abandoned shops for food. Of course human beings can behave atrociously – but the aftermath of a disaster seems to be the time when it is least likely. (source)

Looting?  Only hungry people getting food from unmanned stores. Who wouldn’t do that?

Beatings and assaults?  Didn’t happen. Disturbed people made these stories up for attention.

Gang rapes?  No way. You watch too much Law and Order: SVU.

Murder, mayhem, and gangs of youth on the streets?  Silly readers – we just made that up. The Disaster Myth is a narrative created by the establishment and delivered by their stoolies in the mainstream media.  The Disaster Myth points fingers at many of the things that are commonly believed to be true by the preparedness community.  Included in this narrative:

These statements all stand in direct opposition to the stories we hear from news sources during the crisis.  We heard terrible stories from eyewitnesses who suffered from hunger, thirst, and unsanitary condition in the Superdome after Katrina.  We heard about citizens being robbed of their 2nd Amendment rights by police after the crisis, and we heard about gang rapes, looting, and mayhem.  Fast forward to Sandy where people were defecating in the hallways of their high rise apartments and digging through garbage to find food just a few days after the storm.  As for the official response, who can forget the FEMA shelter that closed because of inclement weather?  Of course the weather was inclement – it was a freaking weather-related disaster!

Mac Slavo of SHTFplan wrote of the unrest, discomfort, and mayhem after Superstorm Sandy ransacked the East Coast:

Limited electricity has made it possible for some to share their experiences: At the time of the event, even the mainstream reported on the affluent East Side residents dumpster diving in search of food. Was this NBC report, complete with video, a work of salacious fiction ? As far as civil unrest is concerned, the “Twittersphere” was jammed with people planning looting sprees in the aftermath of Superstorm Sandy.  Those who were already of criminal leanings saw the disaster as a great opportunity. In the great North American Edit, however, these tweets are said to be part of the myth – apparently they were just kids playing around.  Some reports pooh-poohed the very idea that looters had run amok. This article from Prison Planet refutes all of the refuting and says that the civil unrest DID occur, and that it generally does given evidence from past events.

Legends from the past? Every single extreme weather event in recent years in the United States has been followed by looting.

As MSNBC reported at the time, looting during Hurricane Katrina was so prevalent that it “took place in full view of police and National Guard troops.”

Residents described the scenes as being like “downtown Baghdad” as looters filled garbage cans full of stolen goods and floated them down flooded streets.

As Forbes’ Erik Kain points out, “looting and rioting…occur after most natural disasters,” including after Hurricane Irene as well as Hurricane Isaac.

Does this sound familiar?

This revision of inconvenient history will sound quite familiar to anyone who has read George Orwell’s masterpiece 1984 (which was not meant to be an instruction manual, by the way.)  In the novel, the main character, Winston Smith, worked for the Ministry of Truth, which was actually a department of propaganda whose job it was to rewrite any faction of history that did not make the government look omniscient.

In George Orwell‘s novel Nineteen Eighty-Four, the Ministry of Truth is Oceania‘s propaganda ministry. It is responsible for any necessary falsification of historical events. The word truth in the title Ministry of Truth should warn, by definition, that the “minister” will self-serve its own “truth”; the title implies the willful fooling of posterity using “historical” archives to show “in fact” what “really” happened. As well as administering truth, the ministry spreads a new language amongst the populace called Newspeak, in which, for example, truth is understood to mean statements like 2 + 2 = 5 when the situation warrants.

The Ministry of Truth is involved with news media, entertainment, the fine arts and educational books. Its purpose is to rewrite history to change the facts to fit Party doctrine for propaganda effect. For example, if Big Brother makes a prediction that turns out to be wrong, the employees of the Ministry of Truth go back and rewrite the prediction so that any prediction Big Brother previously made is accurate. This is the “how” of the Ministry of Truth’s existence. Within the novel, Orwell elaborates that the deeper reason for its existence is to maintain the illusion that the Party is absolute. It cannot ever seem to change its mind (if, for instance, they perform one of their constant changes regarding enemies during war) or make a mistake (firing an official or making a grossly misjudged supply prediction), for that would imply weakness and to maintain power the Party must seem eternally right and strong. (source)

So why the vast effort to expunge tales of mayhem and to make it seem like our own national disasters really weren’t that bad?

Self-sufficiency means freedom.  When you can feed yourself, clothe yourself, shelter yourself, and protect yourself, you are far less likely to need to cede your freedoms  in order to stay alive. And in a police state that is frantically trying to withdraw our constitutional rights, this just won’t do.  They need leverage.

So the establishment has created a narrative that tells us what we are doing is silly and unnecessary.  They are rewriting history even though we only lived that history in the past decade.  Even though we know the truth of the matter because we watched it live, they are changing the facts to make us doubt our own perceptions.

This narrative was created to make a society of anti-preppers – of people who believe that all will be right with the world, the government is kind and benevolent, potential disasters aren’t really that big of a deal, and that preppers are stark raving lunatics.  They want us to be perceived as extremists so that others are less likely to follow our examples. If they need a crazy bad guy at whom to point the finger, all they have to do is call someone a “Doomsday Prepper”. (Remember how poor Nancy Lanza was vilified after the Sandy Hook shooting last year?)

If this civil unrest is not occurring, why is the National Guard called to keep the peace?  Why are state police riding around on tanks wearing body armor? Why were the guns of law-abiding citizens taken away in the aftermath of Katrina? My family and I have opted to be prepared with food, water, a self-defense strategy, and home security.  We believe that when bad things happen, worse things often follow before order is restored.  We won’t be lining up to get an MRE and a bottle of water to share amongst us. We won’t require a cot at Camp FEMA.  We won’t need to give up our firearms in order to get our next meal.

Which reality are you going to believe?  The one that you witnessed or the perverted rewrite that the mainstream media is trying to push upon you for the benefit of their handlers?

A sampling of articles and studies supporting the Disaster Myth Narrative:

Please feel free to share any information from this site in part or in full, giving credit to the author and including a link to this website and the following bio.