The Collapse Has Already Begun: “Currencies Are Crashing Hard, Recessions Are Starting” 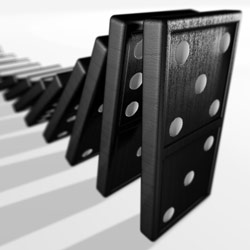 This article was graciously contributed by Michael Snyder and originally published at his Economic Collapse blog.

Editor’s Comment: In this installment, Snyder makes the argument that the next economic crisis is already underway, while we’re standing around wondering when it will happen. For average people struggling under rapidly changing conditions, this may well be the case. The hard times have already hit for many… and obviously, much, much worse can happen.

You can stop waiting for a global financial crisis to happen.  The truth is that one is happening right now.  All over the world, stock markets are already crashing.  Most of these stock market crashes are occurring in nations that are known as “emerging markets”.  In recent years, developing countries in Asia, South America and Africa loaded up on lots of cheap loans that were denominated in U.S. dollars.  But now that the U.S. dollar has been surging, those borrowers are finding that it takes much more of their own local currencies to service those loans.  At the same time, prices are crashing for many of the commodities that those countries export.  The exact same kind of double whammy caused the Latin American debt crisis of the 1980s and the Asian financial crisis of the 1990s.

As you read this article, almost every single stock market in the world is down significantly from a record high that was set either earlier this year or late in 2014.  But even though stocks have been sliding in the western world, they haven’t completely collapsed just yet.

In much of the developing world, it is a very different story.  Emerging market currencies are crashing hard, recessions are starting, and equity prices are getting absolutely hammered.

Posted below is a list that I put together of 23 nations around the world where stock market crashes are already happening.  To see the stock market chart for each country, just click the link…

Of course this is just the beginning.  The western world is going to feel this kind of pain as well very soon.  I want to share with you an excerpt from an article that just appeared in the Telegraph entitled “Doomsday clock for global market crash strikes one minute to midnight as central banks lose control“.  You see, the Telegraph is not just one of the most important newspapers in the UK – it is truly one of the most important newspapers in the entire world.  When it speaks on financial matters, millions of people listen very carefully.  So for the Telegraph to declare that the countdown to a “global market crash” is “one minute to midnight” is a very, very big deal…

When the banking crisis crippled global markets seven years ago, central bankers stepped in as lenders of last resort. Profligate private-sector loans were moved on to the public-sector balance sheet and vast money-printing gave the global economy room to heal.

Time is now rapidly running out. From China to Brazil, the central banks have lost control and at the same time the global economy is grinding to a halt. It is only a matter of time before stock markets collapse under the weight of their lofty expectations and record valuations.

I encourage you to read the rest of that excellent article right here.  It contains lots of charts and graphs, and it discusses many of the exact same things that I have been hammering on for months.

When one of the newspapers of record for the entire planet starts sounding exactly like The Economic Collapse Blog, then you know that it is late in the game.

Others are sounding the alarm about an imminent global financial crash as well.  For example, just consider what Egon von Greyerz recently told King World News…

Eric, I fear that this coming September – October all hell will break loose in the world economy and markets. A lot of factors point to that, both fundamental and technical indicators and this indicates that we could have a number of shocks this autumn.

Sadly, most investors will hold stocks, bonds and property and will see any decline in value as an opportunity. It will be a long time and a very big fall before they realize that the system will not help them this time because the central bankers have run out of ammunition to save the global financial system one more time. Yes, we will see more massive money printing, but it will just make things worse. And at some stage, which could be quite soon, real fear will set in, a fear of a magnitude the world has not experienced before.

Hmm – there is another example of someone talking about September.  It is funny how often that month keeps coming up.

The “smart money” has been pulling their money out of stocks for quite a while now, and at this point a lot of others have hopped on the bandwagon.  The following comes from CNBC…

The flight of investor money from U.S. stocks has turned into a stampede.

In fact, the $78.7 billion leaving domestic equity-focused funds has been worse in 2015 than it was even during the financial crisis years, when the S&P 500 tumbled some 60 percent, according to data released Friday by Morningstar. The total is the highest since 1993.

Domestic equity funds surrendered $20.4 billion in July alone and have seen $158.6 billion in redemptions over the past 12 months. Even a strong flow of money into passively managed exchange-traded funds has been unable to offset the stream to the exit among retail investors, who generally focus more on mutual funds than ETFs.

So those that were claiming that one would not happen in 2015 are already wrong.

Over the coming months we will find out how bad it will ultimately be.

Sometimes I get criticized for talking about these things.  There are a few people out there that don’t like all of the “doom and gloom” that I discuss on my website.  Apparently it is a bad thing to talk about the things that really matter and we should all just be “keeping up with the Kardashians” instead.

I consider myself just to be another watchman on the wall.  From our spots on the wall, watchmen such as myself all over the nation are sounding the alarm about what we clearly see coming.

Every day I just do the best that I can with what I have been given.  And there are many others just like me that are doing exactly the same thing.

Those that do not like the warning message are going to feel really stupid when things start falling apart all around them and they finally realize how wrong they truly were.