The American Consumer Cannot Prop Up The Economy Forever: “Something Has To Give” 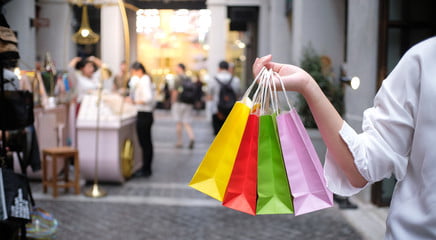 While consumer confidence can boost the economy and spending can drive growth, the consumer cannot prop up the economy forever. Wages are not keeping pace with price increases, so at some point, “something has to give.”

In spite of the trade war and tariffs driving up prices, the latest evidence that the American consumer is unaware that a recession could be on the way is the University of Michigan’s consumer sentiment survey released Friday. Consumer sentiment rose to a three-month high of 96, beating consensus expectations and remaining near record levels. Even as economic growth abates and business investment and confidence have faltered in the face of an ongoing United States-China trade dispute, the U.S. consumer has continued to spend money and reflect confidence in sentiment surveys.

According to Market Watch, this rampant consumerism can’t last forever. The reading is bullish for U.S. equities as it predicts the U.S. consumer will continue to spend at a very high rate headed into the holiday season. However, it also stands in stark contrast to other measures of the economy, including recent surveys by the Institute for Supply Management of the manufacturing and services sectors and measures of business executive confidence, which fell to the lowest level since the first quarter of 2009 in October.

“I’m not sure if we’ve seen this disparity between positive consumer sentiment and negative business confidence at this level,” Michael Arone chief market strategist at State Street Global Advisors, told Market Watch. “From my perspective, something has to give. Either businesses have to be more confident, or you’re likely to see more rollover on the consumer data.”

But others say this isn’t necessarily a bad thing. As Sundial Capital Research pointed out on Twitter, previous instances of high consumer confidence and low executive confidence have actually turned out well for stocks.

The narrative that "dumb money" consumers are optimistic while "smart money" insiders are prepping for a recession sounds really good and bearish. It's also useless.

The only 2 other times it happened, stocks took off to the upside.

JJ Kinahan, chief market strategist at TD Ameritrade said that in the near term, it’s unlikely that American shoppers will slow their spending and cull their consumerism. “People are employed and when they are employed they spend money,” he said. “Heading into the holiday season, I see no reason why the consumer would slow barring some disaster.”

But the weakness in the manufacturing sector will, at some point, hit the consumer. Liz Ann Sonders chief investment strategist at Charles Schwab told MarketWatch that while some analysts are eager to write off manufacturing weakness as inconsequential due to that sector’s shrinking role in the American economy, “there’s a reason why indices of leading economic indicators rely on manufacturing. It’s because there’s a multiplier effect from the sector that filters through to others.” She added:  “Manufacturing weakness often tips over into the consumer side.”