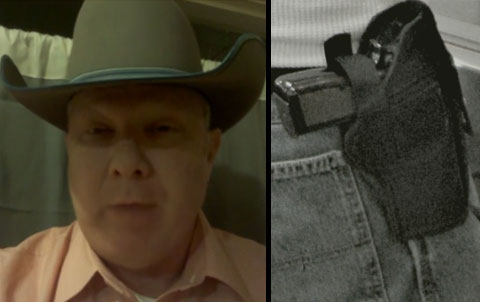 An East Texas police chief has cautioned the president against trying to enact further gun control measures and called upon all Americans, and particularly those in his tiny town, to arm themselves legally to withstand the threat of terror attacks or mass shootings on U.S. soil.

Police Chief Randy Kennedy sounded off in a video posted to Facebook after President Obama’s recent speech on terrorism, advising him to change his course, stating “if you try to disarm us, sir, then you will cause a revolution in this country to occur.”

Via the Associated Press:

A Texas police chief who warns President Barack Obama in a social media video that trying to disarm Americans would “cause a revolution in this country” is the latest law enforcement official to urge citizens to arm themselves in the wake of mass shootings.

Randy Kennedy, longtime chief in the small East Texas town of Hughes Springs, about 120 miles east of Dallas, says in the video posted this week on his personal Facebook page that the Second Amendment was established to protect people from criminals and “terrorists and radical ideology.”

“It’s also there to protect us against a government that has overreached its power,” Kennedy says in the video.

Many others have expressed similar sentiments about Obama’s actions, and it has become less uncommon for sheriffs and local law enforcement officials to speak out against the President, particularly when it comes to issues like the 2nd Amendment and immigration.

Police Chief Kennedy started by expressing his disappointment with the latest moves from the White House to enact gun control as a reaction to terrorism.

Here’s what the chief said in the video:

“I watched President Obama tonight and heard what he had to say about confronting terrorism, and I didn’t find his words encouraging at all.”

“As law enforcement, we cannot protect every single one of you, we can’t be there all the time. We can’t be everywhere all the time. And especially in a rural community where we have limited manpower and limited resources. So as such, I am encouraging you strongly to arm yourselves. We need to send a message to the criminal element as well to these terrorists and these jihadi who want to murder in the name of their god, and the criminal element that want to go out, you know, and just totally destroy our way of life.”

“Because I know that we as law enforcement do the very best we can to protect our citizens, and we do a good job. But I know if the tables are ever turned on me, or one of my officers, that I want one of my citizens, or a group of my citizens coming to our aid and rescue – and I don’t want you running out of bullets and I don’t want you running out of guns before you pull our bacon out of the fire.”

“You are not our potentate, sir. You are our servant. And you were elected to serve and protect us first. And I suggest, sir, since you’re a constitutional expert, that you better review your history on the Constitution and understand that we are a free people. And we are subject to no one other than the almighty God and Jesus Christ the King. And as such, sir, I strongly encourage you to trust the law-abiding American citizen, because we won’t fail you and we won’t let you down. But if you try to disarm us, sir, then you will cause a revolution in this country to occur. So please revise your thinking, because we are not your enemy, the law-abiding gun owner in this country.”

He reiterated his recommendation that all Americans arm themselves, cautioning “Be ready when the wolf comes to the door, because it’s on its way.”

While the mainstream media is reporting on President Obama’s next wave of executive orders on gun control, the AP notes that this past Black Friday was the single biggest day ever for FBI background checks for firearms purchases:

The FBI said last week that it processed a record number of firearms background checks on Black Friday, the busy shopping time the day after Thanksgiving. The agency processed 185,345 background checks – roughly two per second – the same day that three people were killed and nine others wounded in an attack at a Planned Parenthood office in Colorado.

The previous record for the most background checks in a single day was Dec. 21, 2012, about a week after 20 children and six adults were shot to death in a Connecticut elementary school. The week following the massacre at Sandy Hook Elementary saw the processing of 953,613 gun background checks.

Here are a few of the thoughts of the founding fathers on where the line should be drawn on the possession of firearms in a free country:

The Constitution preserves “the advantage of being armed which Americans possess over the people of almost every other nation. . . (where) the governments are afraid to trust the people with arms.” – James Madison, The Federalist, No. 46

“If circumstances should at any time oblige the government to form an army of any magnitude, that army can never be formidable to the liberties of the people while there is a large body of citizens, little if at all inferior to them in discipline and the use of arms, who stand ready to defend their rights and those of their fellow citizens.” – Alexander Hamilton, The Federalist, No. 29

“The strongest reason for the people to retain the right to keep and bear arms is, as a last resort, to protect themselves against tyranny in government… God forbid we should ever be twenty years without such a rebellion…. And what country can preserve its liberties, if its rulers are not warned from time to time, that this people preserve the spirit of resistance? Let them take arms…. The tree of liberty must be refreshed from time to time with the blood of patriots and tyrants.” – Thomas Jefferson, various