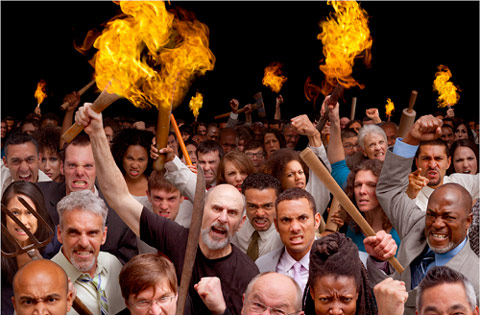 There are literally millions of people in the United States who’ve become deeply entrenched in a struggle to find or hold a good job, while keeping expenses covered on the income they do make.

But most people assume they will shielded from the worst of it, that at some point things will pick up.

Sadly, the forecast is much darker, and the next financial collapse much deeper than almost anyone has prepared for. The outlook from this global strategist at the Macquarie Group is beyond doom and gloom – it is a literal existential crisis.

Do you feel something is wrong with the United States and the global economy? Despite a respectable recovery and low unemployment, many people aren’t happy with their current economic situation or their outlook for the future. From rising prices for basic necessities or schooling, to harsh competition and low pay for lower income jobs to negative interest rates—the poor and the middle class all have their problems to deal with.

Experts in the government or central banks are trying to manage a suboptimal situation but cannot isolate the problem, let alone offer solutions. Or maybe they know what’s wrong but don’t want to talk about it because the truth is too shocking.

“The private sector will never recover, it will never multiply money again,” he told Epoch Times in an interview. His main theme is the “declining return on humans,” which means that in today’s digital world, normal humans don’t grow productivity fast enough to justify more jobs and higher wages as the machines are taking over.

“There is no productivity on a global basis. Secular stagnation, technological shifts, monetary policy, all are suppressing productivity growth rates,” he says. But what about technology making humans more productive? Shvets says this was true in the first and second industrial revolution where displaced jobs such as horse-cart drivers eventually morphed into higher tech and higher productivity ones like the taxi driver.

However, in this, the third industrial revolution, machines are not augmenting humans, they are replacing them. The self-driving car will completely eliminate the driver.

“We are now on the sharp end of the technology S curve. It started in the late 1970s, it’s picked up in the last 5-10 years, productivity growth rates go down not up. It takes time to line up machines, and this time we are replacing humans altogether,” he said.

We are all familiar with the rise of technology, and the grave threat that it imposes.

The trade off for convenience and automatic work is the end of the need for human  labor.

It is built in, and the system will need “something” to do with everyone. Busy work, bureaucrat bees and a widespread service economy will only go so far. There has to be some value produced, and something that is needed.

Suffice to say, the powers-that-be will not be interested in maintaining a large population for very long. The world isn’t over-populated in terms of resources and landmass, but in terms of a viable economy.

This is the end of the line. Terminal.

Did you see it coming? The elites have known for quite some time:

Proof! They Knew 60 Years Ago That Human Workers Would Soon Become Obsolete
With The New Technological Revolution

The chart below, produced by the Macquerie Group, identifies several of the leading jobs that will be completely replaced by robots, AI and/or computer programs.

But just because you are not a telemarketer, accountant, retail clerk, truck driver or secretary – and your kids don’t want to go into these professions – in no way means that you are spared.

There are an estimated 3.5 million truck drivers operating in the United States alone, and nearly all of them stand to be replaced by self-driving vehicles. Where will all these people find work once they receive their pink slips?

What happens when people get used to order food at restaurants from an iPad, and like the fact that the computer doesn’t get their order wrong, or forget to leave off the tomatoes?

There will be incredible pressure from over-qualified college graduates applying 100-to-1 or even 1000-to-1 for good jobs, or even any job at all.

Government will naturally pick up the tab, providing something considered a “living wage” to the masses that become unemployed, and must eat, pay rent and keep the lights on. Poverty will be institutionalized.

But that system can’t hold.

Something has to go, and, sadly, it’s going to be us.

Everyone will be at the bitter bottom, or a token notch above. But, barring a very magical solution, things will likely be very harsh.

If the opposite occurs, and human government maintains control (through tight central control and socialist redistribution), or the robots keep us well cared for, then there is an equally disturbing problem – we’ll become pets.

People without a purpose.

And having no purpose, no problems is not a good thing. People who feel like they no longer have a purpose tend to become very depressed, detached and despondent.

Just take a look at the disastrous results from a lab experiment in the 1970s that simulated a rat “utopia,” where all needs were provided for, food was abundant and even the housing was nice.

In 1972, animal behaviorist John Calhoun built a mouse paradise with beautiful buildings and limitless food. He introduced eight mice to the population. Two years later, the mice had created their own apocalypse. Here’s why.

Universe 25 started out with eight mice, four males and four females. By day 560, the mouse population reached 2,200, and then steadily declined back down to unrecoverable extinction. At the peak population, most mice spent every living second in the company of hundreds of other mice. They gathered in the main squares, waiting to be fed and occasionally attacking each other. Few females carried pregnancies to term, and the ones that did seemed to simply forget about their babies. They’d move half their litter away from danger and forget the rest. Sometimes they’d drop and abandon a baby while they were carrying it.

The few secluded spaces housed a population Calhoun called, “the beautiful ones.” Generally guarded by one male, the females—- and few males — inside the space didn’t breed or fight or do anything but eat and groom and sleep. When the population started declining the beautiful ones were spared from violence and death, but had completely lost touch with social behaviors, including having sex or caring for their young.

In 1972, with the baby boomers coming of age in a ever-more-crowded world and reports of riots in the cities, Universe 25 looked like a Malthusian nightmare. It even acquired its own catchy name, “The Behavioral Sink.” If starvation didn’t kill everyone, people would destroy themselves.

Basically, the “elites” of the rat experiment hoarded all the best conditions for themselves, and forced the masses live among themselves in a state of violence and decline.

Yet, these “beautiful elites” declined sex and social interaction, instead isolating themselves and doing nothing but eating and grooming… and literally became very stupid.

He thinks the Biblical debt jubilee, where slaves would be freed and debt would be forgiven every 50 years is a nice idea that would also work today if it weren’t for entrenched special interests.

“The debt is not spread evenly, we still live in a tribal world, and it’s easier to start a war than to forgive debt,” Shvets said.

Eventually, if the private sector doesn’t recover and the state assumes more power, Shvets thinks countries will move toward fascism and communism again, just like in the 1920s and 1930s whose economic framework is comparable to today’s.

And it won’t recover. This is really happening.

Fascism and communism are just terms for the collective – everyone under one umbrella, managed from above, by the insiders, the elites and the government officials. Shvets points to Venezuela as the extreme example.

These trends are headed for total disaster, and there is no clear way to halt or stop it. But somebody had better find a solution – hopefully a good one – before it is too late.

Seriously, this is too important to miss or ignore. Please share this news with everyone… even if it will go over as “depressing,” “negative” or “bleak.”

This just something that everyone deserves to see coming… whatever the future may actually hold.

Is anyone outside of the prepping and homesteading community even remotely prepared for this?