Teen Tackled By Police Because “Someone Felt Uncomfortable” at Bank ATM 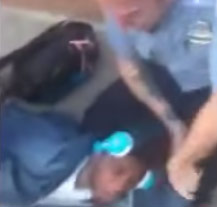 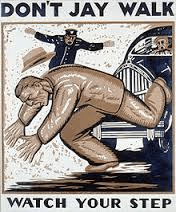 Better watch out next time you are idly standing anywhere near an ATM in a public place. It could get you arrested.

It’s an incident that some have dubbed “banking while black.” But the issue is hardly reduced to race. What happens if you are put under suspicion just for no reason? It could also happen easily to any person of any color, under the right set of wrong circumstances.

Fresh protests have sprung up protesting the actions of police an 18-year old black teen identified as Jason Goolsby was tackled and detained after a white couple reportedly called in a suspicious report on three black teens standing around a bank ATM. No crime was committed, but Goolsby was tacked after running from police responding to the call and “resisting,” which led to his being put in handcuffs. His friend was also detained for filming the incident and ‘interfering.’

Here’s the 30 second video that is stirring the latest controversy:

Footage filmed by a friend showed Goolsby yelling and screaming as he was manhandled by two officers, who twisted his arms behind his back and placed their knees on his body to keep him on the ground. “I’m not resisting,” he said, as one officer appeared to prepare to handcuff him.

The friend, who was identified in the clip as Mike, posted the video on Twitter on Monday evening. He wrote that the pair had been “harassed and assaulted because ‘someone felt uncomfortable around us’ at the bank”. The footage showed that Mike was also detained by officers after they ordered him to step back. Officials claimed he was “interfering with police”. Neither man was officially arrested.

Conboy later confirmed that “no criminal act was found to have taken place after the individuals were stopped and interviewed” and said the department was “reviewing the circumstances surrounding the stop to ensure that policies and procedures were followed”.

Not only was there no evidence that the 18-year old was doing anything wrong, but Goolsby is apparently a good student and scholarship winner enrolled at Howard University there in Washington, D.C. were the incident took place:

Goolsby is understood to have graduated from Washington’s Richard Wright Public Charter School for Journalism and Media Arts this year. Last December he was awarded a $1,000 college scholarship by Alpha Phi Alpha, the black fraternity whose alumni include Martin Luther King Jr and Thurgood Marshall, the first African American justice on the US supreme court.

Though the incident ended without further arrest and fortunately no one was harmed, it underscores the police state atmosphere of mutual suspicion and animosity between the black community and police, between the establishment and the the people.

Today we we’re harassed and assaulted because ” someone felt uncomfortable around us ” in a bank . RETWEET ‼️ pic.twitter.com/E2XZaOgJgM

Apparently the lesson is that people should be careful to appear proper and unassuming, because anyone could turn on you for the slightest reason, and trigger a potentially dangerous encounter with police – even over what is legitimately a misunderstanding. Police may regard you as a potential criminal, and you may face arrest, abuse and interrogation, even if you have done nothing wrong.

Ultimately, police determined he had committed no crime and released him without arrest. But part of the damage had been done.

Meanwhile, banks have been encouraged to rat on customers too, with police and federal authorities now instructing banks to report any ‘suspicious’ activities – including withdrawing large sums of cash… particularly as police are able to simply seize cash in many of cases – without having to return it even to those who are innocent:

“[W]e encourage those institutions to consider whether to take more action: specifically, to alert law enforcement authorities about the problem, who may be able to seize the funds, initiate an investigation, or take other proactive steps.”

So what exactly constitutes ‘suspicious activity’? Basically anything.

[…] It’s utterly obscene. According to the Justice Department, going to the bank and withdrawing $5,000 should potentially prompt a banker to rat you out to the police.

But what goes around, comes around. America is becoming a police state, and many have been foolish enough to ask for their own enslavement.