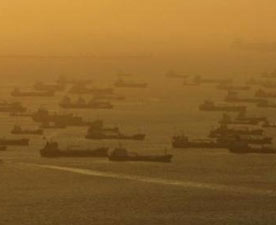 While oil prices have jumped about 50% in recent weeks, there appears to be no real reason for the move other than pure speculation and billion-dollar market cash infusions from unknown plunge protection teams.

But as the mainstream media continues to tout non-existent reduction agreements between oil producing nations, the following evidence suggests that the world remains awash in oil, so much so that there is no space to store it… anywhere on earth.

The following report from Zero Hedge explains just how much oil is currently sitting in limbo while suppliers try to figure out what to do with it:

Last week we revealed what we thought was a “shocking photo” of nearly 30 oil tankers caught in a traffic jam off the Iraqi coast, an indication of just how much excess oil is currently parked offshore. 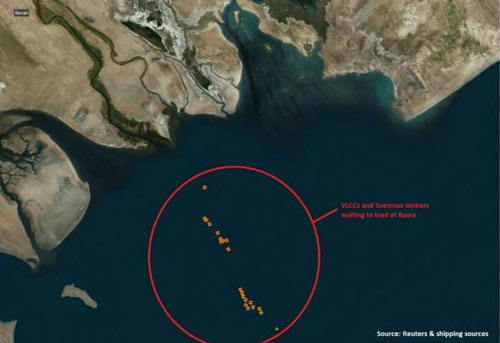 But the photo above, meant to do DB’s thesis justice, was nothing in comparisons to what Reuters would reveal today.

Because as ports struggle to cope with a global oil glut, huge queues of supertankers have formed in some of the world’s busiest sea lanes, where some 200 million barrels of crude lies waiting to be loaded or delivered, Reuters reports today.

The vessels, filled with oil worth around $7.5 billion at current market prices, would stretch for almost 40 km (25 miles) if formed up in one straight line.

Something not quite so theoretical, and yet almost identical taking place right now, is shown in the photo below, which shows VLCC supertankers traveling between India and Southeast Asia, courtesy of Reuters. 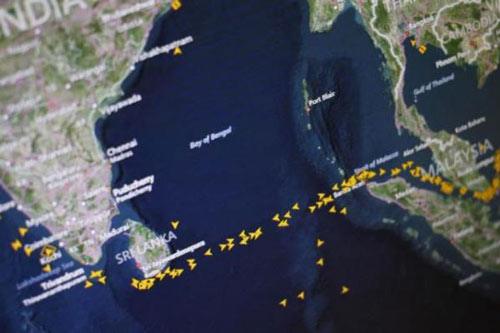 And while the market is for now clearly ignoring the unprecedented accumulation of oil in offshore storage, a bearish indicator of just how much oil will hit markets if and when prices continue rising or when collapsing contango makes it no longer economic to hold for many it is an all too real daily existence.

The unprecedented number of ships at sea filled with cargo and just waiting for the signal to offload is also causing congestion between the main producer and consumer hubs.

Almost all supertankers heading to Asia pass by Singapore or adjacent facilities in southern Malaysia, the world’s fuel station for tankers and also a global refinery and ship maintenance hub.

Shipping data shows that some 50 supertankers are currently anchored in or close to Singaporean waters for refueling, maintenance or waiting to deliver crude to refineries or be used as floating storage.

This can be seen in the following Reuters photo of oil tankers lining up on the eastern coast of Singapore. 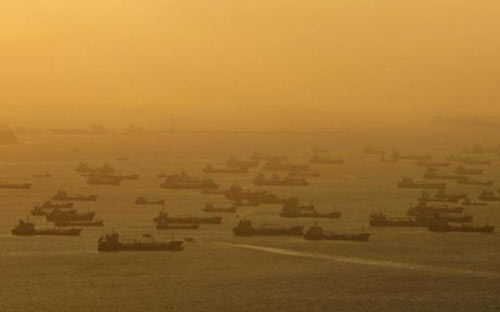 While we struggle to figure out why the price of oil has sky rocketed, one can’t help but think there must be some level of manipulation involved.

In a separate report Zero Hedge revealed that the Federal Reserve met with banks who are holding tons of energy related toxic assets on their books and basically told them to hide the losses for as long as they can. Wells Fargo, in particular, reported today that they are on the hook for some $32 billion in exposure to junk rated oil and gas companies.

The reports confirm what resource strategist Marin Katusa said would happen just last month when he warned that banks and energy companies would first extend their debt as far out as possible, and then simply pretend it didn’t exist. The consequence of the manipulated numbers and continued supply glut, according to Katusa, means that oil will stay lower for longer:

Because what banker in their right mind wants to get dirty and actually operate an oil field?

So the debt will be amended, extended and then they’ll pretend.

… Because you can’t just shut down an oil field. You have to reclaim those wells, which means you have to shut them down and environmentally reclaim them… and it costs more to do that today than what the actual value is.

The bankers know that.

… With innovation, in the Western world, costs will decrease and the bankers have no choice but to amend, extend and pretend the debt.

So they’re going to go lower for longer.

The Russian energy minister said this week that he is confident oil prices will be at $65 by 2017.

Yet, we remain skeptical until the massive supply glut is cleared out.

While we’ll stop short of attempting to forecast what happens next with oil prices, the evidence suggests that something is fundamentally wrong in the pricing mechanism for global oil prices.

If oil were to drop back to the January lows of around $26 per barrel, then all of those defaults in the energy industry may very quickly be realized.

And that has the potential to crash equities markets as a whole, just as we saw during the first few weeks of 2016.

As we noted earlier this year, such a crash in oil prices, or even continued low prices at current levels, could cause the most destructive economic situation since the Great Depression:

For the first time in 18 years, oil exporters are pulling liquidity out of world markets rather than putting money in. The world is now fast approaching a world reserve currency shift. If we see 8 to 12 months at these oil prices; U.S. shale industry will be wiped out. The effect on junk bonds will cascade to the rest of the stock market and U.S. economy.

…and this time there will be nothing left to catch the falling knife before it hits the American economy right in the heart. Not the FED nor the U.S. government can stop what’s coming. Liquidity will freeze up, our credit will be downgraded, the stock market will start to collapse, and then we can expect the FED to come in and hyper-inflate the dollar. This will cause the world to finish abandoning the world reserve currency in the last rungs of trade. This will be the end of the petrodollar.

We know the global economic system and the U.S. economy in particular is under extreme stress.

The only question at this point is: what will be the catalyst that sets the whole thing aflame?