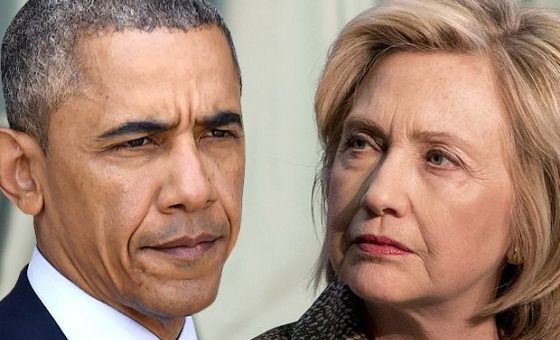 Fox News Business analyst Stuart Varney recently wrote an article demanding to know what Barack Obama, the sitting president, knew at the time of surveilling the Trump campaign. Varney alleges that deeply entrenched Obama bureaucrat tried desperately to cover for Hillary Clinton while doing everything they could to destabilize Donald Trump.

Texts exchanged by FBI agent Peter Strzok and his mistress Lisa Page reveal probable involvement by former President Barack Obama in the 2016 investigation of Hillary Clinton’s use of a private email server.

The text messages clearly state that Barack Obama wanted all the details of the investigation into Hillary Clinton’s email scandal.  This would mean that Obama was well aware of everything that was taking place at the time.

According to Fox News, the text messages between FBI paramours Peter Strzok and Lisa Page include an exchange about preparing talking points for then-FBI Director James Comey to give to President Obama, who wanted “to know everything we’re doing.” The message, from Page to Strzok, was among thousands of texts between the lovers. The pair both worked at one point for Special Counsel Robert Mueller’s probe of alleged collusion between the Trump campaign and Russia. –SHTFPlan

But does that mean he knew of the surveillance of Donald Trump’s campaign? Probably, and there’s evidence of that as well.  Considering the spying was done in the name of “national security,” as the sitting president, Obama would have been notified.

The evidence is simply undeniable. Levin lays out a devastating case utilizing publicly available documents and investigations that prove without a shadow of a doubt that President Obama inserted himself into a free election in an effort to stifle and delegitimize Trump’s Presidential aspirations. Six federal agencies were involved, including FBI, CIA, NSA, DOJ, Treasury Department Financial Crimes Enforcement Network and the Director of National Intelligence:

The evidence is overwhelming… this is not about President Trump’s tweeting… this is about Obama’s spying… And the question isn’t whether it spied… we know they went to the FISA court twice… it’s the extent of the spying… that is, the Trump campaign, the Trump transition, Trump surrogates… and I want to walk you through this, the American people… this is all public… –Mark Levin

The bottom line here is that top officials in the Obama team spied on a presidential campaign which they feared, and did not like. You can call this person a spy, or an informant. It doesn’t really matter because that kind of surveillance is out of bounds, according to Varney.

This was all supposed to be covered up and just go away because Hillary was supposed to be a shoo-in, and in that case, none of this would come out. But Trump won, and now the backstory is coming out and the “Russian election meddling” investigation is only making this worse for the FBI and deep state Democrats.  Entrenched Obama bureaucrats clearly tried to cover for Hillary, and destabilize the new president.  That’s not even up for debate anymore.