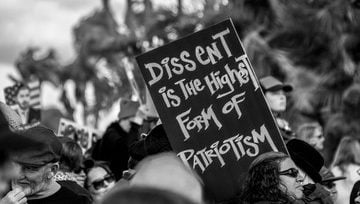 We are finally seeing a massive pushback against the tyrannical government.  People are getting tired of living under the boot of authoritarianism, and are disobeying the commands of politicians.

Politicians are just humans, and as such, have no power unless they are willing to violence to enforce their will.  That’s where law enforcement comes in.  But fortunate, we are finally seeing people get off their knees and stop bowing to the ruling class.  Instead, they are doing what we suggested weeks ago: stop asking permission and live like the free sovereign human being you were born as. People in South Haven, Michigan have finally stood up.

Democratic Governor Gretchen Whitmer’s latest shutdown extension, which was ordered without the support of the state legislature, has Michigan locked down through June 12th. Her self-declared state of emergency for Michigan got pushed back to June 19th, according to WBCK.  People in Michigan have decided to disobey her and begin to live their lives again.

Pretty much every shop on South Haven's Phoenix Avenue is open for business. One owner tells me they all decided together to open. Consensus was risk of blow back for violating executive order worth keeping businesses alive. @wwmtnews pic.twitter.com/aKqG7SNPGe

As she extended the lockdowns, the Centers for Disease Control and Prevention announced that the mortality rate of COVID-19 is no worse than the flu. Politicians seem upset that regular people are beginning to put 2 and 2 together to come up with 4 all on their own.

Residents of South Haven have finally had enough.  And they are not alone.

People all over this country are figuring out that they don’t need the government, it needs them.  As this becomes widely known, more people will be willing to stand up and look their master in the eye as they break their own chains.

For those who think it’s “wrong” to disobey a politician or police officer, consider this: are they not just humans like you and me? What gives them the right to take away your rights? How many votes are required to enslave you? Why are they considered more equal than the rest of us?

It’s past time to permanently abolish the last form of slavery and wipe it off the globe.  Humans were not meant to be ruled or governed. Humans are not the property of the state. Humans are not tax cattle to be used and abused from cradle to grave. Humans are free. Humans are sovereign. Humans own themselves.