Steve Bannon: You’re a Nut Case If You Believe in the Deep State 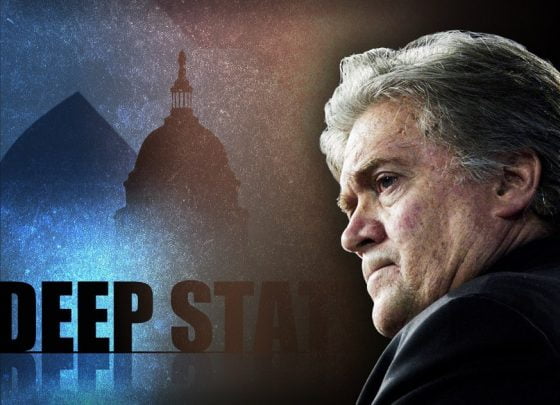 There isn’t a state within a state—popularized as the term Deep State—and if you believe this, you’re a nut case according to Steve Bannon. It’s simply a big bureaucracy, and it’s right out there in the open for all to see, according to Trump’s former White House strategist.

If that were indeed the case, you’d be able to stroll into a Bilderberg meeting or one organized by the Council on Foreign Relations or the Trilateral Commission. These guys decide your destiny in private, behind closed doors guarded by police and security details.

Bannon is considered one of the shining lights of the so-called Alt-right, the “New Right,” the “Dissident Right,” whatever. His inability or unwillingness to admit the obvious reveals something—he is a sellout and has always been a sellout.

Bannon is a member of the “dissident” establishment squaring off loudly against the “resistance” establishment—two factions of the same beast engaged in divisive, often scripted theatrics—and the time has arrived to let go of the well-documented fact a financial elite, hereditary aristocracy, and transnational corporations control governments around the world.

See, if you want to be “the infrastructure, globally, for the global populist movement,” you will have to make compromises, the same or similar compromises made by any other politician.

Steve is a former Goldman Sachs banker, so he has a good idea of how the system works. He once admitted an affinity for Vladimir Lenin.

“Lenin,” he answered, “wanted to destroy the state, and that’s my goal too. I want to bring everything crashing down, and destroy all of today’s establishment.” Bannon was employing Lenin’s strategy for Tea Party populist goals. He included in that group the Republican and Democratic Parties, as well as the traditional conservative press.

Except he really doesn’t want to control the state—he wants to own it, or pretend to own it, a wish that will never be, even though he agrees with the ruling elite there is no such thing as a deep state and those who believe in “conspiracy theories” have lost their marbles.

Bannon later denied his populism is based on the ideology of revolutionary communism that ultimately resulted in the murder of tens of millions of people.

As for the Tea Party, it did not begin as a populist group. It came together to oppose the financial elite that Bannon insists are not in control of the state.

The movement commonly referred to as the tea party arose in opposition to the 2008 bank bailouts. The tea party grew as its focus shifted to opposition to President Obama’s policies, particularly his stimulus spending bill, cap-and-trade legislation, and, of course, the health care plan tea party leaders successfully branded as Obamacare. In its early days, the tea party was equally opposed to big spenders in both parties. In fact, it was often harder on Republicans than on Democrats. Tea party groups even backed primary challengers to Republican incumbents.

Paul writes that the GOP subverted the original Tea Party. It now operates as a cheerleading section for establishment Republicans like Marco Rubio and Ted Cruz.

Not unlike Stalinist historical revisionism, the supposed Tea Party Republicans airbrushed out the original tea party historiography and replaced it with interventionist policies—statist interventions both abroad and at home—and the original Tea Party was denigrated as a gaggle of blue-sky isolationists and worse, libertarians.

Bannon now agrees with his erstwhile foes—the deep state and what Peter Dale Scott (who coined the term) calls “parapolitics,” go no deeper than the establishment parties (essentially a single party) and the entrenched bureaucracy of the state.

Time spent at Harvard, the military, Breitbart, and Goldman Sachs forged Bannon’s populist ideology, therefore it makes sense he does not see a government within a government and dismisses it as a Turkish or Egyptian thing, an impossibility in America.

In this regard, he agrees with the establishment Democrats, said to be his dire enemies and destroyers of western civilization and the belief in God. Bannon is in total denial of the fact a mega-wealthy financial elite and its internationalist corporate partners are destroying what was once upon a time a republic.