Standstill: The Charts That Prove The Global Economy Is In Serious Trouble

Amid growing concern that the global economy is teetering on the edge of a total collapse, governments in Europe, China and the United States continue to manipulate statistics in an effort to paint a picture of recovery and a return to normalcy.

But despite their best efforts to fabricate positive employment numbers, GDP growth, currency stability and stock market health, the stark reality is that the global economy is at a standstill, and has been since before the crash of 2008.

Economic growth is measured by how much we produce and consume, and before the bursting of the bubble there was an unprecedented level of consumption in America and throughout the rest of the world. But when credit markets and lending froze in response to a loss of confidence in the financial system following the collapse of investment giants Bear Stearns and Merrill Lynch, the economy as we had come to know it fell apart.

Consumption fell off a cliff and left America in its deepest recessionary environment since the 1930’s.

For those paying attention to the Baltic Dry Index, a global measure of the costs to transport raw materials, this collapse was reflected several months before panic gripped investors and led to stock market crashes around the world.

Introduced in 1985, the Baltic Dry Index first and foremost is a measure of the global shipping rates of dry bulk goods, mostly consisting of vital raw materials used in the creation of other products.  However, it is also a measure of demand for said materials in comparison to previous months and years.

In essence, the price of transporting goods collapsed – to its lowest levels ever. That old theory of supply and demand was the culprit. You see, when there is no money to buy goods, there is no demand for said goods. This puts pressure on transportation companies who make a living moving products from port to port around the world. But because no one was able to consume, there was no need to ship anything. This forced transportation companies to reduce their freight rates in an effort to stay competitive.

As the chart above demonstrates, there was a massive drop-off in prices during the summer of 2008, at right about the time Americans were getting wind a recession was looming. There was a slight bounce in response to the multi-trillion dollar bailouts promised by Congress and Presidents Bush and Obama, but the bubble created on cheap borrowing and negligent lending couldn’t be blown back up.

Four years on, with literally tens of trillions of dollars infused into the system by central banks all over the world, transportation rates for goods remain at near all time lows, suggesting that our governments’ best efforts have failed miserably.

And rather than the economic improvement touted by the best and brightest of our politicians, economists and financial gurus, we are nowhere near where we were before the crash.

In fact, it’s getting worse, as evidenced by the latest Baltic Dry Index report, which this morning experienced its biggest single day drop since 2008:

It has been a while since we looked at the Baltic Dry Index, which when normalizing for the excess glut in dry container ship supply (such as right now – 5 years after all the excess supply in the industry – has long been normalized), continues to be one of the best concurrent indicators of global shipping and trade. We look at it today, moments ago it just posted an epic 8.2% plunge, crashing from 900 to 826, or the biggest drop since 2008! Of course, conisdering the collapse in global trade confirmed in past days by both Chinese and US data, this should not come as a surprise, although we are certain it will merely bring out the BDIY apologists who tell us that supply and demand here (like in every other Fed-supported market) are completely uncorrelated. 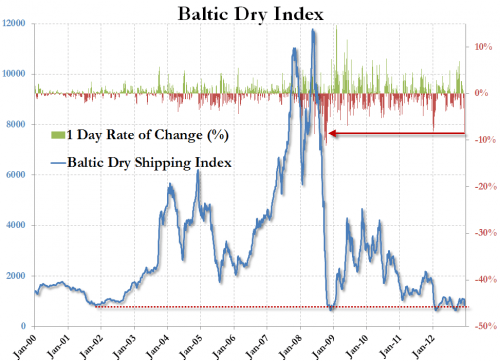 The bottom line is that American consumers are broke (and hungry). But not only are we broke, we owe more than we can ever hope to make to pay back the loans we took on during ‘the boom times.’

The notion that we are somehow in an economic recovery while 100 million Americas are classified as poor, with hundreds of thousands entering poverty on a monthly basis is ridiculous on its face.

We are in serious trouble folks.

Had you asked Americans in the Spring of 2008 if they were ready for the coming real estate bubble collapse and stock market crash that would see 40% of their wealth wiped out they would have laughed in your face.

They’ll laugh in your face today, too, should you tell them things are only going to get worse. But the numbers don’t lie.

We are in what many have referred to as America’s next great depression.

Laugh if you want, but reality will soon take that smile right off your face.