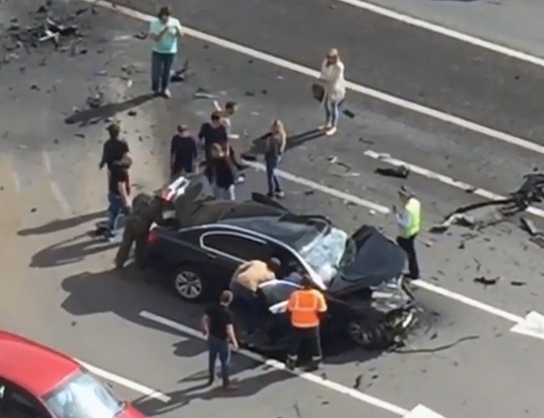 Update: Curtis in the comments below pointed to this stunning admission by Mike Morrell, former acting director of the CIA, and long time Deputy Director at CIA. He is extremely close to Hillary via their mutual ties to Beacon Global Strategies LLC, the regime change firm Morrell went to after leaving the CIA, which is engaged in antagonizing our enemies.

Only a month ago, Morrell stunningly stated openly on television that he wanted to target the leadership of Russia, Iran and Assad in Syria. Morrell explicitly advocated taking out guards, top staff, top generals, etc. etc. of these leaders – not trying to assassinating the head of state, but destroying the trusted people around them… and the killing of Putin’s “favorite” chauffeur appears to be exactly in the plans stated so carefully.

This video is a must see – these underhanded tactics are exactly what is going on, and are likely to drag us into an all-out world war against these three nations… and quite possibly China as well.

Someone had to know it was coming.

The issue of cars being hacked should be in full view by now. Newer cars are hooked up to the Internet, and like every other connected device, they can be hacked. A couple of white hats demonstrated that they can take over a car, and the results are dangerous and terrifying.

Maybe no one would bother hacking some average shmo, but it is certainly plausible that someone would go to such lengths in an attempt on a VIP, head of state or top oil executive. Quite possibly journalists as well.

With that in mind, take a look at this footage of the deadly accident that reportedly killed Vladimir Putin’s “favorite” chauffeur during a horrible crash in Moscow. As the London Independent reports:

Vladimir Putin’s personal chauffeur has been killed in Moscow after the presidential BMW collided head-on with a Mercedes.

The Russian President was not in the car at the time.

The driver, named only as MK, was said to be Mr Putin’s favourite chauffeur and had 40 years of experience as an official driver.

It was captured on two angles, and first shows the approach of the other car (NOT Putin’s man; driver not identified) as it moves into the center lane, speeds up dramatically, then veers off into the lane of oncoming traffic – colliding head on with the car being driven by Putin’s driver (“MK”). Towards the end of the video, it shows the opposite angle with the state vehicle approaching.

Vladimir Putin Presidential Chauffeur Killed In Crash. You can see exactly how the “accident” occurred

Of course, we can only speculate on what really happened here, but it is eerie that this seemingly targeted collision took out an official presidential car, apparently a BMW 7-Series car, which was registered with the Federation Council. As the Independent notes:

The BMW 7-Series was the official property of the Federation Council, also known as the Upper Chamber of Parliament or Russian Senate.

Mr Putin is scheduled to receive the first Russian-built “Kortezh” luxury limousine next year. Unlike “The Beast”, US President Barack Obama’s armour-plated vehicle, “Kortezh” will be on sale to the public as well.

It seems like Putin’s new fleet of vehicles can’t come quickly enough. His resurgence of activity in Syria and the Ukraine has undoubtedly pissed off NATO and driven the covert private contractors and NGO assets over the edge.

Someone is sending Putin a message. Putin should consider himself put on notice.

Perhaps it was even a hired-hit man suicide driver, but the video appears to show a car with an improbable sharp-yet-even acceleration and ‘loss of control’ that (speculatively) looks more like remote control than kamikaze.

That much is up for debate.

The nothing-to-hide crowd would prefer to take refuge in the idea that the view of remotely hijacked cars is a paranoid thought that shouldn’t be taken into consideration in car crashes – which are after all, routine, everyday occurrences. But those who are still living in reality can recognize that not only is this technologically-feasible, but it is a workable option in cases of staged deaths and targeted “hits” – wrapped up in political intrigue and secrecy.