The Economist says that 2010 could be a year the sparks unrest in the Global Tinderbox:

“IF THE world appears to have escaped relatively unscathed by social unrest in 2009, despite suffering the worst recession since the 1930s, it might just prove the lull before the storm. Despite a tentative global recovery, for many people around the world economic and social conditions will continue to deteriorate in 2010. An estimated 60m people worldwide will lose their jobs. Poverty rates will continue to rise, with 200m people at risk of joining the ranks of those living on less than $2 a day. But poverty alone does not spark unrestâ€”exaggerated income inequalities, poor governance, lack of social provision and ethnic tensions are all elements of the brew that foments unrest.“ 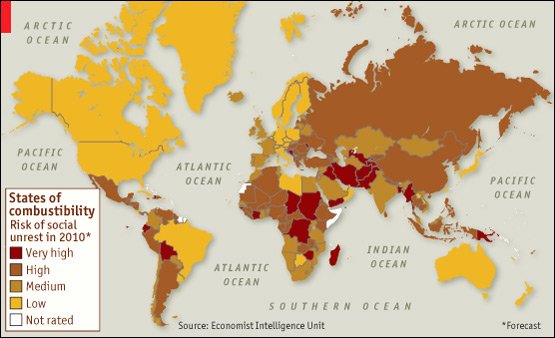 We are surprised to see Argentina in the high category, as there has been quite a bit of positive news on the stability of this country with lots of alternative investors, like Doug Casey, promoting real estate and agricultural investments.

Mexico, however, is a given, and should probably ranked in the very high category. This country is a disaster, as evidenced by the thousands of deaths on the northern border related to narcotics trafficking, gangs, and mafia. Couple that with a population that has no jobs, and is now losing revenue from family members in the US, and you can have a serious breakdown in social order. It would be no surprise if these local wars make their way across the border into Texas, New Mexico and Arizona.

We think the Very High rating for the Middle East is dead on. If World War III is going to break out, this is where it is going to start. With religious wars spanning millennia , and resourcesÂ  underground being drastically reduced through increased consumption around the world, it’s no wonder that this part of the globe is what one could deem a current SHTF scenario, and it’s only going to get worse.

It is also interesting that The Economist rated China as “High” risk, what with all the positive news about the new capitalist leanings and increased freedoms for their people. Here at SHTF Plan, we don’t doubt this rating one bit, considering the fact that all the hooplah about China being “decoupled” from the US economy and being the engine that’s driving the world, is just that, hooplah. Any economic problems in the USA are going to have a direct and immediate impact on China. End of story. That being said, if the mainstream is so incompetent as to see this relationship, I don’t think their competency can be trusted about understanding capitalism and how it functions in a politically communist system.

We do wonder about the USA. For the most part, things seem stable now, and save a few days of tea parties in 2009, nothing seems to be brewing. Though many have lost their jobs, the poverty levels have not increased significantly, at least not significantly enough to drive millions of people into the streets across major cities in the entire country. However, poverty, as opined by The Econmist, is only part of the combustibility equation, so we must consider the other aspects noted in the article:

The Economist focuses on the risks of social unrest in 2010. While the above points may be on the back burner for now, they are slowly simmering. Serious civil unrest, the kind that might warrant a Medium or High risk rating, does not seem to be likely this year. Though, this may be argued by a number of other forecasters who see this as a distinct possibility for 2010.

Rather than making a forecast that predicts that we will either have civil unrest or we won’t, we’ll try to make our views as vague as possible, so that a year from now we can say we were right no matter what happens: Maybe social unrest in America on massive scales is not probable, but it is certainly within the realm of possibility. We hope that makes everyone feel better about it all.