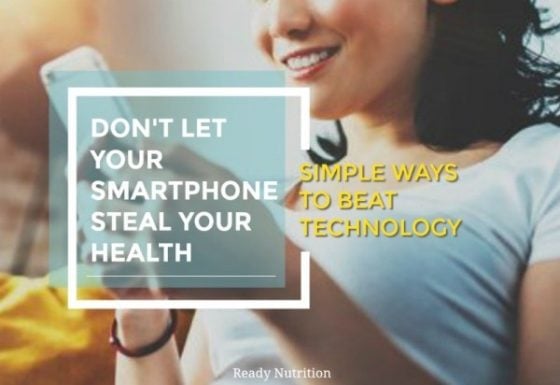 This article was originally published by Sara Tipton at Ready Nutrition.

We live in the golden age of technology, whether we want to or not.  And because of the need or desire to have a smartphone and keep it on your person at all times, there are things we can to that will boost our “technology health.”

In 2018, 95% of Americans said they owned a cellphone of some kind while a whopping 77% of Americans said they owned a smartphone.  That’s up from just 35% in Pew Research Center’s first survey of smartphone ownership conducted in 2011. Smartphones are used for everything anymore.  They have become our maps and weather sources.  They are a reprieve from our daily lives and a way to stay connected in a world that is both increasingly interconnected and distant at the same time.

But because of this phenomena, our phones can also have an impact on our health and it is rarely for the better. Infectious germs, poor eyesight, eye strain, and muscle strains can all be some of the negative side effects of using a phone for a long period of time.  Often, a complete technology detox is what is needed. But when that won’t due, try these tips for help with common technology health problems

If you find yourself staring at your phone for long periods of time, try to take breaks every 20 or 30 minutes.  This will relieve the neck and shoulder muscles working hard to keep your head bent down. Consider rubbing your own muscles to relieve the tension and stretch out for a few minutes before returning to your phone. Muscle strain can lead to knots and spasms, as well as nerve pain that radiates down the back.  Take caution to keep your head up to provide minimal straining on the neck if you must look at your phone for a long time.  Some people are fine using their phone for hours on end, while others will definitely need to take breaks and soothe their sore muscles.

Nasty germs lurk on the surface of smartphones. Most people don’t do anything to clean those infectious organisms off of their screen either! In fact, one study showed that smartphone screens harbor three times more germs than a toilet seat. Yikes! Researchers swabbed different phones to test for aerobic bacteria, yeast an, mold. The findings of the study showed that all areas of the smartphone” harbor at least some quantity of each type of organism.” E. coli was even found on some phones!

More than a third of people (35 %) have never cleaned their smartphones with wipes, a cleaning fluid or a similar product, according to the study done by Insurance2Go, a gadget insurance provider based in Portsmouth, England. Take the time to wipe off your smartphone now!  I know I did as soon as I had written this! With superbugs on the rise, it just makes sense.

Staring at any screen can strain the eyes and lead to poor vision. Scientists and doctors say that blue light is so dangerous because the lens and cornea of the eye cannot block it. Shorter wavelength blue light that is emitted by smartphones, lights, and computer, tablet, and TV screens causes damaging health effects. Exposure to this wavelength of light disrupts circadian rhythms and exposure to blue light after the sun goes down interferes with sleep.  Try wearing blue light glasses if you have to look at your phone (or if you work on a computer for long hours during the day).  I personally picked up some cheap blue light glasses on Amazon because staring at a computer screen for 9+ hours a day was heavily straining my eyes. These ones are inexpensive, yet offer protection from the dangers of the blue light.

Eyesight itself can be damaged too if you look at your smartphone long enough. This is also the fault of the blue light.  It is also one more good reason to protect your eyes with blue light glasses. According to the New York Post, researchers at the University of Toledo, in Ohio, have found that exposure to blue-light promotes the growth of “poisonous molecules” in your eyes, leading to macular degeneration. “It’s no secret that blue light harms our vision by damaging the eye’s retina,” professor and study co-author Ajith Karunarathne said about the study, which was published in the journal Scientific Reports.

I can’t even begin to describe how many times I’ve seen a person driving while typing away on their phone.

Some are in their own lane, while others are completely oblivious to the world around them as they travel at 55 mph down the highway. Texting while driving distracts you from what’s happening on the road and takes your eyes away from what you should be paying attention to. Texting while driving could actually hurt someone else too! It only takes a few seconds of inattention to lead to an accident. In 2015, nearly 3,500 people were killed and approximately 391,000 people were injured in car accidents involving distracted drivers.

Put the phone in your purse and put the purse under your seat or even under the back seat out of your reach. Turn off the sound before getting in your car, or simply shut it off if you are one of those who can be tempted to check your email while behind the wheel of a moving vehicle. Making the phone difficult to get to will help prevent you from being distracted by it, and if you can’t hear it, you will have less of a desire to reach for it.  If you like to listen to the music on your phone while you drive, make sure your playlist is set up before you put the car in gear, and then turn off all notifications.  Limiting your distractions is just one way to keep yourself focused on the task of arriving safely to your destination.  Your family and friends will thank you!

While it seems like not much can be done to limit the use of smartphones, things can be done to mitigate the negative health effects of their use. Let us know your techniques for not allowing your smartphone and other technology to steal your health!