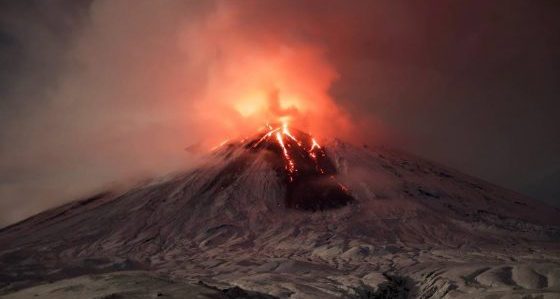 A Siberian super-volcano is worrying scientists after it’s shocking and sudden eruption flung hot ash six miles into the sky. This volcano is one of the most active in Russia.

Scientists working at the geophysical department of the Russian Academy of Science in north-eastern Russia’s Kamchatka Krai region have confirmed the giant eruption took place at the site of the Shiveluch Volcano yesterday over a 20 minute period.  They also verified and saw the volcano spew piping hot ash 10 kilometers (6 miles) into the sky.  So far, no locals or villages have been affected by this volcano’s eruption, but it’s sparking fears that a larger and more powerful explosion could occur in the very near future.

This eruption comes just days after Mount Agung in Bali in Indonesia began erupting, causing thousands to flee.  The head of the volcano station, Yuri Demyanchuk, said the eruption was powerful.  “It was a powerful outburst, although it wasn’t accompanied by pyroclastic flows. There was much lightning in the ash column,” according to Demyanchuk.

The volcano began forming about 60,000 to 70,000 years ago. Before this explosion, the most recent eruption was in February of 2015 when ash was shot around 30,000 feet into the air crossing the Bering Sea and into Alaska.

Volcanologists have been monitoring this and the Bali eruption closely for signs of an impending and more violent explosion. Siberian volcanic eruptions are thought to have caused the Permian mass extinction about 250 million years ago, which prompts scientists to study any volatility closely.

The instability around many of Earth’s volcanoes is putting researchers on edge. While most say we shouldn’t be concerned about a super volcano such as the Yellowstone caldera erupting, we are seeing an increasing number of earthquakes and volcanic activity as we inch toward 2018. Could the Earth be sending us warning signs?