Showdown: A Bull And A Bear Duke It Out: Will Silver And Gold Skyrocket… Or Collapse? 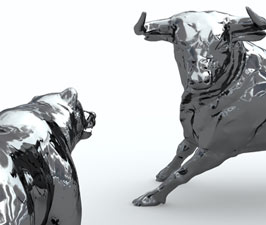 The world is in crisis. That’s something most analysts, investors and average Americans can agree on. How markets will behave, what the dollar will do and where capital will flow as investors panic, however, is another matter altogether. Throughout history silver and gold have been used as the wealth preservation assets of last resort and that’s why, according to precious metals bull Gary Christenson of Deviant Investor, we should expect precious metals to rise to new highs in coming years. But bear David Trungale of Trader Tours disagrees, noting that while monetary printing may be excessive, there has been no significant increase in inflation, which points to continued deflationary pressure on silver and gold.

Trungale: I’m not denying that inflation has not existed… It has… I’m talking about an annual basis relative to 2011, inflation has been falling… I don’t care if you use the government CPI or John Williams’ Shadowstats numbers… the fact remains the inflation rate has been coming down. So I consider this, still, a rally [in silver] in a long-term bear market… Money printing does not create inflation within itself.. It’s those dollars actually going into the economy and being spent on consumer goods and services… that’s inflation… The fact remains, I think the longer-term threat is deflation, not hyperinflation.

Precious metals and broader market investors looking for insights into how silver and gold are behaving technically, fundamentally and what to expect in coming years should watch the full interview from Future Money Trends:

Of note is that David Trungale is a day-to-day trader and technical analyst, so his perspectives are often short-term and based on technical trading data. Gary Christenson, however, is a long-term trend analyst who, while being a technician himself, prefers to look at historical movements, the reasons behind them and how this knowledge can be applied to future market reactions.

Thus, while both may be looking at very similar data and agree on many points – namely that debt is rising precipitously – their unique analysis and assessment yields markedly different outcomes.

Trungale: If you look at silver after the 1980 collapse it consolidated at the single digit price range at about $4 or $5 an ounce and it sat there for 25 years… I’m not saying the exact same thing is going to happen… I’m just looking at things from a technical level… and after things fall from the high point [2011] it’s always going to be difficult to recover… that doesn’t mean there aren’t short-term opportunities… there obviously was in the GDX and various miners, as well as gold and silver. But again, I don’t consider this a screaming buy… and I don’t think that the mining sector or commodity markets are going to skyrocket back to the 2011 levels.

Christenson: I respect David and what I consider his intelligent analysis, but I disagree with it substantially. I think the mining shares are going to go much higher and I think they are going to do crazy things that people don’t believe in terms of going up… Yes, 2011 was a huge up move in the price of silver… But if you go back and look at it historically in terms of standard deviations off the trend, ratios to national debt and other kinds of things, it was just a little blip. The 1980 blip on silver was a huge, major, catastrophic generational move and that’s why things took 25 years to recupe. I see silver from 1980 to 2001… to consolidate and start to build a new base… I think 2011 wasn’t nearly the price spike 1980 was… I think we should have, five years from now, silver going up… and gold and silver mining shares will be the same thing but multiples higher.

But to get specific, here’s where the Bull and the Bear think silver will be by the end of 2016:

Trungale: Silver and gold will probably be at the same level they are now. Silver at maybe $17, maybe $15… it will probably consolidate.

And there you have it – two completely different perspectives based on very similar technical analysis and market conditions.

While David Trungale notes that his analysis is short-term and subject to change as events play out, it is quite possible that silver and gold either hold at current levels or potentially go a bit lower.

Yet, the long-term global forecast suggests major crises loom in financial markets, economic growth and the monetary system as a whole. If Gary Christenson is right, that could lead to investor panic, a potential loss in the dollar’s reserve currency status, and exponential price increases, especially in the precious metal space if and when people lose confidence.

Was the 2011 silver high of nearly $50 the top? Or will we see another “huge, major, catastrophic generational move” to highs that most people don’t believe are even possible?