Shooting Wisdom From a Pro: “I Carry a Gun ‘Cause a Cop Is Too Heavy” 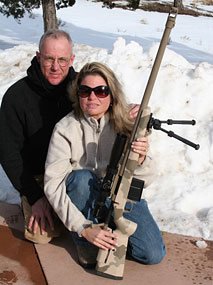 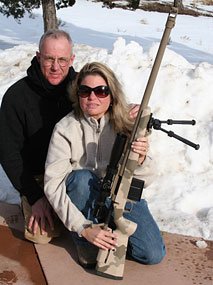 Clint Smith served two tours in Vietnam, worked as a police officer, was a member of SWAT, directed training at leading gun manufacturing firms, is an instructor of advanced weapons and tactics, and now runs Thunder Ranch, a facility in Oregon designed specifically for avid gun shooters. If you want to learn how to fire a gun and what to do in life and death situations Mr. Smith is the person you’d want as an instructor. (He’s pictured next to his wife to the left, along with Mrs. Smith’s 338 Laupa)

Over the years he’s has passed on scores of insights and words of wisdom, some via numerous instructional videos. Here are some of his key thoughts on guns, gun ownership, and life in general assembled from across the web:

Don’t forget, incoming fire has the right of way.

If you carry a gun, people will call you paranoid. That’s ridiculous. If I have a gun, what in the hell do I have to be paranoid about.

Make your attacker advance through a wall of bullets. I may get killed with my own gun, but he’s gonna have to beat me to death with it, cause it’s going to be empty.

The only purpose of fighting is to Win!

When you reload in low light encounters, don’t put your flashlight in your back pocket… If you light yourself up, you’ll look like an angel or the tooth fairy…and you’re gonna be one of ’em pretty soon.

The handgun would not be my choice of weapon if I knew I was going to a fight I’d choose a rifle, a shotgun, an RPG or an atomic bomb instead.

Nothing adds a little class to a sniper course like a babe in a Ghillie suit.

You have the rest of your life to solve your problems. How long you live depends on how well you do it.

You cannot save the planet.. You may be able to save yourself and your family.

There is no possible victory in defense.

The final weapon is the brain. All else is supplemental.

Don’t pick a fight with an old man. If he is too old to fight, he’ll just kill you.

If you find yourself in a fair fight, your tactics suck.

I carry a gun cause a cop is too heavy.

When seconds count, the cops are just minutes away.

The old sheriff was attending an awards dinner when a lady commented on his wearing his sidearm. ‘Sheriff, I see you have your pistol. Are you expecting trouble?’ ‘No ma’am. If I were expecting trouble, I would have brought my rifle.’

Beware the man who only has one gun. He probably knows how to use it!

You can say ‘stop’ or ‘alto’ or use any other word you think will work but I’ve found that a large bore muzzle pointed at someone’s head is pretty much the universal language.