Shocking! Judge Tazes Man in Court Because He “Continued To Speak When Ordered To Stop” 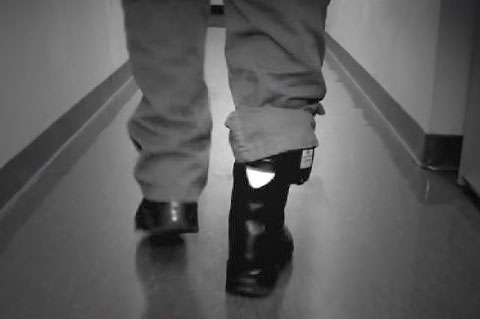 The punishments being handed out by courtrooms are starting to look a lot like behaviorists testing rats once imagined – with a crude shocking device designed to reinforce behavior.

In this absurd and Orwellian case, a judge played jury and executioner after he ordered a defendent, who was representing himself, to be shocked through an ankle bracelet attached to him during the trial – all because he did not stop talking when he was supposed to.

The man apparently went on too long with his passionate defense plea. When the judge had enough, he got zapped.

A man representing himself in a Maryland court was shocked with 50,000 volts of electricity by the judge because he continued to speak when the judge ordered him to stop.

Judge Robert Nalley pleaded guilty on Monday to depriving the defendant of his civil rights.

The charge stems from an encounter between the judge and victim Delvon King in July of 2014, when King was appearing before Judge Nalley to face gun charges. King had a shocker anklet attached to him, which was supposed to be used in case of an emergency situation, or if King were to attempt to escape or hurt anyone.

In the court, King attempted to make his case but was constantly interrupted by the judge who repeatedly told him to be quiet. When King continued to make his case to the court, Judge Nalley told the court deputy “Mr Sheriff, do it… use it,” at which point 50,000 volts of electricity were sent through King’s body, causing him to scream in pain. The court transcript read, “DEFENDANT SCREAMS.”

King later described the situation to reporters, saying that he experienced “Excruciating pain then, and a burning sensation.”

“It burned the rest of the day. Messed me up mentally. I don’t really remember that part. Just next think I know, I’m on the ground,” King added.

How eerie that this era of lawless courts including live torture in the courtroom, and the court stenographer continues on, recording words to approximate the sound of screams and agony.

Judge Nalley may get something like a year of probation, but is unlikely to have a meaningful punishment.

Meanwhile, the precedent is set for an out-and-out violation of civil rights.

Before he was even convicted, this man had his speech silenced, his defense suspended, and instead got “cruel and unusual punishment” – violating his Eighth Amendment – right there on the spot.

And just in case you think this is only for people who have done something wrong – this guy was literally in the process of trying to defend his case – please keep in mind that Homeland Security has pushed for taser bracelets that all airline passengers would wear for “security” purposes.

The Washington Times reported on a device that can “shock the wearer on command, completely immobilizing him/her for several minutes”:

The Electronic ID Bracelet, as it’s referred to, would be worn by every traveler “until they disembark the flight at their destination.” Yes, you read that correctly. Every airline passenger would be tracked by a government-funded GPS, containing personal, private and confidential information, and would shock the customer worse than an electronic dog collar if the passenger got out of line.

Clearly the Electronic ID Bracelet is a euphemism for the EMD Safety Bracelet, or at least it has a nefarious hidden ability (thus the term ID Bracelet is ambiguous at best). EMD stands for Electro-Musclar Disruption. Again, according to the promotional video, the bracelet can completely immobilize the wearer for several minutes.

Seriously, that is a police state gone too far.

It hasn’t happened yet, but it shows their thinking and where they plan to go in the not so distant future.