Shocking Celebrations From The Left After Congressional Assassination Attempt: “I Have No Pity… Should Have Been Trump’s Dumb Ass To Get Popped” 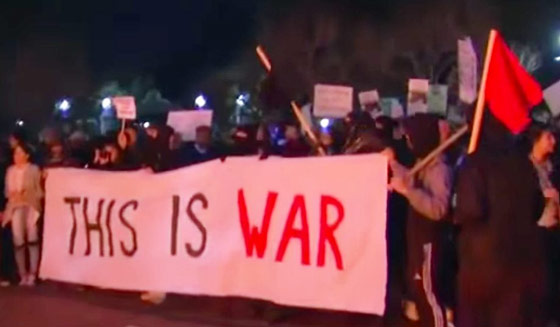 As we’ve reported previously, those on the left have gotten ever more violent. With open displays of beheading and murdering the President to Antifa groups preparing for war by stocking up on weapons and training, it was only a matter of time before things took a turn for the worse.

Today is that day.

A gunman identified as a Bernie Sanders supporter and socialist reportedly targeting Republican members of Congress opened fire with as many as 50-60 shots at a D.C. baseball field wounding at least four people, including House Majority Whip Steve Scalise.

Had it not been for Scalise’s security detail, says Senator Rand Paul, it would have been a massacre.

And a massacre is exactly what many on the left wanted to see today, as evidenced by the literal thousands of comments pouring in to social media sites and commenting forums.

We wonder… where could the shooter have possibly gotten the idea to go on a shooting rampage?

President Trump has tweeted that Rep. Scalise will make a full recovery:

Rep. Steve Scalise of Louisiana, a true friend and patriot, was badly injured but will fully recover. Our thoughts and prayers are with him.

And the left immediately pounced, laying blame for the shooting on President Trump, the NRA and Republicans’ attempts to reform health care.

They quickly began celebrating their victory and railing about gun control. The following comments are just a small sampling of the rejoicing on the left and were sourced via ultra-left leaning site Huffington Post: 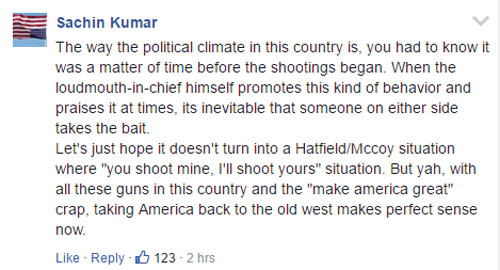 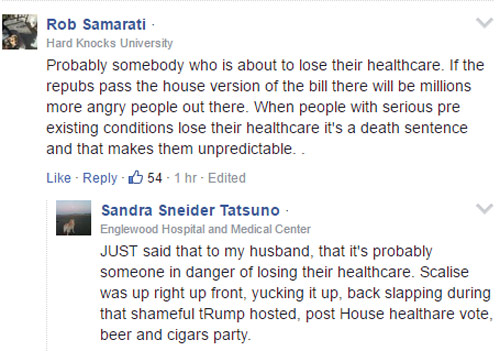 If the shooter has a serious health condition then is taking potshots at the GOP house leadership considered self defense?

Luckily, more sensible people responded to the vitriol and total disconnection of those on the left from reality:

Fake news @CNN thinks the gun woke up this morning and decided to fire at people all by itself. #SteveScalise pic.twitter.com/WuFQUNRpK9

You along with the rest of #MSM has blood on your hands. Your reporting of #FAKENEWS and anti Trump rhetoric are responsible.

This is the fake media fault for demonizing our President.

And a final warning:

It’s only the beginning. When their media applauds this aggression towards fellow Americans. There is no winner. Only a loser: America. pic.twitter.com/NQEPfnkbbl

Related: There Will Be Blood: Left Prepares For War After Berkeley Beat Down: “Combat Training, Better Equipment, Guns…”