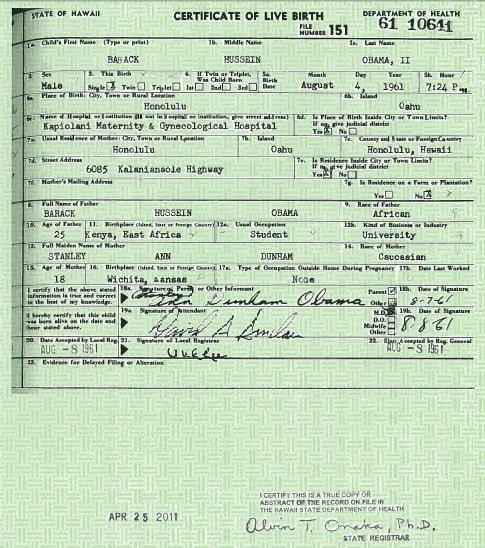 The conversation about Barack Obama’s birth certificate has been off the table for a while now – but the true heart of the matter has never been resolved.

Has anything in his administration been valid or legal? Oddly enough, it seems that a clever legal strategy may make the question of a forged document somehow irrelevant to Obama’s eligibility to hold office.

Coincidentally or not, it was none other than President-elect Donald Trump who, arguably, called off the hounds, got the Obama Admin to produce a document, and then called the whole thing square in the lead up to 2012.

More recently, Trump dismissed his previous ties to the “birther movement” during the last few weeks of his presidential campaign, brushing off the topic very hurriedly by stating: “President Barack Obama was born in the United States, period.”

However, the question isn’t settled for investigators who have been conducting a five-year probe of the birth certificate they claim is a forgery – complete with photoshop layers!

A years-long forensics investigation into the computer image of the long-form Hawaiian birth certificate image that Barack Obama released during a White House news conference during his first term and presented to the American people as an official government document concluded it is “fake.”

“The inescapable conclusion is that the Hawaii Department of Health has not shown the American public the original 1961 birth records for Barack Obama, if they actually exist,” he said.

Clearly, the mainstream media will continue to cast doubt and ridicule on these claims.

But it isn’t for lack of substance, but for fear that these dangerous issues could be raised. A Republican controlled Congress, however, could revive the issue again. That much remains to be seen.

So what does it all mean? According to Jerome Corsi, WND writer and author of [amazon text=Where’s the Birth Certificate?&asin=1936488299]:

“That President Obama’s birth certificate is fake, as proven now by a legitimate law enforcement examination raises serious questions that high crimes and misdemeanors have been committed at the highest level of government. The clear conclusion is that the Obama presidency may have been illegitimate, having violated Article 2, Section 1 of the Constitution. Impeachment procedures may be required, even if those procedures are conducted after Obama leaves office.”

“I plan on turning over this investigation this month to the federal government. And Congress. And hope Congress No. 1 will pass a law, the president should be vetted. Common sense.

Meanwhile, the powers that be are claiming that the Arpaio posse investigation doesn’t matter.

What makes these matters even more interesting is that Obama lawyers have apparently admitted that the document is a fake – and went so far as to argue that the fake document, therefore, was not sufficient to disprove Obama’s eligibility for the highest office.

Back in 2012, Dan Crosby wrote about the bizarre case being made in New Jersey over whether or not Obama qualified for the 2012 ballot:

After a Maricopa County law enforcement agency conducted a six-month forensic examination … arguments from an Obama eligibility lawyer during a recent New Jersey ballot challenge hearing reveals the image was not only a fabrication, but that it was likely part of a contrived plot by counterfeiters to endow Obama with mere political support while simultaneously making the image intentionally appear absurd and, therefore, invalid as evidence toward proving Obama’s ineligibility in a court of law.

Taking an audacious and shocking angle against the constitutional eligibility mandate, Obama’s lawyer, Alexandra Hill, admitted that the image of Obama’s birth certificate was a forgery and made the absurd claim that, therefore, it cannot be used as evidence to confirm his lack of natural born citizenship status. Therefore, she argued, it is “irrelevant to his placement on the ballot”.

Hill went on to contort reasoning by implying that Obama needs only invoke his political popularity, not legal qualifications, in order to be a candidate.

“Sadly, regardless of her moral deficiency, Hill is legally justified,” says TDP Editor, Penbrook Johannson, “Obama’s eligibility is a separate matter than the charges of forgery and fraud. Of course, we have evidence that he is not eligible. But, evidence of forgery by as yet unidentified counterfeiters working on behalf of Obama is not what legally excludes Obama from appearing on a ballot, by itself, until some authority is willing to consider this as evidence of forgery on its merit as an indication of actual ineligibility in a court of legal authority.

These bizarre statements are actually on video… skip ahead to 34-40 minutes in this second part for many of the relevant statements about how the alleged forgery never was relevant to whether or not Obama appeared on the ballot in 2012 – though, in theory and in merit, it should have been.

In hindsight, there may have been a masterful strategy of evasion at work.

b) The Obama team (individuals not clearly identified) produced the document in question by leaking it to the press, and putting it online.

c) However, no birth certificate document was ever legally produced or turned in to anyone (including the State Dept.) in order to appear on the ballot, etc.

d) Therefore, legal questions concerning “forgery” of the document produced do not legally link up to anything about Obama’s candidacy or presidency

e) Any questions or criminal allegations are posed towards “as yet unknown” conspirators – meaning that, while the document may indeed be a proven forgery, no one is currently identified as having created the document. Unless Obama is personally implicated in creating and producing this document, it would have no bearing on his eligibility – in retrospect or otherwise. At this point, it isn’t even clear if a legitimate birth certificate exists for Obama, and if so, where it is located or being held.

f) Public perception is an entirely different beast. If it ever came to a head, the entire reign of Obama could be put into question. But luckily for the outgoing president, those making accusations and raising questions have been labeled and marginalized. Until the campaign of Donald Trump, the question had been largely dropped – even in many right wing circles.

Who can pin the tail on this donkey?

Born In Kenya: Fact or Fiction?