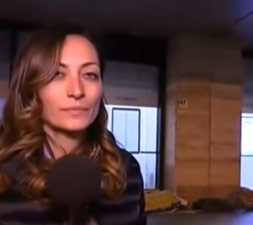 If you happen to be visiting Rome, Italy anytime soon (or pretty much any Western European country), then you may want to come prepared with pepper spray or other self defense tools, because as you’ll see in the video below, peaceful refugees looking to culturally enhance Europe aren’t always as friendly as you may think.

Italian television correspondent Francesca Parisella was doing a live broadcast about the plight of refugees at the central train station in Rome, when she and her camera crew were attacked by migrants who had sought shelter for the night.

Ms. Parisella was able to find safety with a Taxi driver who happened to be in the area, but the cameraman was not so lucky. According to reports, he was beaten and his camera destroyed:

Just as Nicola Porro connects at around 23.30, with his post at Rome Termini Station, to document the situation of the bivouacs that populate her at night, Francesca Parisella has the time to start the connection and then warn “we have assaulted “. The room swings, it is understood that the journalist and operator are fleeing, and the voice of the chronicler rises up to become a real scream of fear. A few minutes later, studio studio explains that “Francesca is upset but she is okay, they have destroyed the camera and hacked the operator.” One like that of this evening It should not be a reportage in the war zone. “Thanks to a taxi driver, if not It would be much worse. ” A version confirmed by Parisella himself, on the phone, shortly afterwards: “We were away to tell what kind of hospitality we can give, are bothered and attacked. They rushed me and taken to my jacket,” the reporter said.Watch:

Such scenes are now playing out regularly in once quiet, peaceful and crime free areas of Europe. While politicians and the mainstream media either downplays or completely ignores such reports, the fact is that the cultural enrichment being forecibly injected into Europe is leading to increased sexual attacks, violent assaults and large-scale terrorist attacks. In fact, it’s so scary for citizens of the countries accepting refugees that Germany actually sold out of pepper spray and Europeans have been scrambling to acquire self defense firearms.

While the common denominator is clearly the influx of immigrants from countries that are so culturally and religiously different from Europe that there is simply no way a peaceful assimilation is possible, anyone who dares mention the reality of the situation is branded a racist, a nationalist or a fear monger. In fact, in Germany, you can now be arrested and have your children taken from you by the government if you criticize refugees – that’s how bad it’s gotten.

One Angry Foreigner had enough and took to the airwaves to explain how mass migration has led to fear and crisis across Sweden:

t appears that all over the world, most notably in present-day Western Europe, immigrants from countries with completely different world views and legal perceptions are moving in and pushing their agendas on the natives, often with full support from their elected representatives and their media mouthpieces.

In an incredibly insightful opinion piece from an Angry Foreigner living in Sweden, we learn that it’s not just Americans who are fed up with the political correctness being forced upon the people by politicians, feminists, cultural groups, and immigrants themselves.

As you watch the video you’ll no doubt notice some key parallels between Europe and the United States. For all intents and purposes you could swap out the word “Swedes” for “Americans” and the points being made still ring true.

I have never come across a country where nationalism is one of the biggest taboos… to the point where it’s considered to be racism.

Because if you love your own country and your own culture the most then you don’t love other peoples’ as much and that’s not equal. That’s not progressive.

Watch: Steven Crowder Calls Bleeding Heart Progressive Liberals To Ask If They’ll Take In Refugees… The Results Are Just What You Might Expect