Shock Video: Police Execute Man With His Hands Up 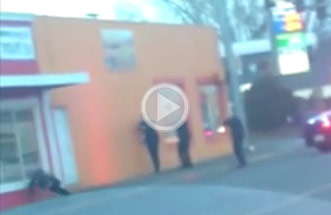 Editor’s Note: Was this police shooting justified? The man appears to have his hands up and doesn’t seem to be an immediate threat, but police say he picked up a rock at some point during the incident. Paul Joseph Watson of Infowars reports…

Shocking video shows a man being gunned down by police as he attempts to flee with his hands up. The man reportedly did not have a gun and merely picked up a rock during the incident.

The confrontation occurred last night at a busy intersection in Pasco, Washington after officers responded to reports of a disturbance at a nearby grocery store. The man reportedly threw a rock at a passing vehicle.

After a taser round failed to apprehend the individual, he fled across the street. Footage shows the man running away with his hands up. As he turns around to face the officers he is shot numerous times.

At least 13 gunshots were fired by the officers, who decided to shoot “after the man refused to listen to their commands,” according to Police Capt. Ken Roske. Apparently, refusal to instantly comply now mandates summary execution.

“All I saw was this poor guy was running from the cops and I saw him go down,” one witness said. “I saw the cops shooting at him. I didn’t see no gun. No reason. I just saw him go down.”

“I really thought they were just going walk up and tackle or tase him,” another witness said. “But they opened fire. His back was turned.”

Numerous eyewitnesses, including children, saw the incident unfold. After the man was shot, his dead body was handcuffed by police.

The officers will be placed on paid leave while police investigate the incident. The victim has not been named.