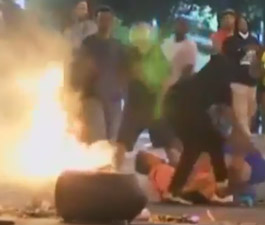 The protests in Charlotte, North Carolina are devolving into exactly what you might expect – total chaos and pandemonium.

From looting to hate-filled violent attacks, the situation continues to deteriorate.

In the following video we see a crowd gathered around a fire presumably started by the protesters. According to WCCB’s Twitter report, what we see next is just how far race relations have come under America’s first black President.

The photographer in question was white, raising the possibility he may have been targeted by for racial reasons by mostly-black rioters.

The photographer in this case was lucky that law enforcement officers were only a few yards away, otherwise it could have gone a whole lot worse, as it did for this white male who was begging for mercy as a mob of hoodlums beat him:

We’re not trying to foment racial division here, but had the situation been reversed and it were a white mob beating a black man senseless, would there be more outrage from the mainstream liberal media?