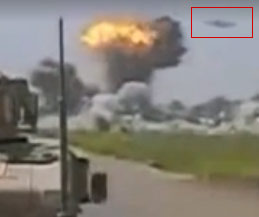 Update: The video posted below and sourced via the UK’s Mail Online, Huffington Post, The New York Daily News, and Drudge Report is apparently a hoax. We have chosen to keep it available for users who may still be interested in viewing it, reading the commentary and joining the community discussion. Our sincerest apologies for any confusion this may have caused. When numerous credible alternative media and mainstream sources carry a particular report or video we generally assume, wrongly in this case, that it is legitimate. Thank you to the readers who have commented and emailed about this report to advise us that it may not be representative of the events as they actually happened.

The following video footage reportedly taken in March by a U.S. Marine on the outskirts of a Taliban base in Afghanistan shows that the United States may have weapon systems that have heretofore never been seen by anyone outside of the compartmentalized development teams that built it. Either that or an extraterrestrial species has decided to get involved in the war on terror.

The video starts with a Marine recording what appears to be an unidentified aircraft hovering over the base, perhaps half a kilometer or so away. Within milliseconds of lights flashing from its underbelly a massive set of explosions rocks the base. After the smoke clears the video zooms in on the object, revealing a triangle shaped saucer-like aircraft often seen in science fiction movies.

According to Mail Online, the mysterious craft is unlike any known U.S. military drone or plane.

While we can’t rule out the possibility that the unidentified flying object is of extraterrestrial origin, the close proximity of US troops suggests someone may have called in an airstrike, and perhaps the chain of command wanted to test out some of the weapons systems the US has secretly developed at underground military bases like Area 51.

While it might seem crazy, watch the video (via Drudge Report) for yourself and decide if this is a standard military aircraft or if we’re dealing with an advanced (alien or human) technology:

The timing of the video release is interesting as well. Earlier this week we highlighted the possibility that Russian Strategic Bombers flying along the West Coast may have used advanced technology to take down the Los Angeles LAX airport flight control system causing hundreds of delays and cancellations. If this is in fact what happened, it may have been a show of force to Western powers that Russia has systems capable of striking at the electronic heart of America.

But, given the video footage captured above, Russia isn’t the only country in the world with advanced military technology.

Strategic relocation specialist Joel Skousen, in a documentary with Alex Jones, suggested that East would one day meet West in a nuclear war. He noted that the reasons for why Russia and China have hesitated thus far is because they are unfamiliar with the advanced weapons systems developed by the U.S. military and that they fear being wiped out by these new technologies.

With tensions flaring up around the world, especially in the eastern European region, the timing of this video suggests it may have been disseminated through news channels as a warning to other countries that the U.S. does, in fact, have systems so advanced they could render the assets of any foreign military useless.

Whether the aircraft captured in the video above is of human origin or not, one thing’s for sure: It will certainly have widespread implications on the modern-day battlefield.