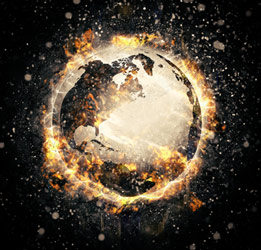 Editor’s Comment: There are always limits to a problem, and eventually things will crash, and could easily cause a disaster. But as people often comment, it is remarkable how far down the road the establishment powers can kick the can, and keep the charade going. But at some point, even those running the game reach a conclusion point where it is time to leave someone holding the bag while the others run away, regroup and enjoy the spoils of their efforts.

There is no real way of knowing if 2016 will be such a point on the timeline, but the frequent comments by investors like George Soros and institutions like Goldman Sachs and JP Morgan Chase that disaster is coming are ominous indeed.

20th Largest Bank In The World: 2016 Will Be A ‘Cataclysmic Year’ And ‘Investors Should Be Afraid’

The Royal Bank of Scotland is telling clients that 2016 is going to be a “cataclysmic year” and that they should “sell everything”.  This sounds like something that you might hear from The Economic Collapse Blog, but up until just recently you would have never expected to get this kind of message from one of the twenty largest banks on the entire planet.  Unfortunately, this is just another indication that a major global financial crisis has begun and that we are now entering a bear market.  The collective market value of companies listed on the S&P 500 has dropped by about a trillion dollars since the start of 2016, and panic is spreading like wildfire all over the globe.  And of course when the Royal Bank of Scotland comes out and openly says that “investors should be afraid” that certainly is not going to help matters.

It amazes me that the Royal Bank of Scotland is essentially saying the exact same thing that I have been saying for months.  Just like I have been telling my readers, RBS has observed that global markets “are flashing the same stress alerts as they did before the Lehman crisis in 2008″…

RBS has advised clients to brace for a “cataclysmic year” and a global deflationary crisis, warning that the major stock markets could fall by a fifth and oil may reach US$16 a barrel.

The bank’s credit team said markets are flashing the same stress alerts as they did before the Lehman crisis in 2008.

So what should our response be to these warning signs?

According to RBS, the logical thing to do is to “sell everything” excerpt for high quality bonds…

“Sell everything except high quality bonds,” warned Andrew Roberts in a note this week.

He said the bank’s red flags for 2016 — falling oil, volatility in China, shrinking world trade, rising debt, weak corporate loans and deflation — had all been seen in just the first week of trading.

“We think investors should be afraid,” he said.

And of course RBS is not the only big bank issuing these kinds of ominous warnings.

The biggest bank in America, J.P. Morgan Chase, is “urging investors to sell stocks on any bounce”…

J.P. Morgan Chase has turned its back on the stock market: For the first time in seven years, the investment bank is urging investors to sell stocks on any bounce.

“Our view is that the risk-reward for equities has worsened materially. In contrast to the past seven years, when we advocated using the dips as buying opportunities, we believe the regime has transitioned to one of selling any rally,” Mislav Matejka, an equity strategist at J.P. Morgan, said in a report.

Aside from technical indicators, expectations of anemic corporate earnings combined with the downward trajectory in U.S. manufacturing activity and a continued weakness in commodities are raising red flags.

Major banks have not talked like this since the great financial crisis of 2008/2009.  Clearly something really big is going on.  Trillions of dollars of financial wealth were wiped out around the world during the last six months of 2015, and trillions more dollars have been wiped out during the first 12 days of 2016.  As I noted above, the collective market value of the S&P 500 is down by about a trillion dollars all by itself.

One of the big things driving all of this panic is the stunning collapse in the price of oil.  U.S. oil was trading as low as $29.93 a barrel on Tuesday, and this was the first time that oil has traded under 30 dollars a barrel since December 2003.

Needless to say, this collapse is absolutely killing energy companies.  The following comes from USA Today…

There aren’t many people who feel bad for oil companies. But the implosion in oil prices is causing a profit decline that almost invokes pity.

The companies in the Standard & Poor’s 500 energy sector are expected to lose a collective $28.8 billion this calendar year, down from $95.4 billion in net income earned during the industry’s bonanza year of 2008, according to a USA TODAY analysis of data from S&P Capital IQ. That’s a $124 billion swing against energy companies – and one you’re probably enjoying at the pump. The analysis includes only the 36 S&P 500 energy companies that reported net income in 2008.

If we are to avoid a major global deflationary crisis, we desperately need the price of oil to get back above 50 dollars a barrel.  Unfortunately, that does not appear to be likely to happen any time soon.  In fact, Dallas Fed President Robert Kaplan says that the price of oil is probably going to stay very low for years to come…

You’d expect at least some artificial optimism when the president of the Dallas Fed talks about oil. You’d expect some droplets of hope for that crucial industry in Texas. But when Dallas Fed President Robert Kaplan spoke on Monday, there was none, not for 2016, and most likely not for 2017 either, and maybe not even for 2018.

The wide-ranging speech included a blunt section on oil, the dismal future of the price of oil, the global and US causes for its continued collapse, and what it might mean for the Texas oil industry: “more bankruptcies, mergers and restructurings….”

The oil price plunge since mid-2014, with its vicious ups and downs, was bad enough. But since the OPEC meeting in December, he said, “the overall tone in the oil and gas sector has soured, as expectations have decidedly shifted to an ‘even lower for even longer’ price outlook.”

In recent articles I have discussed so many of the other signs that indicate that there is big trouble ahead, but today I just want to quickly mention another one that has just popped up in the news.

The amount of stuff being shipped across the U.S. by rail has been dropping dramatically.  The only times when we have seen similar large drops has been during previous recessions.  The following comes from Bloomberg…

Railroad cargo in the U.S. dropped the most in six years in 2015, and things aren’t looking good for the new year.

“We believe rail data may be signaling a warning for the broader economy,” the recent note from Bank of America says. “Carloads have declined more than 5 percent in each of the past 11 weeks on a year-over-year basis. While one-off volume declines occur occasionally, they are generally followed by a recovery shortly thereafter. The current period of substantial and sustained weakness, including last week’s -10.1 percent decline, has not occurred since 2009.”

BofA analysts led by Ken Hoexter look at the past 30 years to see what this type of steep decline usually means for the U.S. economy. What they found wasn’t particularly encouraging: All such drops in rail carloads preceded, or were accompanied by, an economic slowdown (Note: They excluded 1996 due to an extremely harsh winter).

The “next economic downturn” is already here, and it is starting to accelerate.

Yes, the financial markets are starting to catch up with economic reality, but they still have a long, long way to go.  It is going to take another 30 percent drop or so just for them to get to levels that are considered to be “normal” or “average” by historical standards.

And the markets are so fragile at this point that any sort of a major “trigger event” could cause a sudden market implosion unlike anything that we have ever seen before.

So let us hope for the best, but let us also heed the advice of RBS and get prepared for a “cataclysmic” year.