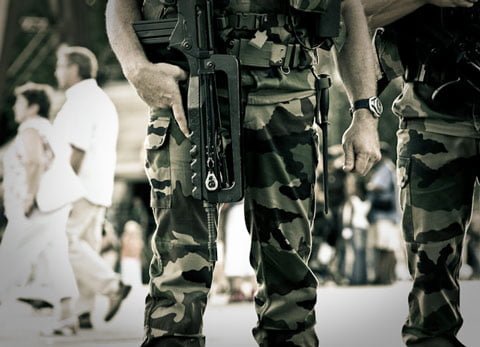 Editor’s Note: The following article has been shared with our community by Selco of SHTF School. His personal experiences during the Balkan war have been documented in One Year in Hell and are an invaluable knowledge base for any serious preparedness minded individual. When riots break out in your city or the infrastructure systems upon which we depend begin to destabilize there will be confusion, panic and violence. Selco explains what to expect from those around you, and what it might look like in what was once your friendly and peaceful neighborhood. Pay attention, because this is how things really go down when the ‘S’ hits the fan.

If you are not eating right now take a moment and watch this video of a monkey eating a gazelle.

It feels very wrong for most people to look at this. This shows how much we are out of touch with nature. Most people want to eat meat but not kill it themselves for example. What happens to gazelle is not good and not bad, its nature. It simply is.

When you find yourself in survival situation you get quickly in touch with nature again, and nature is cruel and concept of fairness does not exist.

It is hard to be prepared for that before you experience it. But understanding how nature really is and that we only live in soft bubble protected from true face of nature, is a first step.

I talk a lot in interview in my course about events that lead to total collapse. Here is one more experience I want to share.

When SHTF started, in the time when great majority of us thought that what was going on around us is something like temporary rioting that got a bit out of control, city services still worked in some parts of the city, everybody was waiting for madness to stop.

In that short period before the S. hits the fan with full force, people usually lost their lives because they did not recognize situation.

People were out rioting, stealing, fighting. But all that was still like “moderate”.

One of my friends was involved in shootings in those days, after looting some stores, he got wounded. Wound was not too dangerous, he was shot in foot.

As I said, most of the city services were still working and trying to bring order to that chaos. City ambulances came and picked him up and they rushed to hospital with him.

About one kilometer from place where he got picked up, the group of people that actually shot him stopped the ambulance on some improvised barricade, first shot the driver and then killed my friend in the back of the ambulance. They killed him little bit slower than driver, and more painfully, they used knives. We got there a bit later, too late.

Now this story may sound confusing to you, you may say “it happens in war” but for 95% of folks at that time it was not war, it was something like violent rioting, and those 95% of folks still trusted the system, had trust in police and government that they are going to restore law and order. People still trusted that ambulances are like “protected” and nobody will stop them, not to mention shoot at one.

In this story here that wounded guy and ambulance driver simply did not recognize situation. He was a nice guy, why would this happen to him? Back then I probably would go with ambulance as well if I was shot. It felt very wrong that this happened but was one of first wakeup calls that fair and unfair are concepts of the past.

My friend in the first place should not have been there in that time of chaos. Ambulance driver should have said ”screw it” take valuable medicines and go home at first signs of real violence and total collapse. He did not. It is easy to call him hero and maybe day before or hours before he helped save life of someone else but it was still too high risk to be out at this point in time.

It is easy to say that now, in those time we all still called things by old names, police, trust, government, law, system, penalty…
If that happened maybe day or two later my friend would have crawled and treated his wounds alone, or driver would have refused to drive, or…

Few days after that event s. hit the fan with real force, and nobody had illusions anymore that something temporary is going on or that things get back to normal.

But point is that lots of people died in that short period before realizing that things aren’t the same. You can not still believe in good of people around you, but most people did. This ambulance event was one of many that ended with similar deaths.

So next time, when some rioting erupts in your city, some violence after football game, or some protests because high unemployment or similar and you hear gunshots and screams, and words about people being killed on the streets, stores being looted, you need to hope that it is temporary disturbance but you can not trust in that.

Be suspicious, trust in your bug out bag, trust in your storage, trust in your weapon. Do not go out just “because everyone goes out”. Avoid being greedy and go looting to have a bit more, even if it sounds easy, you prepare to not have to go out.

When you realize how random and brutal nature and violence is, then you realize you do not prepare to be hero, you prepare to survive. That ambulance guy could have helped many more people in later months when we were fighting for survival if he would not have died. But back then, we did not understand situation.

If you experienced situation that reminded you that fairness and unfairness are just concepts in our “civilized” world, please share in comments.

The Reality of Combat: “Everything That You Have Prepared and Stored for SHTF Will Be Pushed to the Limit”